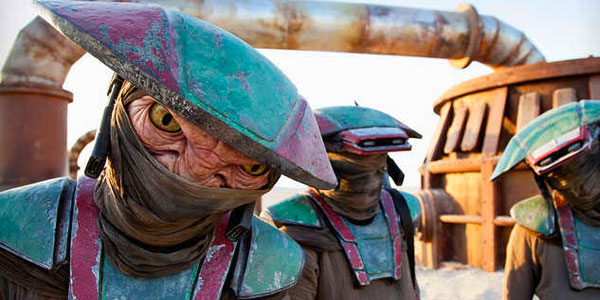 The mystery box might have gotten the better of me, and many other Star Wars toy collectors.

**THIS POST CONTAINS WHAT MAY BE CONSIDERED SPOILERS FOR STAR WARS: THE FORCE AWAKENS.  READ WITH CAUTION.**

It’s always a strange phenomenon to buy toys and action figures based on new characters or an unseen property.  Sometimes it pays off, because a cool looking toy will wind up being based on a really awesome, all-time fantastic character (see: The Force Awakens‘ Kylo Ren or Rey).  Other times, a potentially awesome character will fail to live up to that potential on the big screen.

Captain Phasma is the prime example of this, a character who looks awesome and caught the adoration of many a Star Wars fan before we got to see her on the big screen.  As it turns out, she’s pretty much wasted in her very small role in The Force Awakens, and so we are left with a lot of really cool action figures and collectibles based on, in essence, a non-starter of a character.

Phasma may be the most glaring victim of pre-release hype not following through in terms of The Force Awakens, but some other examples are even more extreme.  Take Constable Zuvio, the Jakku peacekeeper who received TWO action figures from Hasbro already, despite the fact that he has been removed entirely from the final film.  In fact, I cannot for the life of me even think of where he’d fit in, making me think his entire scene wound up on the cutting room floor.

Such is the risk we run, buying products based on unknown characters.  I doubt anybody thought the Crimson Corsair or Sarco Plank were going to be big time players in the film… but the amount of characters– minor to not-so-minor– who appeared only briefly on screen (if at all) and already have an action figure or two on retail shelves is a bit surprising.  How does this happen?  There’s a few big factors.

The main reason is the fluid nature of blockbuster filmmaking in the modern age.  It’s no secret there have been major changes to The Force Awakens during every step of its production cycle, and looking at the final film, it’s evident there’s a lot of deleted scenes which didn’t make the final cut.  This explains the absence of characters like Zuvio, as well as the weird, incomplete arc of Finn versus Phasma (which is looked at in wonderful depth by Devin Faraci at Birth Movies Death).

But it doesn’t end with the ever-morphing production of the film itself.  Hasbro and other Star Wars toymakers are affected by the very same mystery box that we experience as fans.  Hasbro has a solid working relationship with Lucasfilm, but when it came to The Force Awakens, the team at Hasbro had shockingly little to work with.  They only knew the same boilerplate plot synopsis we did, and the source material they received from Lucasfilm didn’t provide the full context of each and every character, just a visual and a short one sentence bio.  So in essence, Hasbro had to make their best guesses, and as they stated at New York Comic Con, that mostly boiled down to a combination of who they thought would be important, who had a cool, toyetic character design, and a healthy dose of blind luck.

And as far as the vehicles in Hasbro’s toy line– the lion’s share of which do not appear on screen– that most likely comes down to dollars and cents.  I’m sure there’s a First Order Snowspeeder also on JJ Abrams’ cutting room floor, but I’m equally confident that some of Hasbro’s other vehicles (such as the straight-up Clone Wars recasts) were never intended to be featured in the movie.  It’s actually a bit surprising the number of people I’ve read online upset that these repainted vehicles from a 5-year-old cartoon show weren’t seen on the big screen.  I thought that would have been more obvious.  These recast vehicles were a means for Hasbro to save on tooling costs while providing a larger overall scope and additional price points in their toy line.

None of what I’m saying is intended as a criticism of Hasbro or Lucasfilm, just an instance which I find rather interesting.  Just as much of the plot of The Force Awakens can be viewed as a string of purely coincidental circumstances, the Star Wars toy line’s past year has been fairly coincidental as well.  I’m sure now that some of the secrets of the new trilogy have been revealed, the upcoming Star Wars toys will fall a little closer in line to the source material, but for now what we’re seeing is an interesting mix of products, about a third of which is never featured in the film itself.

The obvious danger of this is, with such a litany of minor and deleted characters on the toy shelves, The Force Awakens line could get jammed up.  I’m already seeing the Black Series Zuvio figures starting to accumulate at Target stores, and if a bunch of jilted collectors decide to return him post-movie, he could cause a serious overstock issue, making it difficult for stores to sell through inventory and receive the later waves of figures.

Though in the end, a cool looking toy is a cool looking toy.  Yes, Phasma got the short shrift on screen, but her design is awesome, and she makes for a hell of an action figure.  The importance of imagination has always been a big part of the Star Wars experience, especially in terms of the toy line.  I truly believe characters like Boba Fett would not have garnered the sort of multi-generational following he has, if we hadn’t all been coming up with our own adventures for the Bounty Hunter, playing with our Kenner action figure.  Will the same thing happen with The Force Awakens‘ minor and cut characters?  The existence of the new expanded universe could help or hurt, as it fills in the blanks and provides histories and adventures for many of the film’s minor characters.

I’d like to think imagination will still win in the end, that Zuvio and Phasma and all the rest of the weird and cool characters who may not matter too much in the film will find a bigger role in kids’ play sessions.  It would be another way The Force Awakens echoes the original Star Wars, as a new generation of young fans build their own galaxy and expand upon the film (and the expanded universe, for that matter).  That would probably be the greatest throwback of all.