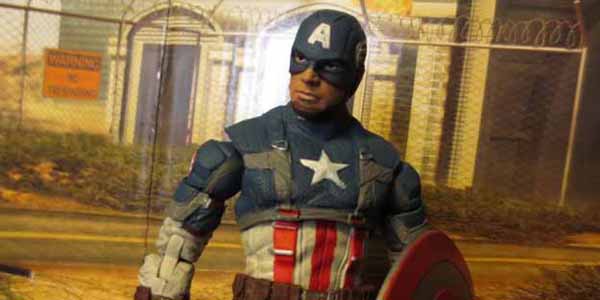 Every solider needs a uniform.  And a good action figure.

I really loved Captain America: The Winter Soldier, and one of the many things it inspired in me was a desire to rework Hasbro’s fairly lacking WWII costume Captain America Legends figure.  While the sculpt on that figure is very nice, he suffers a number of problems that kept him from feeling like a great, display-worthy figure.

For my custom, I took a long look at that figure and decided what the specific issues were, and then fixed them.  Here’s how it went:

This is the biggest problem with the guy– he is dwarfed by other Legends figures!  Individually, though, his parts aren’t bad.  After spending way too long analyzing the figure I realized there were two major issues, both of which could be corrected.  One, his head is small (more on that later), and two, his torso is too short.

This wasn’t the easiest fix, but what I did was swap out the lower torso and upper legs with the ones from the STRIKE suit Cap figure.  The thigh cuts line up fairly well and the pegs match, so that was an easy heat-and-switch.  As for the waist… STRIKE Cap has a cut joint so I popped the crotch piece off from the abs.  For WWII Cap, who does not have a waist cut, I sawed the figure in half at the belt line.

Then, I sanded down the cut area to make it flat, and drilled a small hole in the middle of his torso, from underneath.  There’s a layer of plastic on the figure all the way through at his waist, so I was able to replicate a peg hole fairly easy.  The hole I drilled was actually a little too big, so I filled it in with putty.  It’s not the prettiest thing I’ve done, but thankfully the WWII belt is bulky enough to cover any problems.

Like I said earlier, the head is one of the other big issues with Hasbro’s WWII Cap.  The Chris Evans likeness just isn’t there, and it’s small– so small, it throws off the figure’s proportions and makes him look wonky.  I changed it out with the STRIKE Cap head.

The neck ball on WWII Cap is slightly bigger, so I sanded that down so the new head would fit.  Then, I used a knife to trim off the exposed ears on the STRIKE head.  I decided to sculpt the ear covers on my head, but you could just as easily trim them off the WWII figure, or just sand down and paint over the ears themselves.

Once the head was done, I popped it in place.  While I could have simply widened the hole on this new head, I filed down the ball on the neck instead, so now I can mix and match between the masked and unmasked STRIKE heads on the new figure.

The slight increase in head size makes a world of difference for this figure, and allows him to strike a much better, very heroic silhouette.

Problem 3:  He can’t Lower His Arms

I can’t take credit for this one, it was all Hasbro!  While the Winter Soldier Legends version of WWII Cap is a recast of the previous sculpt, Hasbro did tweak the arm design, setting the shoulders farther apart.  This not only lends more heroic proportions to the figure, but lets him rest his arms at his sides, not extended at a 45 degree angle from the body.

The simplest thing to fix is the color.  Cap’s WWII outfit was a faded grey-blue tone, while Hasbro opted for a more royal blue.  The darker plastic makes a nice base though, so I mixed up my color using Folk Art paints, and painted a few light layers on top– this gave a reverse wash effect, with the darker plastic still coming through slightly to add shading to the outfit.

I used a similar color paint, with some silver mixed in, to repaint the helmet, and painted the “A” symbol and chest star over in white.  The wings on the side of the helmet didn’t come out perfect, and I may repaint them, but they don’t take too much away from the overall effect.

Oh, and I added the middle red stripe on Cap’s abs, in between the red suspenders.  There’s plenty of room, and it’s a nice, simple bright red.

This might sound like a lot of work, but I managed to finish this guy up in less than 5 hours, start to finish.  I’m really happy to finally have a very nice looking version of my favorite movie version of Cap, and he fits in great with the rest of his cinematic Avengers. 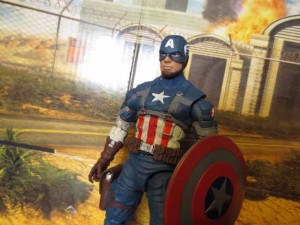 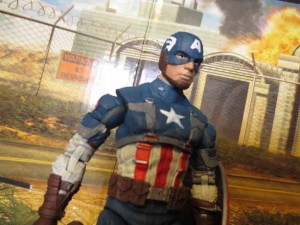 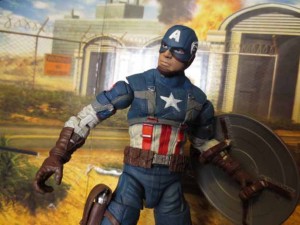 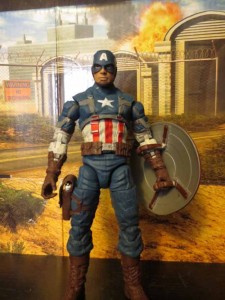 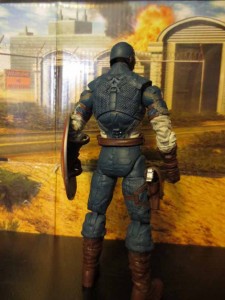 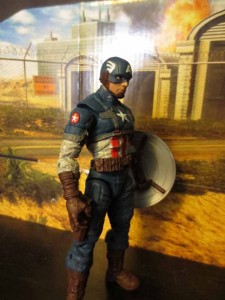 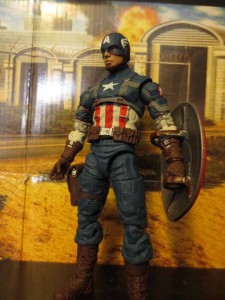 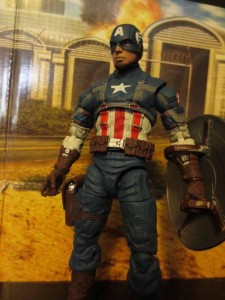 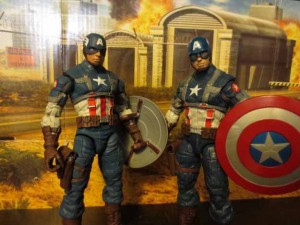 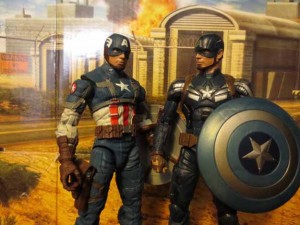 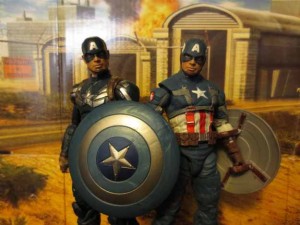 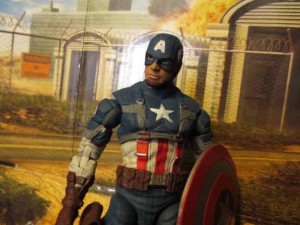 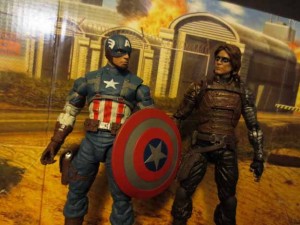 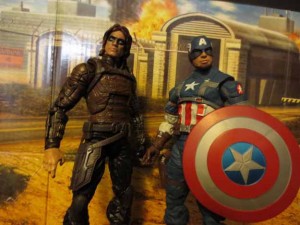