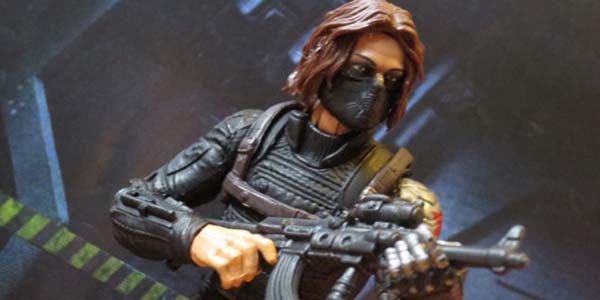 Since I first saw Captain America: The Winter Soldier back in April, I’ve been itching to remake the titular anti-hero in Marvel Legends form.  Hasbro released him as part of the second wave of Captain America Legends, and he’s pretty good… but some wonky proportions and off-model coloring left him just shy of being truly great.

The Winter Soldier custom I did actually kind of fell in my lap by happenstance.  I found the figure on the cheap at a local store, and picked him up, mostly for the SHIELD Mandroid piece and his lower body (I wanted to beef up the legs on my Star-Lord Legends custom).  But since I had enough parts left over, I decided to finally take the plunge and make a new Winter Soldier, too.

I started by adding the pelvis and hips from Star-Lord (mostly because I had them available, and their skinniness would be masked by Bucky’s belt).  I added the thighs from STRIKE Suit Captain America, which are much shorter than Bucky’s own thighs, reducing the height of the figure.  Yea, they’re kind of off-model, but I’m going to paint them black anyway, and the height and shift in proportions really makes a world of difference on this figure.

From there, I raided the parts bin to find a better gun for my figure, and we were in business… almost.  I was going  to call it a day with a simple, quick Winter Soldier kitbash, but there was one more thing I wanted.  Hasbro gave us a fully masked head, and an alternate unmasked version with their figure… but not a half-masked head, the look Bucky wore for most of the movie.  So I made one of those, too.

I started with the two factory-released heads, and sliced each of them in half with a Xacto knife.  Since they’re the same character, Hasbro did a good job of keeping proportions consistent, so all I had to do was try my best to make the same cuts on each head and they’d line up okay.  I screwed up a few times and cut one head wrong, but after some trimming I got them synched up pretty well.  I’d always suggest, when cutting parts to fit like this, make sure your first cut leaves excess room so you can go back and trim more, bit by bit.  There’s nothing worse than cutting too deep the first time and getting stuck with no useable parts.

Once I had both halves of the head cut to form, I glued them together and bound them with rubber bands to hold tight.  After an overnight dry, I popped off the bands and used some quick dry resin to fill in the gaps where I messed up my cuts.  This has the double effect of further bonding the two halves of the head, so, score!

Since both heads were sacrificed to make this version, I also trimmed some of the hair off my second hair piece, and slid them onto this head, to have Bucky’s hair drape closer to his face like in the movie.  It’s a minor change, but I like the result quite a bit.

From there, all my Winter Soldier needed was a paint job, covering up Hasbro’s brown shirt with an on-model black one, and a quick black paint job on the face mask to cover up the resin.  Most of this figure is still just like the Hasbro one, really… he’s a very good figure, and I wanted to accentuate what Hasbro’s team got right.  But I think these few little nips and tucks really go a long way in making this guy look much more screen accurate… or, at least, pretty badass. 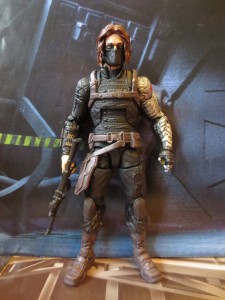 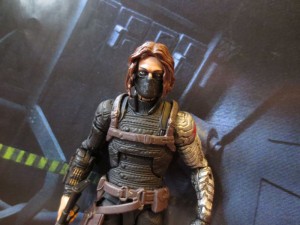 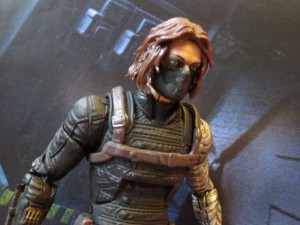 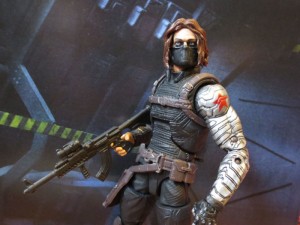 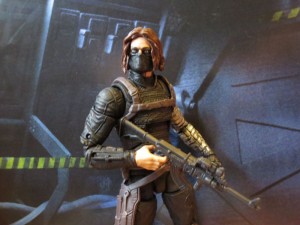 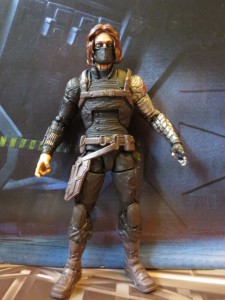 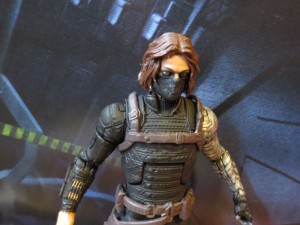 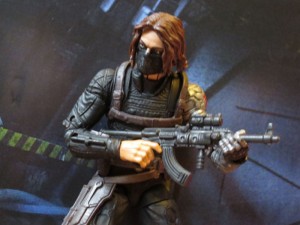 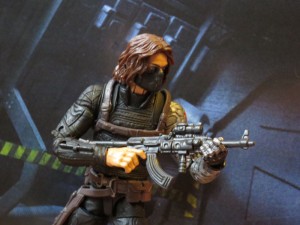 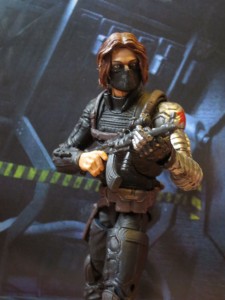 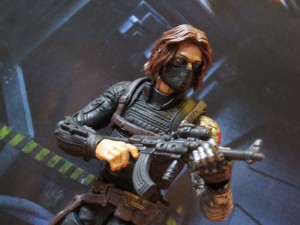 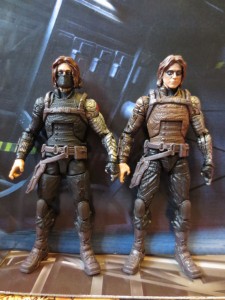 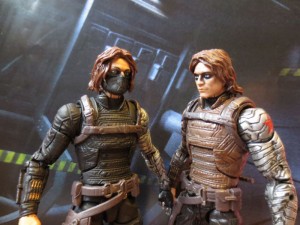 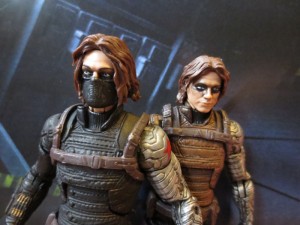 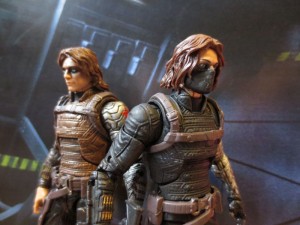