It’s Anton Darhk, Speed dads and sisters, protecting you from yourself, and Red Arrows in this week’s CW/DC TV Roundup!

Legends of Tomorrow: Season 3: Episode 13 “No Country for Old Dads”

As usual, Legends of Tomorrow is fun and funny but nothing really struck me about it until the second commercial break. However, Legends doesn’t put its best foot forward when there was all the opportunity in the world to develop the adult version of the Nora Darhk character played by Courtney Ford. In order to avoid Damien interacting with his younger self and changing his future, Nora and a captured Ray are tasked with going back in time to rescue a scientist that Damien Darhk killed in 60’s before he can actually succeed. While there, their time travel device is damaged and Ray and Nora are forced to work together to try and escape Damien’s younger self, rescue the scientist, and return to the present. Here I was interested in how Nora Darhk was going to work as a character without Damien, and I was actually enjoying seeing her making moves independently and interacting with Ray, and all the sudden Damien shows up and gives her a safety net when she was doing a fine job, basically implying that the 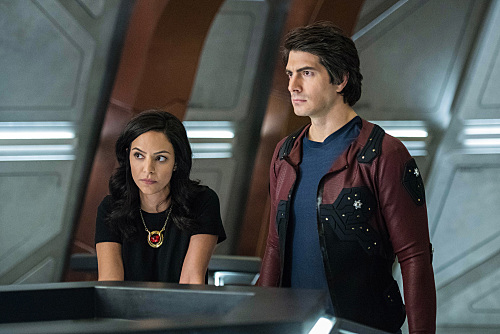 character can’t even stand up on her own. Then the whole thing goes into a daddy issues subplot where she whines about how grown up she is, and I can’t care because the episode was actually able to show her doing things on her own and they opted instead to bring daddy Darhk in, totally invalidating the creators’ faith in the character.

Besides that the episode is very revealing of the main plot of the season, identifying the purpose of the anachronisms, the origin of the totems doing damage to Darhk, and the true danger of Malus. “No Country for Old Dads” sets up the pins for the season finale, reintroduces Wally, and has a few genuinely funny moments, but besides doing all that it’s just a passable story with a big missed opportunity.

This is the kind of story that only the Flash can tell. A nuclear bomb has detonated, and in a rush to stop the explosion Barry activates his new untested ability, which is unsurprisingly called Flashtime. Flashtime is characterized by Flash actually going so fast that it seems like the rest of the world has frozen. It doesn’t affect speedsters in the same way though, which means that anyone with access to the Speed Force can take advantage of Flashtime. That also means that the episode takes place in the span of a millisecond, just a fraction of a second. This is a mind-boggling concept which shows just how alone Barry can really be sometimes. What’s so unnerving about the episode is the incredibly basic villain; just a psychopath with a bomb and a creed. It highlights just how fragile the whole thing is, and it allows for Barry to fully contend with his high chance of 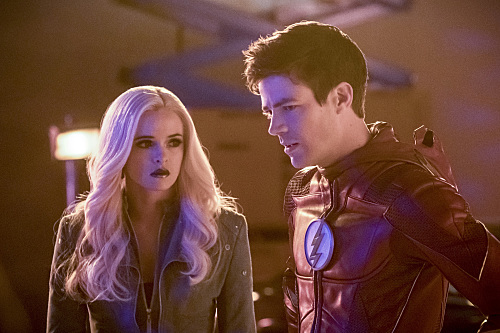 failure in a way that is convincing. We know that Barry will make it out and probably save everyone, but the episode makes the whole proceeding a battle. The story is literally the speedsters trying every way they can think of to the save the city and consistently failing as their stamina runs out. We see how things work theoretically, then we can see the application, and the whole thing is hindered by Flashtime, the only reason everyone isn’t already dead, and then they have to think of something new. The best part is that Barry only has a limited time to interact with his teammates, since the strain on the body of a nonspeedster is too much, so the questions he asks and the methods they try are time sensitive. Barry is separated from his team all at once and he has to use his own wits to solve the problem. The finale culminates in a big colorful spectacle that highlights the true scale of the Flash’s insane universe, just as the tension seems to reach its breaking point. This one had me biting my nails and I can not get enough of the Flash pushing into such abstract territory. Seriously, Flashtime may be loaded with coincidence and convenience and it could quite possibly break the show, as far as tension is concerned; but “Enter Flashtime” is so absolutely off the rails crazy and hard to comprehend that I can’t help but applaud such a concept as an episode that’s setting is the single micro-second before a nuclear explosion. Yeah there’s a lot of exposition and the Jesse and Harry scenes didn’t really pay off till the end but this was such an incredible concept that I couldn’t even be bothered by such minor missteps.

So…Annissa knows her dad is Black Lightning and so Jefferson isn’t sure if he should allow her to do the same thing that he doesI’m not really sure what “Black Lightning” wants at this point, but for being a show that I’m complimenting for breaking new ground they seem to be running right over some cliches that are too thin to keep from breaking. A few highlights come from the “Protecting you from yourself” schtick which is said something like twice in the episode and I thought at first that it was highlighting the hypocrisy between Jefferson’s words and actions, but instead, it’s played off laughably seriously. There’s also like an odd tug-of-war between Jefferson and Lynn over who should shoulder the blame for Annissa ending up like she did which is honestly just game of rock, paper, scissors to determine who gets to take a turn on the cross; totally discounting the character that I would have to argue is really the only one really worth a damn right now. This pushback from Lynn and especially Jefferson didn’t feel natural and only came off as self-righteous “you don’t get it, you’re just a kid.” These characters are supposed to be smart, yet they don’t break down their reaction to learning about Annissa’s powers in an understandable way and go solely on instinct without even acknowledging how limited their involvement in her choice really is.

I can see why they hired James Remar though. Gambi needs to be a bit of an old war dog, and James Remar is famous for playing really bad guys, and he does it well. This episode, he gets stone-cold. It’s simple, but an effective and very cool scene, but it highlights a big problem that was always going to come around. James Remar is much better at being a bad guy than a good guy, and while Gambi sounds whiny and forced when he’s trying to tell Jefferson not to kill people, he looks like a 60’s era spy killer when he’s casually strolling in to fight clubs, complete with trenchcoat and fedora, and gunning down greasy bad guys in the cash office. Maybe that’s not the point of the character, but it’s by far the greatest asset of him thus far.
Admittedly, by the end of “Equinox: The Book of Fate” I was back on board with Black Lightning though. The ending, with the music and the death and all the tension, is surprisingly well done considering how weak the rest of the episode was. It was all very Godfather, not least of which was due to the level of brutality that was on display. Tobias is far from invincible, and with just one ten minute sequence, Jefferson messes him up. The real power of the ending is how horribly wrong everything goes for Jefferson which leads him to a revelation when it comes to Annissa. By the end of “Equinox: The Book of Fate” Black Lightning finally looked like it had its foot back on firm ground.

I was a bit checked out as this thing started, mostly because I’m kind of sick of things just seeming to not work when they should because of plot reasons and nothing else. It’s Oliver Queen VS the World I guess, but instead of really meaning anything it’s just a reason to artificially extend plotlines and subdue the characters involved. However, this episode has something powerful in it and it isn’t just Colton Haynes (although it is nice to see him.) It’s chemistry because despite all of Arrow’s current faults Willow Holland and Colton Haynes had 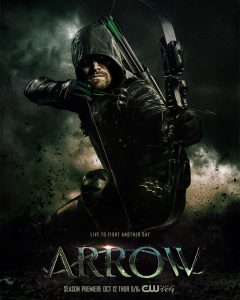 and have good chemistry. Willow Holland mostly just stands around nowadays as Thea, but we get to see her again as Speedy and that alone means that Doppelgänger” is going to get my attention but the fight scenes themselves (with the casino-fight in particular) are actually really good. In fact, the episode had a lot of really cool scenes that were hardly enough to save the season thus far but were still beacons that Arrow might still have some understanding of narrative somewhere just below the surface. There’s a scene where Team Arrow discusses the pros and cons of their goal, and the whole thing is really intuitive and easy to follow logically. Now that we know the stakes we can follow along with the episode’s rules and not feel like we’re being cheated. It does sound really difficult too, and that makes it tense. But this is the setup. It’s hardly the payoff, so it’s easy to talk but harder to do. Luckily the “infiltration” that the scene talks about is also up to snuff and there are scenes specifically between Thea and Oliver that show humanity.

Then everything just does what Arrow does. Double-crosses, threats, “you’re not thinking clearly” insistences; they’re all the oldest of old hats and while I was watching the episode I found myself just remaking the story in my head. Not a great sign. This is far from the worst of Arrow so I don’t want to down it too much, but this is not intuitive storytelling and the show continues to suffer unnecessarily because of it.

Final Word: There’s really nothing to this.  Flash was awesome, everything else had serious ebbs and flows.  Legends of Tomorrow played it safe and missed a few opportunities, Black Lightning pulled it out but far too late in the episode, and Arrow did the same thing it always did which at this point isn’t that good but leaned on a great relationship in the past to bring something Arrow really needed back from the dead (two characters that seem to want to be around each other.) All the episodes told their own unique stories, but “Enter Flashtime” is absolutely insane and mind-blowing.  It’s a big, bright, totally unreal, and the Flash completely owns it.