Cy-Chop Should Have Been A Strong Addition To The Horde 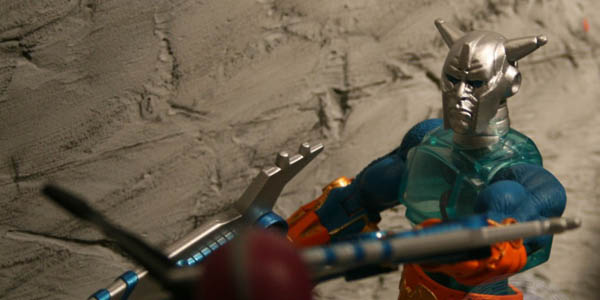 The Horde get a new member in Kronis’ partner-in-crime Cy-Chop, the fifth figure in Mattel’s 30th Anniversary collection, which has delivered figures ranging from the amazing Draego-Man to the much-lambasted Mighty Spector. How does Cy-Chop compare to his fellow 30th Anniversary Masters? Read on to find out. 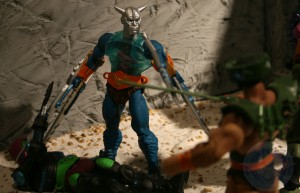 Cy-Chop is an all-new creation for the 30th Anniversary from Mattel’s Terry Higuchi. He takes design cues from 80’s Japanese robots, and the clear body revealing his entrails is a unique way to re-use Roboto’s torso, so big-time kudos for that. The remaining parts are a head-scratcher. The fuzzy legs and arms appear out of place and the scissor hands are 50% too long for many fans’ tastes. I will say, given the parts we see, I am curious as to who Cy-Chop was before his unfortunate transformation.

Like the other figures released this month, logistics is where Cy-Chop really goes downhill. Mattel Design clearly didn’t exhibit much sense with any of these three. Cy-Chop, like Rattlor, features base plastic in black. This was an obvious cost-cutting move, but one that clearly presented a host of consequences. Not unlike Vykron, I have black scratches on Cy-Chops’s arm from being squeezed into the card bubble before the paint had set. 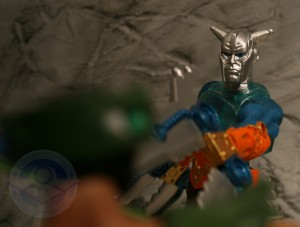 Some drawbacks are even more head-scratching. Cy-Chop features Trap Jaw’s looped, orange belt (with no weaponry to hook in, mind you), under which he hides a FULLY-PAINTED studded belt that no one will ever see. Why paint his belt if hidden by another belt? With so many other cost cuts going on, this seemed like the ideal place to skip a paint app, just like the copious amount of maroon paint used for the black plastic on Rattlor.

Cy-Chop still ranks higher than some of the more questionable choices for the 30th Anniversary collection, however his production issues knock him down a few pegs.  Sadly, the third October figure, Frosta fares even worse… and her problems stretch far past her infamous swapped forearms. Check back tomorrow for the full look at She-Ra’s Ice Princess ally.