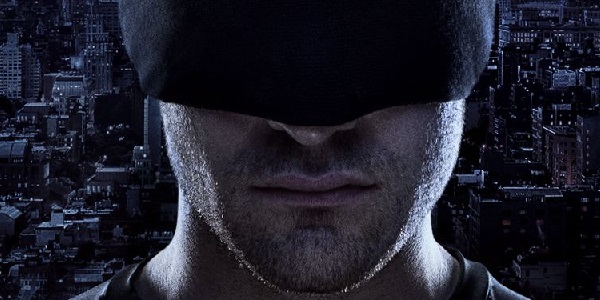 Alright, before we jump in, let’s catch up on some ground I missed in the last article.

The trial scene of “Rabbit in a Snowstorm” plays out in a tense and provocative way. Add in all the extra tension from the brilliant direction regarding Matt’s abilities, and the chance to see Nelson and Murdock practicing their craft in the proper setting, and you have a recipe for a courtroom drama that unfolds in an intelligent and visually stunning way. I should also give deserved credit to John Patrick Hayden as Jack 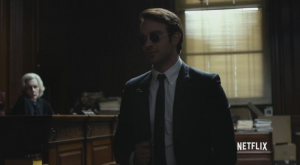 Murdock for playing an everyman character with real grit. It’s this grounded performance that adds drama to the character’s fate, and makes the tragedy that unfolds all the more moving (despite having been done to death).

Now as we enter part 2 of Daredevil (Episodes 4-8), we come fresh off of the reveal of Vincent D’onofrio’s Wilson Fisk. One of the common themes of the comic is how the development of Fisk alongside Matt Murdock, in to the Kingpin and Daredevil respectively, ties in to the fight for the heart of Hell’s Kitchen. It’s an aspect that’s given equal import here as D’Onofrio plays at the same level of subtlety and nuance as Cox’s Murdock. As the character evolves and experiences ups and downs, we find his story to be that of a modern day Kane, right down to how adolescent trauma combined with power can turn a good man in to a monster. He works as the ideal foil to Cox, with a comparable level of characterization and development to allow for more dynamic and well rounded storytelling. As this character begins to come to life, we watch Matt attempt to grow and adapt, struggling with morality when faced with a powerful force with seemingly unlimited resources and survivability.

This struggle challenges both Matt Murdock as a lawyer and a vigilante as the game seems to escalate to levels that couldn’t be anticipated. Watching as the other characters get caught up in this battle of shadows as it comes to light is equal parts engaging and unsettling. Karen and Foggy’s stories start to align following some phenomenally realize 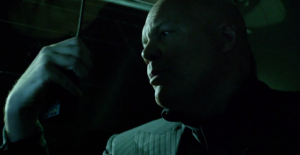 d characterization that strengthens their chemistry. The character of Ben Urich (a real staple from the comics) begins to become more heavily involved, and starts to create a new perspective to view the story from, Rosario Dawson’s Claire Temple gets a lot to do in episode 4, 5, and 6, but seems to all but drop off after that, but it’s the inclusion of Scott Glenn’s Stick that kicks things up in to the stratosphere. His blunt, foul-mouthed, and dangerous attitude creates an unlikely mentor to Matt. It’s a dynamic that comes with some well-acted friction between him and Charlie Cox, as well as some insight in to the origin of Matt’s abilities. His sarcasm, wit, and humor is uncharacteristic of the comic book version of Stick, but Glenn plays up his own version of the character to surprising comedic effect, while still creating tense drama when it’s called for.

The effects are all practical, and give the series a grounded and gritty feel that works great when things are surrounded in urban decay, but have equal impact when contrasted to clean and sterile environment 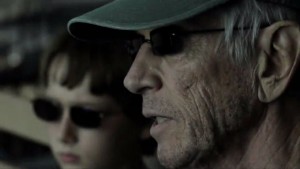 s. It works to build a real difference in atmosphere between the dirty alleys of Hell’s Kitchen that Matt haunts, to the modern penthouses and art galleries that Fisk surrounds himself with. There’s a real visual style here that speaks to the personalities of its characters to create contrasting settings, but still maintain a consistent tone. The fight scenes continue to be out of this world, being equal parts stylish and brutal, and do the credit of referencing Daredevil’s acrobatic origins. There are also some interesting applications of Matt’s abilities being done here, not just to fight or investigate, but to solve practical problems with extraordinary solutions (“Uh, half a box of nails…broken glass…uh, wood, duct tape, old roadside emergency kit, -lot of plastic sheeting-“). All in all, Matt is evolving at a steady pace. Trouble is, he isn’t alone.

Final Word: Daredevil Part 2 (episodes 4-8) brings the heat. The story here is evolution, and it’s just as much about Wilson Fisk’s as it is Matt Murdock’s. Both characters have been fighting from the shadows, but now that things have come in to the light the stakes seem even higher. Wilson’s origin is shocking, but extremely valuable at revealing his character’s motivations. Matt’s past with Stick brings up some questions as to Stick’s motivations, but provides some insight and an entertaining, yet turbulent relationship between the two 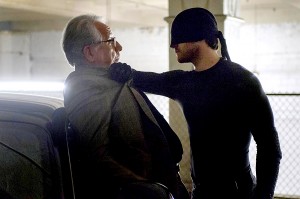 . Foggy, Karen, and Ben don’t seem to be let down in the amount of screen time and development they are getting, despite not having the cool superhero storyline. It’s good to see that the side characters are getting adequate plot points to explore that actually affect change rather than create distractions. Rosario Dawson’s Claire Temple gets a hell of a lot to do early on, and considering it’s Rosario Dawson, she really commits to give a empathetic performance; but it’s this focus that makes her later absence all the more noticeable. Still, the plot is slowly escalating as more and more people are getting pulled in to the blast radius, complicating Matt’s life like never before. No matter how hard he tries, it seems the odds are always stacked against him. It’s this level of insurmountability that makes the comics so iconic, and that same sense of engagement is being mimicked perfectly by the series. I’m anxious to see how it all plays out. And even if Matt is able to beat the odds, there’s no way in hell he’ll come out unscathed. But he won’t give up. Murdocks never give up.