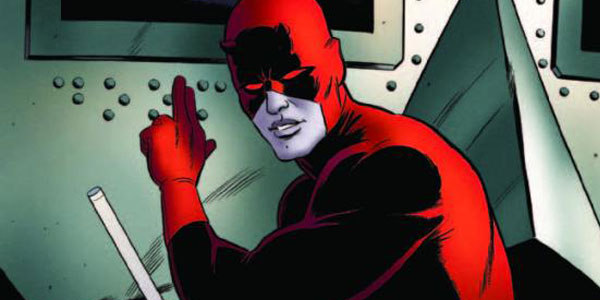 So it looks like Daredevil may end up making the move to Marvel Studios pretty soon.  To recap, Marvel Studios owns The Avengers, and all the other Marvel characters who have been built into a larger, shared continuity… but before the experiment started other studios had snatched up rights to characters like Spider-Man and Ghost Rider (Sony) and the X-Men, Fantastic Four and Daredevil (Fox).  The catch comes that, in order for these other companies to keep their rights, they need a new movie in production every “x” number of years, and Marvel is more than happy to snatch back any unspoken-for rights, as they did not too long ago with The Punisher.

So Daredevil’s number at Fox is almost up. The studio has tried to get a project off the ground, most recently with director Joe Carnahan.  Carnahan was able to put together a proof of concept, revealing his take on the horned hero would have been set in 1973, as Daredevil faced off against The Kingpin (and possibly the gangs from The Warriors)… Check out his sizzle reel:

But it looks like there just isn’t enough time for Fox and Carnahan to get this thing off the ground, so the idea will be scrapped and Matt Murdock will most likely be entering Marvel’s own cinematic universe.  With Marvel Studios just about to kick off the heavily cosmic-themed “Phase Two” of their world-building, where does that leave a street level hero like Daredevil?

I can’t help but think Matt’s adventures could be best told on the small screen, and Marvel has indicated recently they want to expand into TV as well as movies.  Daredevil is in the unique position for a super hero, where his alter ego’s day job as a lawyer could make for some compelling (or at least ratings-friendly) stories and his low-tech vigilante side could probably be pulled off on the cheap.

And TV would give Matt’s best stories the chance to really flourish, and not be short-changed… I don’t think the Elektra Saga, or the Fall of the Kingpin, or even Guardian Devil could be done justice in 120 minutes, but adapt these stories into season-spanning story arcs and they could be pretty great, packing enough fan service to keep comic fans happy and enough emotional gut-punches from the source material to leave a wider audience in shock the way we all were when Bullseye first rammed that sai through Elektra’s chest.

Even going for a more contemporary premise, Marvel could basically adapt Mark Waid’s fantastic current run on the book into a series– the first thing I thought when I read through the first five issues of the book was ‘wow, this would be a great TV show!’

Marvel has been very, very smart in their planning so far, and I don’t see them complicating things too much and cluttering up theaters with a Marvel movie a month anytime soon.  I think TV is a great solution to expanding their universe without hitting audience fatigue at the box office, and while the big screen adventures keep getting bigger and weirder (Guardians of the Galaxy! Thanos!), I love the idea that Marvel’s TV output could be used to dial things back and give the street-level heroes their own chance to shine.