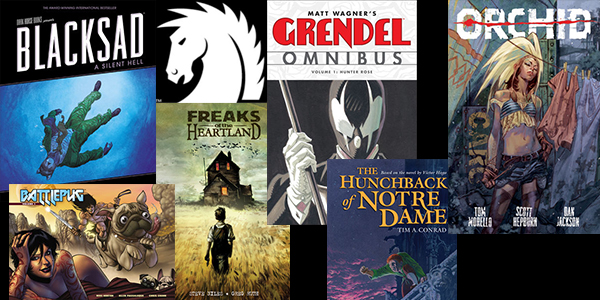 One of the best things about the summer months is always the huge list of trades that Dark Horse Comics releases.  Throughout July and August, Dark Horse will release more than 30 trade paperbacks, hardcovers and graphic novels, and we’ve put together a list of six titles that absolutely deserve your attention. 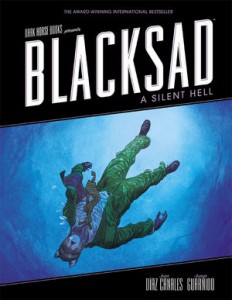 This fourth chapter of the Spanish comic series explores one very eventful night in detective John Blacksad’s life.  The setting is New Orleans, 1956, and Blacksad is hired by a famous record producer to find a jazz pianist who ran out on his pregnant wife.  The plot explores themes of corruption, jealousy, drug addiction and murder, and the cast of characters is just as shady and diverse as ever.  Since every chapter of Blacksad is a self-contained story, you can read this one without any prior knowledge; much like the stories of Raymond Chandler, each book focuses on a case that the main character takes on and the course of events that stems from it.  This book also includes a lengthy afterword called “The Watercolor Story,” in which artist Juanjo Guarnido gives an in-depth look into his creative process and his coloring techniques – a very cool addition to an already fantastic hardcover collection and a fascinating look into the mind of a great artist.  Be on the lookout for Blacksad: A Silent Hell on July 18. 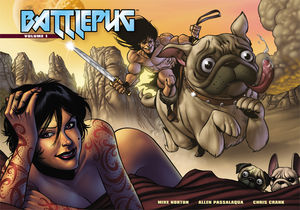 What started as a funny t-shirt graphic from the mind of comic illustrator Mike Norton has become a highly successful webcomic, and now its first year is being collected into a single volume from Dark Horse.  It’s a lighthearted tale of a young villager who loses his family and embarks on a quest of revenge with a lunatic named Scrabbly and a giant pug.  Within the first few pages, a giant baby seal murders a group of innocent villagers and things only continue to get weirder.  Make no mistake though, nothing about this book is a joke.  Norton is clearly a great artist and his storytelling has plenty of humor and heart.  It’s a very quick read at just over 70 pages, but there are some bonus sketches at the end of the book that haven’t been released elsewhere.  For loyal followers of the webcomic, this is a great way to collect the first part of the series that won’t break the bank at $14.99, and for newcomers it’s an introduction to Norton’s bizarre creation.  It releases on June 27, so climb atop your adorable giant pug and prance to your nearest comic shop. 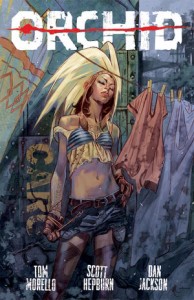 Tom Morello, best known as the guitarist for Rage Against the Machine, started his own comic series Orchid back in October of 2011.  On July 11, you’ll be able to obtain the first chapter of this imaginative title in the Orchid Volume I trade paperback.  The story is at once a social commentary and a fast-paced tale of survival in a world that has reverted back to slavery and where class warfare is the name of the game.  The first chapter centers on two low-class citizens; one is a rebel who wants to rescue his brethren and the other, Orchid, is a prostitute who just wants to survive.  It’s a deeply realized world, and if you’ve missed out on this series now is the perfect time to catch up.  The book includes a few sketches from artist Scott Hepburn, which is really just icing on the already delicious and multi-layered cake. 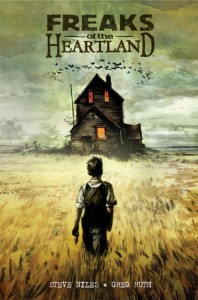 Freaks of the Heartland Hardcover

Freaks of the Heartland is one of those books that remains easily accessible and highly readable while exploring some deep themes like acceptance, forgiveness and what it means to be different.  Steve Niles tells the story of a small town boy who takes care of his oversize younger brother, who spends his days locked up in a shed (think Sloth from The Goonies minus the affinity for Errol Flynn movies).  The small town holds plenty of secrets, as the two brothers quickly discover, and they have to escape a bunch of ignorant townsfolk who shoot first and try to understand later.  It’s hard to say much about this fantastic story without giving it all away, but I’m confident that anyone and everyone can find something to like.  The creepy art by Greg Ruth couldn’t fit this dark, suspenseful tale any better.  Again, we’re treated to some sketches and insight into how the artist came up with the looks of the characters.  The book launches in just a few weeks, on June 27. 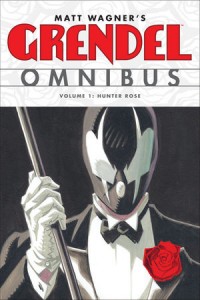 For the first time in its 30-year history, Matt Wagner’s Grendel will be collected in four comprehensive volumes.  The first volume is 600 (600!) pages long and collects the stories of Hunter Rose, the alter-ego of a young genius who turns into a masked criminal mastermind by night.  Grendel isn’t a typical comic book; it combines daring page layouts with a deep story and a black-white-and-red color palette.  Sometimes it’s overtly reminiscent of manga, other times it reads like a hard-boiled detective novel.  As this series has had a plethora of guest artists over the years, you’ll see the work of over five artists in this one volume, including Tim Sale and David Mack.  600 pages of quality sequential art for only $24.99…what could be better?  The first volume of the Grendel Omnibus goes on sale August 1st. 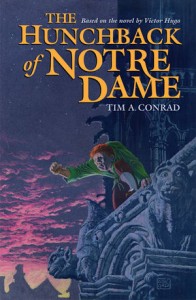 The Hunchback of Notre-Dame

This one caught my eye because I’ve always been a big fan of Victor Hugo’s masterful novel The Hunchback of Notre-Dame.  Artist Tim Conrad, who drew extensively for Marvel in the 1970s, brings 15th century Paris to life with his storybook-like art style in this new graphic novel.  The story of Quasimodo, Esmerelda and Claude Frollo is intact, but stripped down to its bare minimum.  Still, there is a lot to like about this book and the unique art style is worth checking out.  If you’re in the market for a succinct version of this timeless tale, look no further than this graphic novel from Dark Horse hitting shelves on July 18.