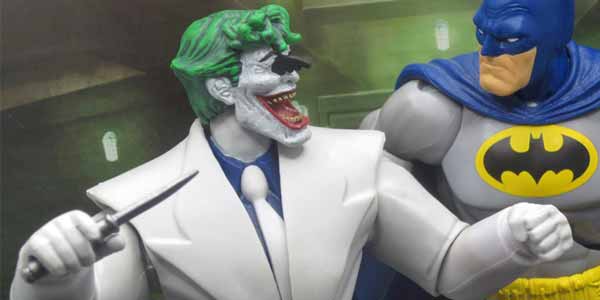 Currently entering its second year, Mattel’s DC Multiverse collection remains a mixed bag.  Despite impressive character selection, some of the figures have featured soft sculpts, sloppy paint, and other shortfalls often seen in mass release toys.  But when they’re on, they are ON with this line, and the best example has been the stunning Dark Knight Returns sub-series, which expands in 2017 with The Joker, as he appeared in Frank Miller and Klaus Janson’s cult classic miniseries.

While many earlier figures made clever reuse of the stocky, muscle-bound proportions of the Masters of the Universe Classics base body (an actually really good analog for Miller’s distinct art style in these comics), The Joker is an entirely new sculpt, like Carrie Kelly Robin before him.  Head-to-toe, he is a perfect rendition of his appearance on the page, all smooth lines and bizarre angles to perfectly represent the white suit he wears during his last stand with Batman.

Even the little things, like the unique shape of Joker’s shoes, does a brilliant job of emulating Miller’s art style, but it’s the pair of heads that really make this figure outstanding.  Joker features two alternate portraits– one much more calm and subdued than we’re used to seeing him (very appropriate for most of his time in the comic), and one caught in the midst of a familiar maniacal laugh.  The laughing headsculpt in particular is amazing, and I love that Mattel didn’t shy away from the most shocking accessory included with this guy when his first prototype was revealed– a removable Batarang that fits in his eye socket. 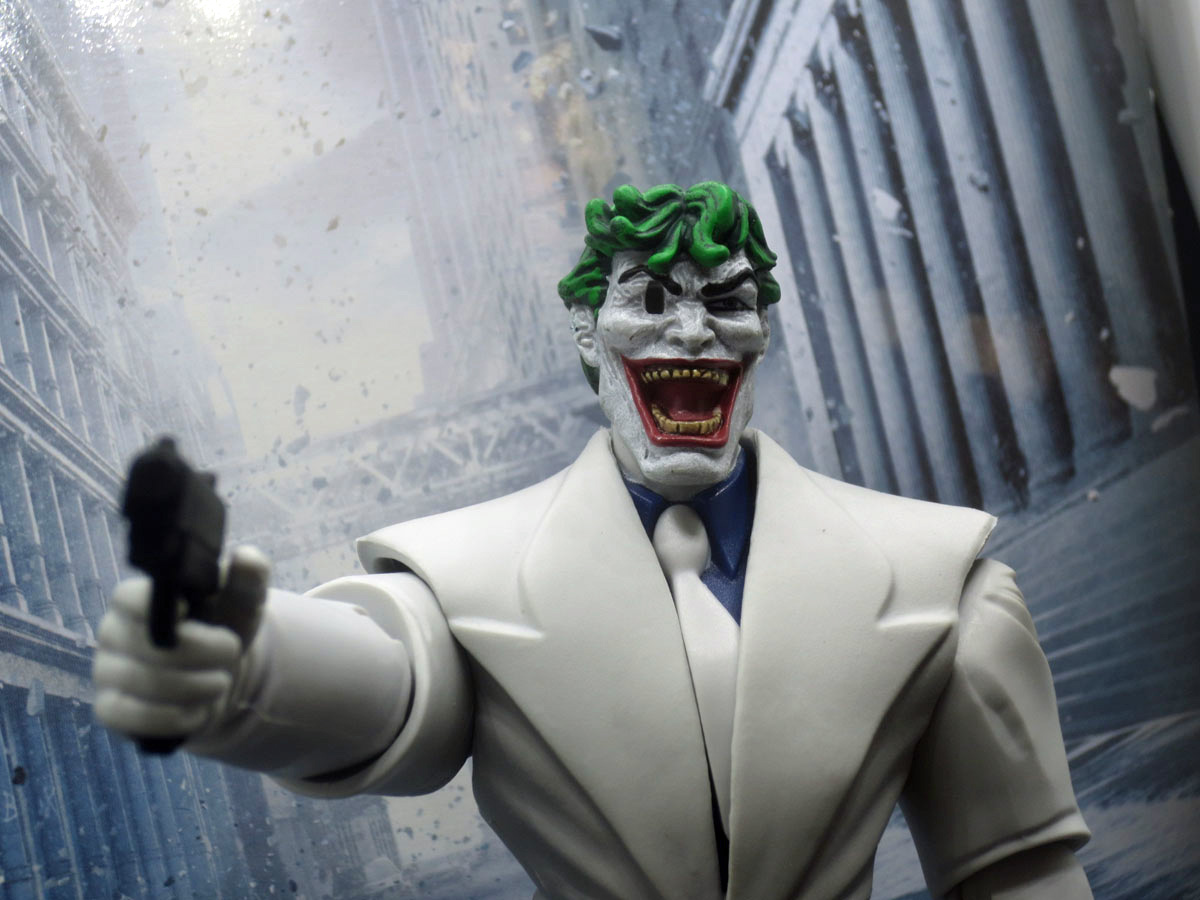 Aside from the two heads and mini Batarang, Joker also comes packing a stylized pistol and a switchblade. Both fit well in his right hand, while his left is permanently sculpted into a fist. I’m not typically a fan of fists with no other option, but it works okay to strike a few dynamic poses with this figure.  The other thing that helps in this regard is Joker’s articulation, which is useful, if less plentiful than many Multiverse figures.  He sports a ball joint neck (which allows the heads to pop on and off with ease), an ab crunch beneath the rubber suit jacket, ball shoulders and hips, half-ball elbows and knees, swivel wrists and hinged ankles.

It’s kind of mind blowing that one of Mattel’s many accomplishments within the 6″ DC universe has been to deliver sets based on both of DC’s iconic super hero deconstructionist classics.  Watchmen was one of my favorite lines ever from Matty Collector, but even those great toys can’t hold a candle to the Dark Knight Returns collection.  The clever parts reuse on the early releases was a lot of fun, but it’s the uncanny translation of Miller’s artwork into toy form in these portraits that truly makes for some exceptional action figures.  The Joker continues that winning trend.

I’m happy to have this figure, who feels like the last major player we need to call the DKR set complete.  But now more than ever, I feel that if Mattel invested the same passion and attention to detail so evident in the Miller figures into every figure they make, then DC Multiverse could easily be one of the BEST toy lines on the market. 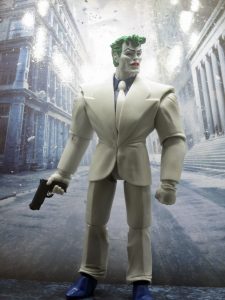 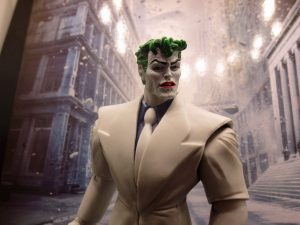 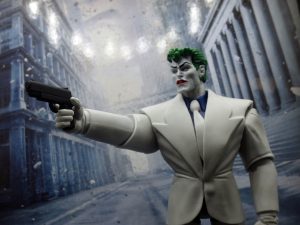 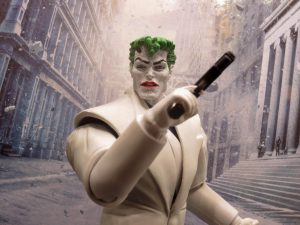 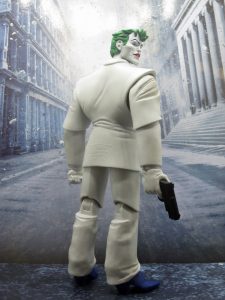 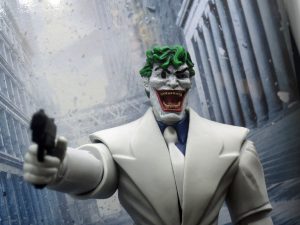 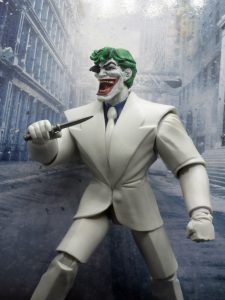 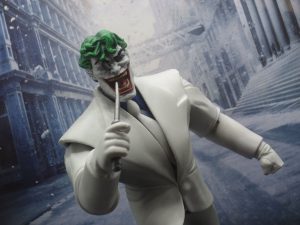 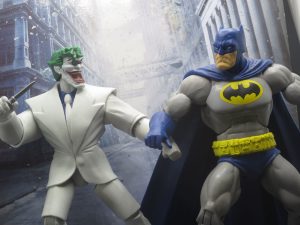 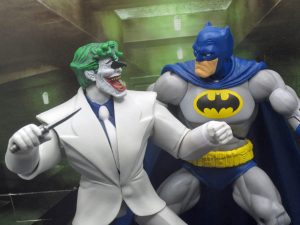 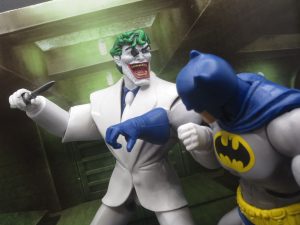 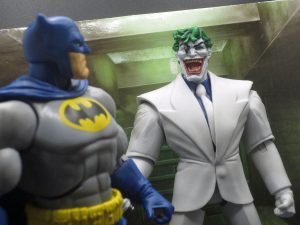 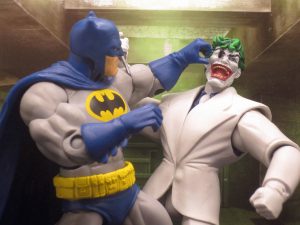 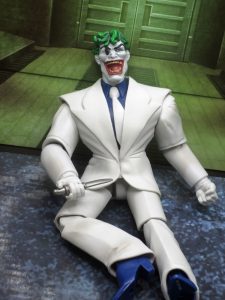 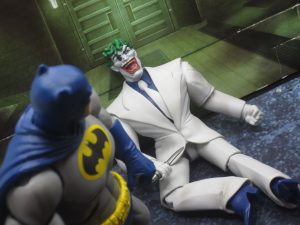 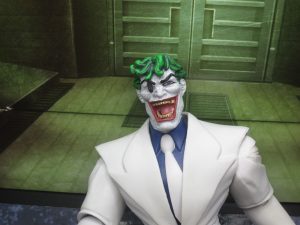