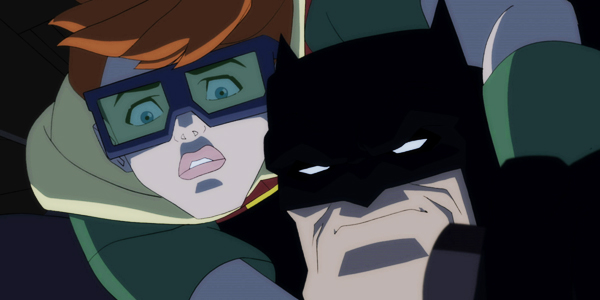 Last September, DC released the first installment of The Dark Knight Returns; a two-part animated film based on Frank Miller’s 1986 comic book series of the same name – widely hailed as the greatest Batman story ever written.  Today, the Blu-Ray/DVD release of The Dark Knight Returns: Part 2 wraps up the experience in an epic fashion, and offers the best animated movie featuring the caped crusader since Mask of the Phantasm. 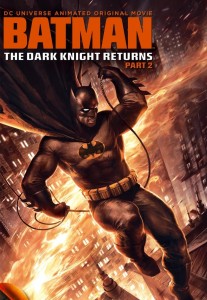 Honestly, I went into this one with a bit of apprehension.  Along with every other Batman fanboy in the world, I’ve been secretly pleading for a film-iteration of The Dark Knight Returns since I first read the series so long ago.  The story of a retired Bruce Wayne’s return to form was so timeless and brilliantly presented that you couldn’t help but think “this is going to make an amazing movie someday” while thumbing through each page.  All ten of the big-budget blockbuster films based on Batman in the last 25 years have missed the mark (with some way farther off than others to be sure) as no director has been able to perfectly capture Batman’s persona as succinctly or effortlessly as Miller.  When DC/Warner announced an animated feature based on the iconic narrative, it seemed destined for perfection – after all, with animation the sky is the limit in terms of scope and direction.  Unfortunately, the first chapter fell short of expectations.  Wooden and uninspired voice acting, some odd pacing issues and, for some reason, a complete lack of the book’s excellent first-person narration from Bruce Wayne marred what could have been a flawless iteration of TDKR.  Suffice it to say, once it was time to watch Part 2, some of the excitement had vanished.

To my surprise, whether I had simply become accustomed to the style of the first film or the cast stepped it up a notch, the second chapter was a huge improvement over the first in all regards.  The voice acting was stepped up a bit, everything was more streamlined, and the action was intense.  Granted, the second half of the comic series carried the most weight, but this release was really well done regardless of the memorable source material.  With most of the important plot points set up in Part 1, director Jay Oliva can play this one a bit more loosely.  Sure, there were a few questionable changes and aforementioned issues that prevailed but, by and large, it’s a winner.  It’s actually a little odd (aside from the obvious cash-grab) that Warner would divide this into two releases instead of just releasing a 2.5 hour epic.  It would have given the action time to ramp up instead of having a stand-alone chapter that’s largely dull and one that’s action-packed. 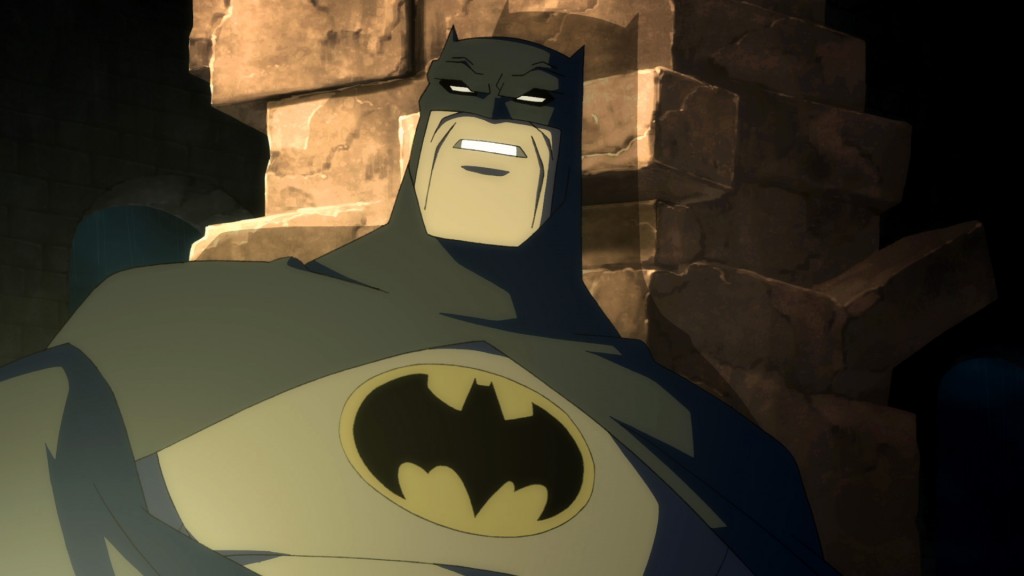 In case you’re unfamiliar with this part of the story, Batman has returned from retirement to clean up Gotham and just defeated the leader of a powerful gang in the previous chapter, gaining the attention of the public, Gotham’s new Police Commissioner (who has no tolerance for vigilantism), and the Joker.  After years spent in a listless, catatonic state, the re-appearance of Batman spurs Joker into action – and he’s eager to make up for lost time.  Voiced by Michael Emerson, he is a far cry from Mark Hamill’s interpretation.  Appearing much older and a bit less manic, Emerson’s voice work lends Joker a much needed straight-forward, somber tone as he formulates what he knows will be his final crime spree.  The inevitable showdown between him and Batman is excellently done and, while the events leading to it are slightly different, the casualties left in its wake is just as high.  Still missing from the sequence though is the narration.  Batman’s inner dialogue in the book is one of the most interesting and memorable aspects.  Gone is his constant dwelling on his reaction time being slower and his body being older and weaker.  It would have played particularly well throughout this scene as Bats wrestles mentally with whether he should break his “one rule” and whether the world would have been better off if he had been able to bring himself to do it years ago.  To that point, Peter Weller (of Robocop fame, who voices Batman) seems much better suited to deliver narration lines.  His voice comes across as stiff and solemn, even when the character is seemingly enraged and intimidating.  His range is a bit wider than it was in Part 1, but unfortunately still sounds phoned in. 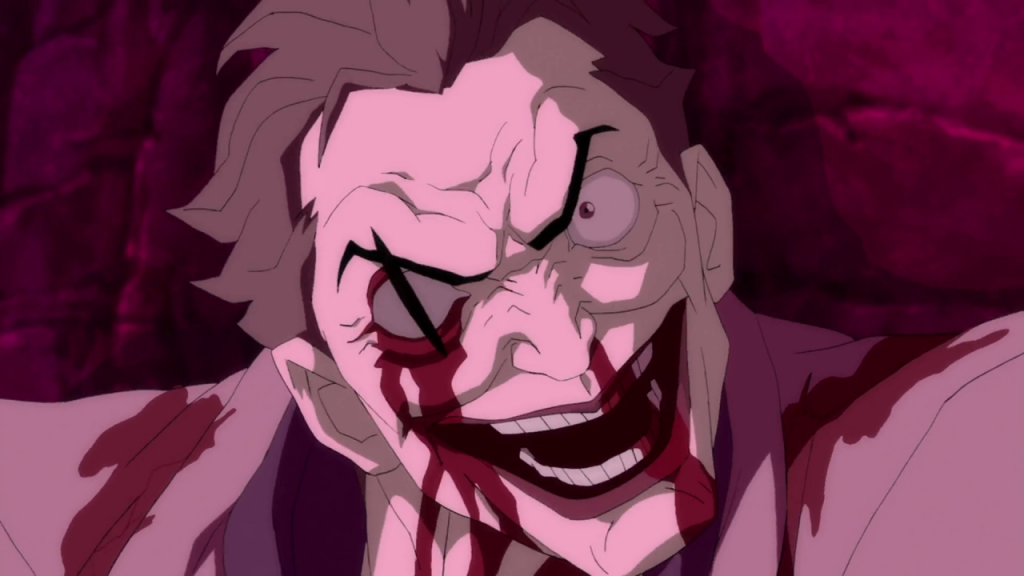 Meanwhile, Superman has been busy trying to end a conflict between the U.S. and Russia.  Anyone who’s read the source material knows that Supes plays a huge role in the story and he is portrayed perfectly here.  He absolutely looks the part, closely resembling the version that Frank Miller had imagined, and Mark Valley was a great choice to voice him – with a voice that’s authoritative and slightly cocky.  The story establishes that, ten years prior, the U.S. government had forced all super-heroes into retirement but kept Superman around as a puppet of the establishment.  Clearly he and Batman have some differences in ideals which play out in a spectacular finale.  One of the scenes I was most looking forward to seeing animated in this film, aside from the Joker’s disturbing last stand, was Superman diverting the nuclear warhead that was launched by the Soviets.  He detonates the bomb in space and, caught in the wake of the explosion, falls to Earth frail and dying.  This sequence is handled wonderfully right down to Supes grasping a sunflower with his skeletal hand and watching it wilt as the effects of the blast cast a nuclear winter over the city.  In the book, readers experienced a genuinely emotional scene as Superman pleads out loud to be kissed by a ray of sunlight and be restored.  In the film however, he just kind of…gets better.  I’m really curious why they went that route. 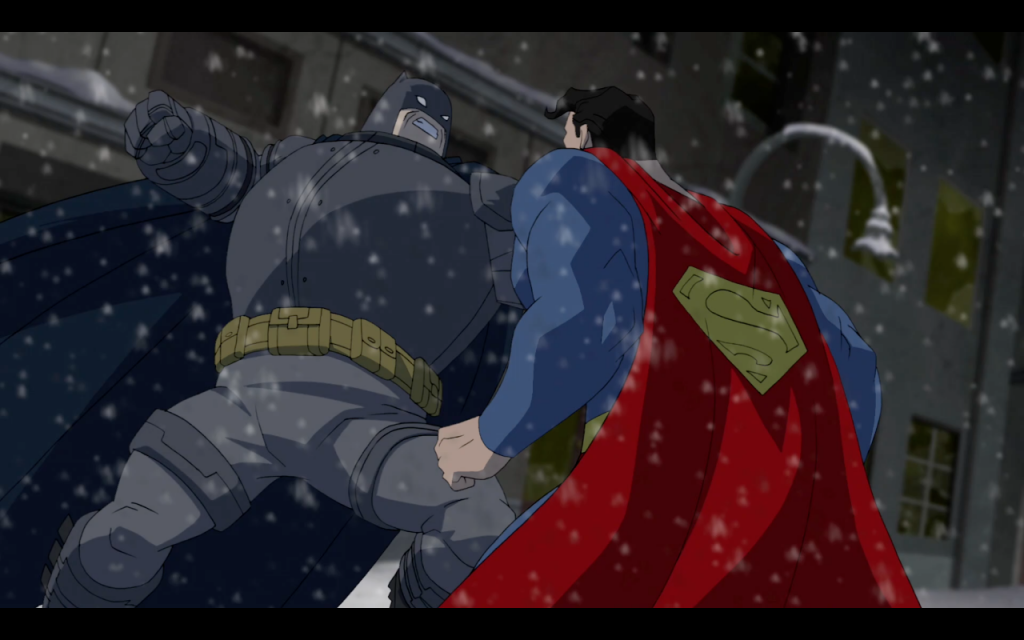 Ultimately though, the battle between Superman and Batman is where The Dark Knight Returns: Part 2 kicks it into overdrive.  After an electromagnetic pulse knocks out power to Gotham, Batman maintains order, uniting rival gangs and citizens alike.  As other areas of the country descend to chaos and anarchy, Batman is a shining example of heroism – and a source of embarrassment to the government.  President Reagan sends Superman to take him out of commission, but Batman already has a plan in place.  Now, the ensuing war that is waged between the two in the streets of Gotham is one of the greatest moments in comic book history, and it’s also the greatest scene in the film.  The reason being is this is the first time the director really brings the movie into its own.  While every piece of the fight presented in the book is still represented, the film version is bigger and better in every way.  You’ll see the two crash through construction sites and building after building while beating the hell out of one another.  The additional scenes presented here really show off what Wayne’s heavy-duty combat armor can do and the results are fantastic.  It’s a shame they didn’t take opportunities to flesh out other areas of the narrative in the same fashion.

Keeping with the animation and character design of the first films, the designers do manage to strike a balance between Miller’s style and the clean look of the original animated series.  The aesthetic is recognizable enough from the source material, including all the super-dramatic posturing, although pushing even more towards the book’s style definitely would have been welcome.  Even with all its missed opportunities though, The Dark Knight: Part 2 is certainly worth watching and stands head and shoulders over the tepid first chapter.  Fans of the original books will certainly find a lot to like here and, if you haven’t ever read the books, go buy the trade paperback immediately and then give these films a watch.