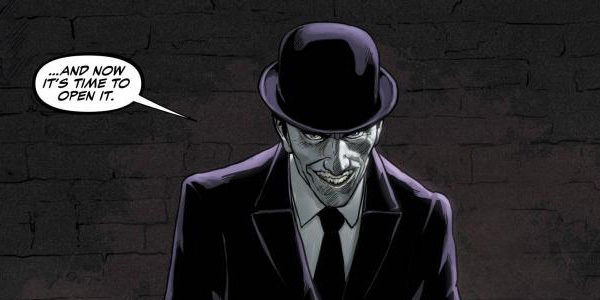 The secret behind the meaning Trinity is finally explained in Justice League 23, leading into a huge reveal for September’s Forever Evil event from DC Comics.

The New 52 started with a one year promise of no other earths and no major crisis arcs. Well they kept their promise for the first year, because during New 52 Year Two we got the Earth 2 book and now wrapping up said year we started the Trinity War comic that took place in Justice League, Justice League Dark, and Justice League of America. This was the brain child of none other than Geoff Johns at the helm writing and he does not disappoint if you are a Johns fan. Well let’s test your knowledge, trinity means three right? Superman, Batman, and Wonder Woman are “THE TRINITY” right? JL, JL: Dark, and JLA that’s three as well? For months since the previews people at comic shops and online world wide were trying to figure out the mystery of what this arc could signify. And why is this mysterious woman in red (Pandora) in the middle of it all. 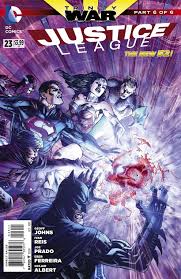 The story started as a few preludes in Phantom Stranger, Constantine, and Swamp Thing, and officially kicked off in a Pandora 3 part miniseries. Now I do recommend picking up the Pandora books just to get you more familiar with the woman herself but it is not a necessity to buy to understand the story. The story flows through 6 parts in JL, JL; Dark, and JL of America numbers 22 and 23.

The main story starts in JL #22 with the strange fellow that resembles Alfred Pennyworth but this guy is pale white and is evil incarnate. This Alfred look alike calls himself the Outsider (not to be confused with the character from Flashpoint) and sets masterful plots in motion to pin the 3 Leagues at odds. While the Outsider sets up his chess pieces there is also Amanda Waller (leader of A.R.G.U.S. and benefactor along with Steve Trevor of the JLA) put a double agent into the ranks of the JL. This double agent is brought to light in JL #23 but I will not spoil whom it is, but I will give you a hint if you remember the Identity Crisis and how they solved that murder mystery you will understand. Superman during one of the battles loses control of his powers and is sidelined after he basically disintegrates the new Dr. Light. All three leagues splinter off into little factions of teams with combined members from each league to try to stop Pandora from opening her cursed box.

In JL #23 we see that the box finds a way to curse the holder into evil and torment of their soul. The only one whose soul can’t be twisted anymore than it already is is Constantine. He is able to hold Pandora’s Box without temptation all while trying to fight off every member of the three Leagues as they try to take it for their own. The mysterious infiltrator is shown, Superman’s sickness is explained, and poor Cyborg is taken down(pretty gruesome what happens to him).Finally all the waiting is over and the conclusion to this story reveals who is pulling all the strings in this war. Enter the Outsider who explains that box was forged by evil and only the most pure of evil can open it. As he opens said box it is shown that Pandora’s Box acts just like a super Mother Box, though in this case it opens up a dimensional portal to another universe. Well we come full circle and remember the story is called Trinity War and let’s see if you were paying attention Trinity means…THREE. So without spoiling who comes through the portal I will say this The Outsider kneels before his master whose initials are TW! 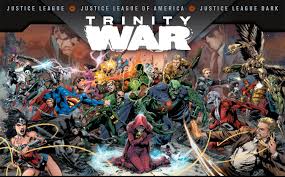 Ivan Reis art is BEAUTIFUL on this book and the splash pages are worth the price of the book along with Johns writing your $3.99 is not wasted here! Pick up Justice League #23 in Comic Shops this week, and this story will continue in Forever Evil #1 in September.