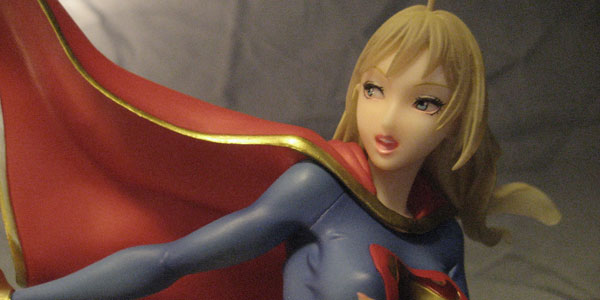 One of the recent additions to Kotobukiya’s DC Bishoujo Collection was Supergirl, who strikes a fun and flirty pose and makes an excellent addition to the “Pretty Girl” series. Master artist Shunya Yamashita does justice to the last daughter of Krypton, and the resulting statue is a must-have for any fans of the DC comics heroine or Bishoujo artwork.

The Supergirl Bishoujo statue features Kara in mid-flight, alongside her companion Streaky the Super-Cat. perched on top of a cloud base, the heroine turns her head suggestively as she flies  away onto her next adventure. Kara sports an excellent Bishoujo (Japanese for “Pretty Girl”) face, complete with the cowlick often seen atop these girls’ heads, and the figure’s overall pose is executed with a wonderful sense of mid-flight motion.

The pin-up girl aesthetic of the Bishoujo series is in full effect with Kara, and gets a little more risque than many previous statues in the Collection– Supergirl is the first DC Bishoujo to sport the upskirt design often seen in anime and Bishoujo artwork, and it’s handled very well. The twist of Kara’s body, combined with the movement conveyed in her outstretched arms and legs makes her look fantastic from any angle and I like that the upskirt effect can either be as pronounced or as hidden as desired, depending on how pervy you want to be with your displays. 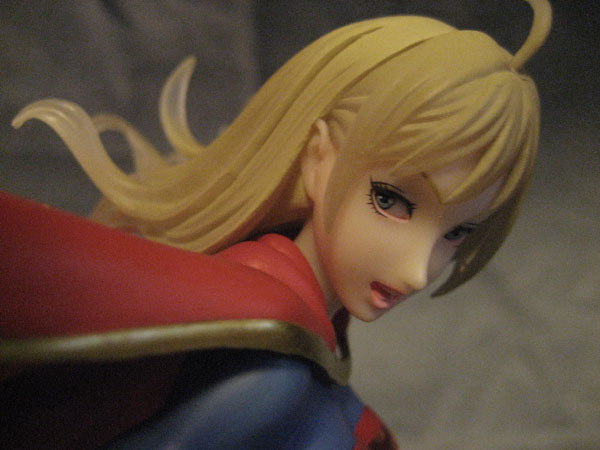 Despite effectively balancing on one leg, Supergirl is very sturdy and not at all top heavy– I do not feel any fear that she’s not going to stay in place, and the sculpting detail seen here is absolutely top notch, from the billow of Kara’s skirt and cape, to the studded details on her belt. Likewise, the paint apps on this piece are exemplary, with plenty of subtle shading on Kara’s blue outfit contrasting nicely with the metallic gold of her belt and trim and the deep red of her cape and boots. Like most other Bishoujo statues from Kotobukiya, Supergirl’s skin tone is quite fair, and cast in the same color plastic, with rosy highlights added to give a great sense of life to the overall figure.

It seems like each new installment in the Bishoujo series is a definite step up from the previous releases, and the level of detail in Kara’s outfit, and the wonderfully naturalistic sense of movement from this statue makes her a high point of the Collection thus far. The addition of Streaky is a nice touch, and the Super-Cat is handled very well, with a cape that compliments Kara’s perfectly and an excellent paint job with some light shading on her fur that really highlights the lightning bolt pattern on her side.

The sexy sensibility of Kotobukiya’s Bishoujo collection is a very unique and stylized depiction for the comic book heroines and villains featured in the series, and I think the East meets West aesthetic makes for a fantastic alternate take on these classic characters. Supergirl was released last year, but she is still available on Kotobukiya’s website… Click Here to orders your today!