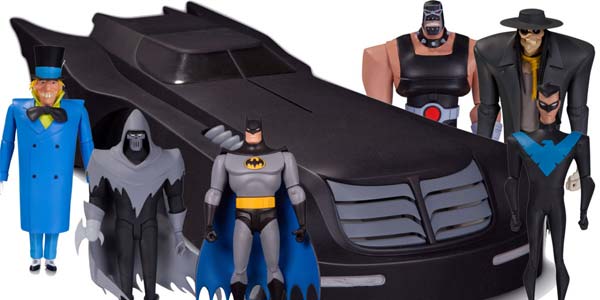 This is nicely shaping into the collection Bruce Timm-verse fans have been dreaming about.

DC Collectibles has effectively rekindled the flame of the action figure collector. One of their tentpole properties has been the wildly successful Batman: The Animated Series. On the heels of Roxy Rocket come the second vehicle of the line, the first-ever 2-pack, and assortment 5 consisting of 3 The New Batman Adventures outfits and one Classic Animated Rogue.

First up is a Classic-style Animated Batmobile. It is every bit as sleek and long as it is on the show, measuring lengthwise at 2 feet. Unlike Kenner’s prior efforts, this one has been faithfully created as a two-seater with all the interior detail you have come to expect from DC Collectibles. The headlights and break lights operate with the assistance of 2 AA batteries. We’ll hopefully find out be its release in October if Batman and his allies will include capes that allow them to sit properly.

Our first 2-pack is based in the emotionally-powerful (and considered by many to be the best) Batman movie: Mask of the Phantasm. This features the titular villain and a re-release of the wave 4 Classic Animated Batman with a new head.  Both feature all the points of articulation and should include the fun accessories that have become the line’s hallmark.  Eagle eyes will call attention to the heft of the Phantasm body, and that is understandable. The design plays into the mystique surrounding the identity of this new killer. I welcome that, just so long as we see payoff in a second “body-appropriate” Phantasm, perhaps with that Jet Pack Joker with his tooth knocked out, or a variant in his trenchcoat and hat.  I will need to re-watch, but my eyes are drawn to the small size of the hand sickle. If the Phantasm can get a “smoke” base to obscure the lower body, it will make a gorgeous display piece.  A Phantasm that appears unable to remove the hood and cape is a controversial approach, and I hope to get more word on this next week.

The final entry in the Classic animated style is the Mad Hatter. The design captures Jervis’s angular broad style while somehow giving the impression he can be posed dynamically. The opening at the bottom of the coat gives me hope for some interesting poses without being unable to move the trapped hips.  I think many collectors will understand and excuse the obvious limitations this design introduces. Much to my pleasure, he pulls his accessories from his introductory episode “Mad as a Hatter” including the Queen of Heart’s ax. Holding it double handed has yet to be determined, but I am hopeful. I don’t quite recall the control panel, but the extra hands and “10/6” card will be suitable additions. I do wonder of his hat will be removable. I would have loved to have seen the hidden Derringer (maybe the scissor-style extender clip) inside the hat from “The Worry Men” as an Easter egg. Keeping accessories episode-specific is stifling their accessory pool.

The New Batman Adventures figures were somewhat predictable. DC Collectibles had been doing one Batman or ally along with 2 villains, so the choices boiled down to which designs were favored or distinctive enough to be selected. Nightwing, Bane, and Scarecrow definitely make the cut. Nightwing is extremely slender here, and one wonders of he will be re-approached to account for the very thin joints. DC Collectibles has been vocal about small joints and their breakage issues. Articulation seems a tad inhibited at the diagonal cut of the elbows, making holding those binoculars at his eyes impossible at first glance. Besides his signature throwing star and alternate hands, a set of outstretched arms with glider wings (a la Man-Bat) hopefully can be incorporated for a more complete figure.

The new Scarecrow is an impressive and imposing design, and hopefully is a victim of a badly-painted prototype on his action figure. His jacket comes down pretty severely and boxes in his legs, and his face is fully-lit, versus the shadowed, toothy and pock-marked visage in the series. His accessories are par for the course in his “Never Fear” episode. He has several hands and his essential walking stick. The “no fear” gas canister is relevant, but a much more toyetic weapon should have been the pistol Scarecrow used to fire gas pellets at a disguised Bruce Wayne. A gas can over a gun is a head-scratcher.

Only Bane can outsize Scarecrow as the titan of the assortment. He looks fantastic in his updated duds. Special marks go to DC Collectibles for adding an ab crunch to the mold for when he German suplexes Batman on the show. The articulation is unique and appropriate for the close-quarters fighter, and my hats off for this gutsy move. Alternate grappling hands round out his included pieces. He wasn’t a gadget guy, and hands that allow my Bane to whip around Batman and his crew like ragdolls is all one can ask for.

I am dizzy from the avalanche of Batman Animated product coming down the pike from DC Collectibles. Knowing this, I really would prefer a “first pass, first kill” approach to the figure’s accessories when they get the aesthetic down pat. It’s nice to know that they can “fix” a figure at a later re-release with these missing pieces to refresh the product, but many of us have long-term prospects for this line. Hopefully DC Collectibles shares in our vision. I want figures from the Superman, Batman Beyond and Justice League Universe, and we can’t afford to hit our stride by the fourth identical Batman or Joker. DC Collectibles has made paying down debt that much harder. 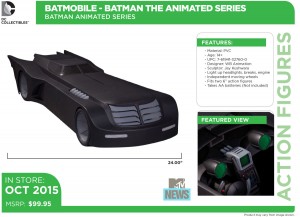 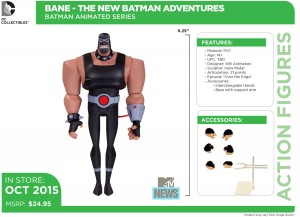 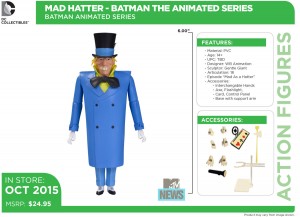 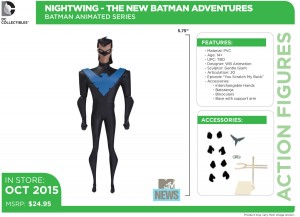 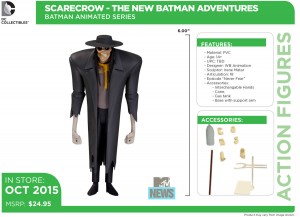 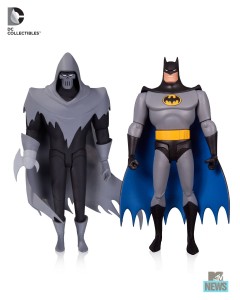