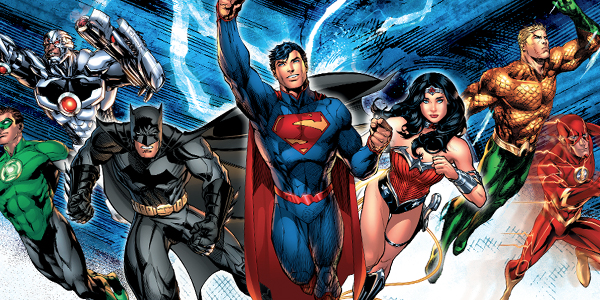 As the name suggests, Cryptozoic’s latest is a deck-building game steeped in the DC Universe, featuring tons of familiar characters and killer card art pulled straight from comic panels and covers.  It’s also the second game Cryptozoic has released that uses their “Cerberus Engine,” which allows for cross-title compatibility.  So how does it fare compared to other deck-builders out there?

Well first off, for those of you unfamiliar with this type of game, let’s do a quick run-down of the basic mechanics.  Right off the bat, each player is dealt one of seven superheroes – oversized cards featuring either Superman, Batman, Wonder Woman, Aquaman, Cyborg, Green Lantern, or Flash.  These will grant a unique special power that is constantly in effect. Players do not start with pre-constructed decks like they would in a collectible card game, but rather everyone starts with a simple deal of ten cards – seven “punch” cards and three “vulnerability” cards.  These are shuffled and placed face down as they make up your starting deck, from which you will draw five cards into your hand per turn.  The punch cards you start with grant +1 unit of power to the player for that turn.  Think of power as the game’s form of currency – it can be used to obtain super-powers and equipment or defeat super-villains.  Any cards acquired by this method, as well as your hand at the end of each turn, are immediately placed in your discard pile, which is eventually shuffled and recycled as the deck you continue to draw from. 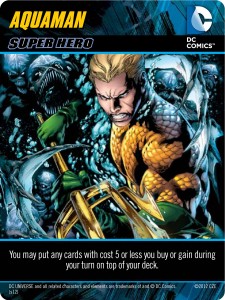 The “Line-Up” is where players are able to obtain new cards from.  This consists of five cards from the main deck laid out face-up along with a stack of “kick” cards and “super-villains,” each with a cost associated with it.  Kicks grant more power than the punches you start with and the experience gained by defeating super-villains usually nets you a decent power bonus as well.  Throughout the course of the game, as you obtain more and more powerful cards, there is a greater frequency that you will draw better cards into your hand each turn – especially since some cards give you the ability to destroy (discard from the game completely) unwanted cards.  Since “vulnerability” or “weakness” cards literally do nothing for you but take up space that could be occupied by helpful ones, you will want to eliminate them as quickly as possible.  The ultimate goal at the end of the game is to be the hero with the most victory points.  Each card features a small number inside of a star, which equals its victory point value. Typically, cards that cost more power obtain are worth more points, while weaker cards (like the “punches” you started with) may be worth as little as zero.

What makes things interesting are the villain cards, which attack other players, causing them to destroy 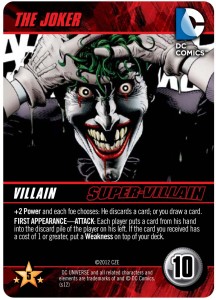 cards or draw “weaknesses” into their deck.  Each weakness card a player possesses at the end of the game counts as a -1 Victory Point.  Luckily, there are also cards that provide defense from attacks.  If you have one of these in your hand, you may discard it to avoid the effects of one attack.  In addition to villains surfacing in The Line-Up, you will also be able to purchase iconic items including the Power Ring, Batarangs, Aquaman’s trident, and the Lasso of Truth in addition to Super-Powers like heat vision and super-speed.  Each grant players different power bonuses or abilities in addition to their end-game point values.  Depending on your hero’s active power, these can aid you strategizing how to reinforce your deck.  For example, if you drew Batman as your character at the beginning of the game, who gives players +1 Power for each piece of equipment they play from their hand during their turn, you would do well to bulk up your deck with equipment cards to maximize the amount of power you can deal each turn.

Play continues until either the super-villain deck or the main deck is exhausted.  Depending on the number of players and their familiarity with the game, rounds can last from 30 minutes to an hour.  Truthfully though, the learning curve is incredibly shallow — a quick breeze through the instructions and you’ll have the hang of the mechanics after playing for a few minutes.  This is what I really dug about the DC Deck-Building Game: its simplicity.  A few similar titles, like the Resident Evil Deck Builder, look overly complex, involving far more set up time and a more robust rule set.  While there is certainly nothing wrong with that, one of the reasons I was drawn to this title was its streamlined feel.  There aren’t a ton of cards involved and the rules encourage fast-paced, fun game sessions.  The other reason I was excited about grabbing a copy was the use of the DC license itself, and while I’m extremely happy with the way the license was incorporated overall, there are a couple missed opportunities and odd design choices that are worth mentioning. 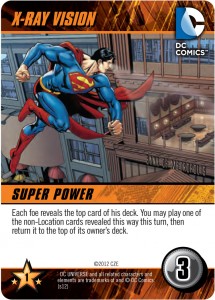 First, it would have been really nice to see cards that buffed some characters more than others.  What I mean is, there are equipment and super-power cards that represent items that are primarily used by specific heroes in the comics.  Batman uses the Batmobile, Green Lantern uses a Power Ring, and so on.  While I have no issue with Superman being able to wield the Lasso of Truth, it would have been nice if it gave Wonder Woman a larger bonus than anyone else for playing it.  This would have also added an element of other players trying to eliminate those cars from the line up before the hero who would benefit the most could obtain them.  The other thing that struck me as a little odd was the fact that, after you defeat villains and add them to your deck, you can continue to use their attacks against others.  It’s hard to say I’m complaining about it because, honestly, it made the game super-fun.  But the fact that Green Lantern could essentially recruit Harley Quinn or Starro, among others, and play them to attack others comes across as a bit strange.

But, this is a deck-building game after all, not an RPG, and I’m not looking for 100% comic book accuracy regarding the way cards interact.  What really puts the set over the top is the fantastic artwork.  The illustrations are perfect, the text is large and easy on the eyes, and the layout of each card immediately gives you the info you need to know.  It’s a bit of a shame they opted to use a few repeat cards in the main deck as opposed to a slightly more diverse deck, but all in all over 50 characters are represented here.  Fans of the DC Universe will have a blast with the game regardless, but the fast-paced, light nature of the game itself makes it quite accessible to those unfamiliar with the source material or deck-building games altogether.

The Cerberus Engine gives the game a simple, solid foundation and I can’t wait to see what Cryptozoic has in mind for future compatible releases (a Capcom game was recently confirmed and it will be awesome to see Mega Man face off with Cyborg).  The the amount of empty space inside the box is any indication, they also 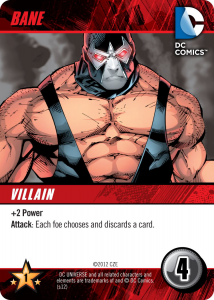 have plans on releasing some expansions packs.  Considering the amount of characters in the DC Universe, this game has barely scratched the surface — there are hundreds of awesome heroes and baddies Cryptozoic has at their disposal to incorporate here.  For the MSRP of $40.00, you get 114 “Main Deck” cards, 36 “Punch” cards, 16 “Vulnerability” cards, 20 “Weakness” cards, 16 “Kick” cards, 12 “Super-Villain” cards, 7 “Super-Hero” player cards, 1 rulebook, and a card storage tray (molded inside the box), so it’s a pretty decent sized set for the money.  If you’re somewhat new to deck building games, this is an excellent place to start — and if your a gaming veteran who’s play them all, there’s still a lot to like here if you’re in the mood for a quick-playing game that’s easy to learn and easy to teach others.