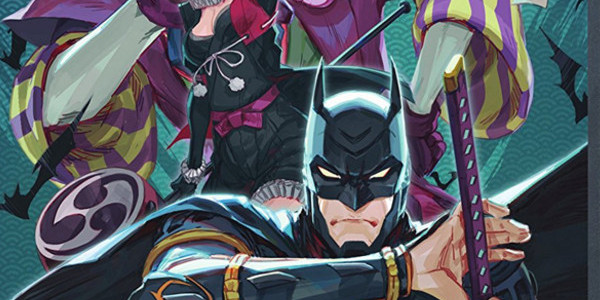 What happens when you take Batman out of his city and put him back in time with limited resources and five of Arkham’s fiercest criminals on the loose in feudal Japan? You get one of DC and Warner Brothers best-animated feature in a long time!!!

I have been watching these animated features for many years now and some have been lackluster of late. Batman Ninja changes that trend with beautiful art, beyond words animation, incredible writing, and a kickass ride. This movie plays like a classic American Western, which what I learned from watching the special features, that the classic Western films took cues from the Japanese lore. We also get video game nods with the beginning of each battle starting like a scene from Street Fighter or Tekken. There are also nods to Manga where we get still panels when someone important makes their debut.

While battling Gorilla Grodd, Batman is caught in Grodd’s Quake Engine time displacement machine and sent to Feudal Japan. There, he is chased by samurai wearing Joker masks. During his escape, Batman meets up with Catwoman, who had entered the timeline two years earlier. He learns from her that all of Gotham’s top criminals have moved to Feudal Japan and become feudal lords, battling each other until only one state remains. In order to stop the villains from changing history, Batman and Catwoman must get to the Quake Engine in Arkham Castle. Batman discovers that Alfred is also in the timeline and has built a Batcave.

Batman engages Joker in a very epic battle. Joker exploits Batman’s need for his gadgets and basically kicks his butt. Batman is saved by the Bat Clan of Hida who have been waiting for the prophecy of Batman to come save them. It is at this point where we see the rest of the Bat Family (Nightwing, Red Hood, Red Robin, and Robin) are with the Bat Clan. Without giving too much away, Batman must learn to not rely on his gadgets but seek the strength and wisdom of his comrades and himself to defeat all odds. The end battle will make Power Ranger, Afro Samurai, Naruto, Batman:TAS, and many other animated adventures extremely proud. Can the Caped Crusader defeat Lord Joker and stop him from messing up the timeline? You need to watch and find out!

The English voice dubs do an amazing job. Rodger Craig Smith is Batman, Tony Hale does a pretty good job as Joker, Will Friedle voices Red Robin, Tara Strong has double duty as both Harley and Poison Ivy, and Grey Griffin does a great job as Catwoman. Takashi Okazaki, the creator of Afro Samurai, is the character designer for the film. Fans of his work will NOT be disappointed. Fans of Batman should appreciate the costume designs and some of the unique Japanese nods to them.

The Special Features of the film include-

JQ gives this film a 10 out of 10! Yes, it was that amazing and I highly recommend picking this up.