SDCC 2015: DC Will Release An Animated Movie Based on The Killing Joke 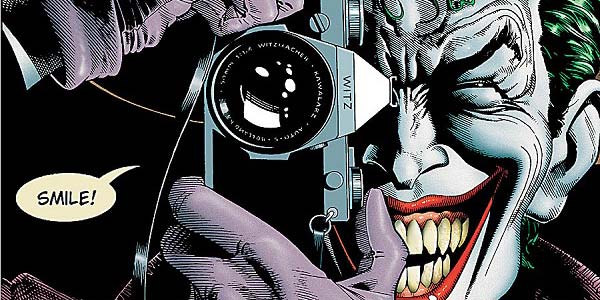 Alan Moore and Brian Bolland’s The Killing Joke is one of the most iconic and definitive Batman stories ever.  Like, an all-time classic, among the best character pieces you’re likely to find in modern literature, comic book or otherwise.  It’s earned its place as a piece of required material for all but the most casual of comic book readers.

So why does the fact that DC intends to release an animated movie based on this graphic novel seem kind of, I dunno, gross?

Maybe it’s the subject material (Killing Joke, of course, being the story in which The Joker rapes and paralyzes Batgirl, before maybe getting murdered by the Batman)… or an echo back to the bullshit that went down earlier this year over an abandoned Batgirl comic cover that referenced this story in a troubling fashion.

I tend to think it’s because the original story is what it is, and yes, it is very disturbing… but it broke new ground in being that way.  Retreading that same path in a new medium feels less shockingly revolutionary, and more like exploitation.  So maybe that’s why this just feels so… ew.

Anyway, it’s a thing, and that thing is happening, and Bruce Timm is at the helm.  Here’s some details on the 2016 movie, from the DC Blog:

The animated adaptation of Batman: The Killing Joke is executive produced by Bruce Timm and will retell this classic tale in an exciting new way. It’ll also feature an original 15-minute prologue that helps set up the story, giving even longtime fans of the story something new to look forward to.

What do you think– Is The Killing Joke: The Animated Movie a good idea or a bad idea?  Share your thoughts in the comments.