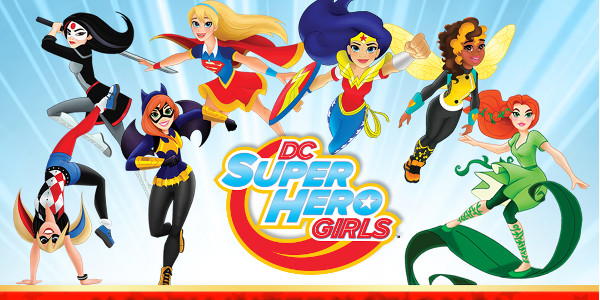 The DC Super Hero Girls get their own special on Boomerang!

Up until now, the only way to see the DC Super Hero Girls was the shorts on YouTube or their website, but that’s about to change. This Saturday, they get their own special entitled Super Hero High.

The special is focused on Supergirl enrolling in Super Hero High. Here, she’s only been Supergirl for about 4 weeks, so still extremely new to her powers. She’s welcomed with very open arms by Harley Quinn. Since she’s still so new with her powers, Supergirl fails just about every test. Pretty soon she being mentored by Barbara Gordon on how to be a super hero. While this is going on, someone is trying to break into the Boom Tube room, which could mean disaster for the entire school.

I’ve been a fan of the entire DC Super Hero Girls initiative since day one. I really enjoyed all the shorts and was really glad it was finally made into a longer special. While the cartoon mainly is geared towards girls, just about anyone would enjoy this cartoon. Yes, it’s very empowering towards young girls, but there’s enough in here for just about anyone, especially any type of DC Comics fan. It’s not that genre specific as a lot of people like to think.

There are so many positive messages in this cartoon. Always try your best. If it’s your best, don’t apologize. Keep yourself grounded but keep reaching for the stars. I’m seriously paraphrasing here, but those were pretty much the themes that kept going on through the episode. I’m a 46 yr old guy, and I could appreciate these.

The voice casting was excellent. Anais Fairweather voices Supergirl. I’m not familiar with Fairweather’s past work but she really pulls off a novice super hero extremely well. Mae Margaret Whitman does the voice of Barbara Gordon. Whitman is mainly known for TV shows like Parenthood, the movie The DUFF, and she currently voices April O’Neil in the Teenage Mutant Ninja Turtles cartoon.. And rounding out the cast is veteran voice actress Grey Griffin as Wonder Woman. And as a special bonus, Teen Titans Go’s Greg Cipes, reprises his role as Beast Boy. Of course, all the screen time that Beast Boy is in, he steals the scene.

If you’re a fan of the DC Super Hero Girls or a fan of DC Comics then you’re really going to love this cartoon. I really don’t care if you think that this is “too girly”. It’s not. But at the same time, don’t go in thinking the level of action is going to be on par with something like Young Justice. There’s a great balance of story and action here for an all ages audience.

Seriously hope that others like this cartoon, because I think it would make for a great weekly, half-hour cartoon. There is so much worse out there that is geared towards girls and DC Super Hero Girls is just far superior. It’s so nice to see Warner Bros and Mattel take the majority of the female heroes in the DC Universe and make them into this positive roles models.

Super Hero High premiers this Saturday, March 19th, at 10 AM EST, on Boomerang.