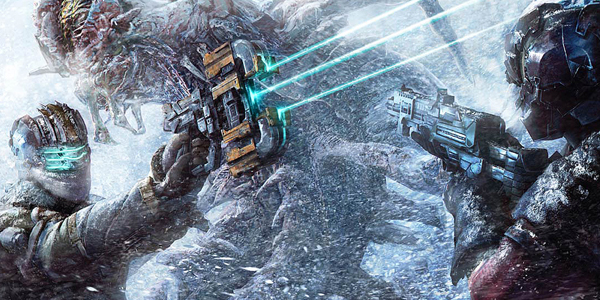 Dead Space returns with a third entry but, much like the reanimated, mutated corpses that have been horrifying players since the series’ inception in 2008, the franchise has suffered an unfortunate transformation.  Lacking the subtlety and cohesive narrative that made the original something truly special, Dead Space 3 bears little semblance to the smart survival-horror epic that it once was.

It’s a problem that often plagues sequels and one that destroyed the Mass Effect franchise, which was also published by Electronic Arts, in the eyes of many fans.  Publishers are obviously looking to make a profit on their sizable investment and, to that effect, will want to ensure the game they are backing will appeal to as many gamers as possible. Unfortunately, the easiest way to make anything appeal to the masses is to dumb it down, taking emphasis away from quality storytelling in favor of delivering fast-paced action-packed set pieces.  Nearly everything that made the series a hit with niche gamers has been stripped away and replaced with mechanics designed to make for a more accessible, streamlined experience.  The first Dead Space title was a dark, disturbing work of tense sci-fi horror.  It was a hallucinatory trip that almost made you uncomfortable to play it, even while you couldn’t possibly pry yourself away; playing out as if David Lynch had re-imagined 1982’s The Thing.  What you’ll find in Dead Space 3 is more akin to that film if Michael Bay was behind the helm. 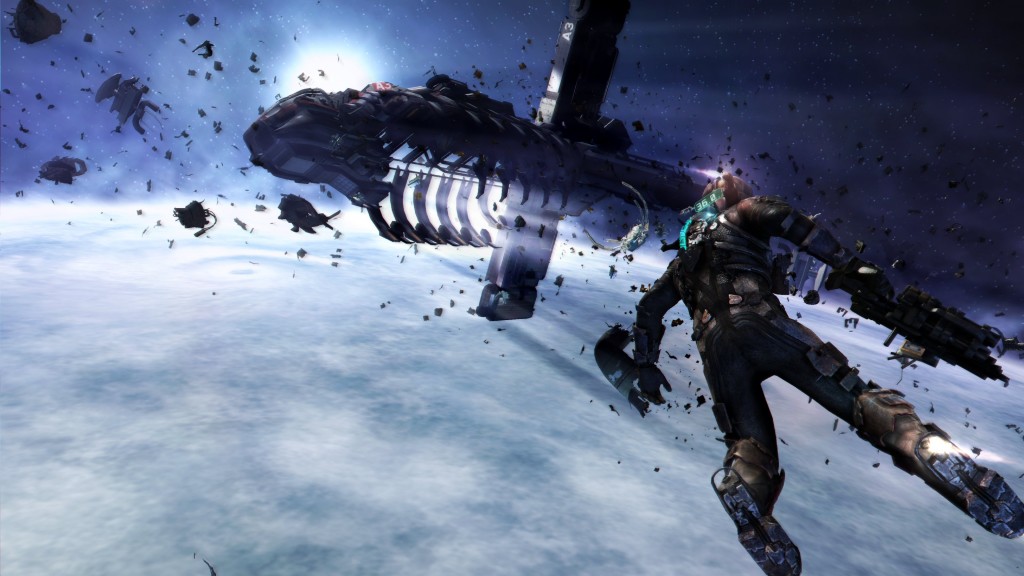 That said, it’s an extremely entertaining game in its own right – just don’t venture in expecting a slow, moody thriller.  The story picks up some time after the events of Dead Space 2, where protagonist Isaac Clark is in a better state of mental health but barely able to scrape rent together.  After he successfully destroyed a Marker, one of several alien artifacts which emit a powerful energy capable of inducing psychosis in the living and radically morphing necrotic cells into terrifying abominations, Isaac has fallen on hard times, haunted by the memories of what had happened.  Now, the Unitologists, religious zealots who believe the Markers hold the key to the destruction and ultimate salvation of the universe, are bent on killing him to prevent any further interference.  The setup is simple, but the story quickly devolves into a convoluted mess. As Isaac and a small crew set off in search of the original marker, housed on a frozen wasteland of a planet surrounded by scores of ancient derelict vessels, whose inhabitants likely tried to destroy the Marker long ago.  At every turn though, your progress is halted as you are sent on numerous collection missions, pulled into disjointed side-stories, and run into one dead end after another.  Because of this, you’ll find yourself doing a fair share of back-tracking and a large part of the narrative feeling like you’re still at square one. 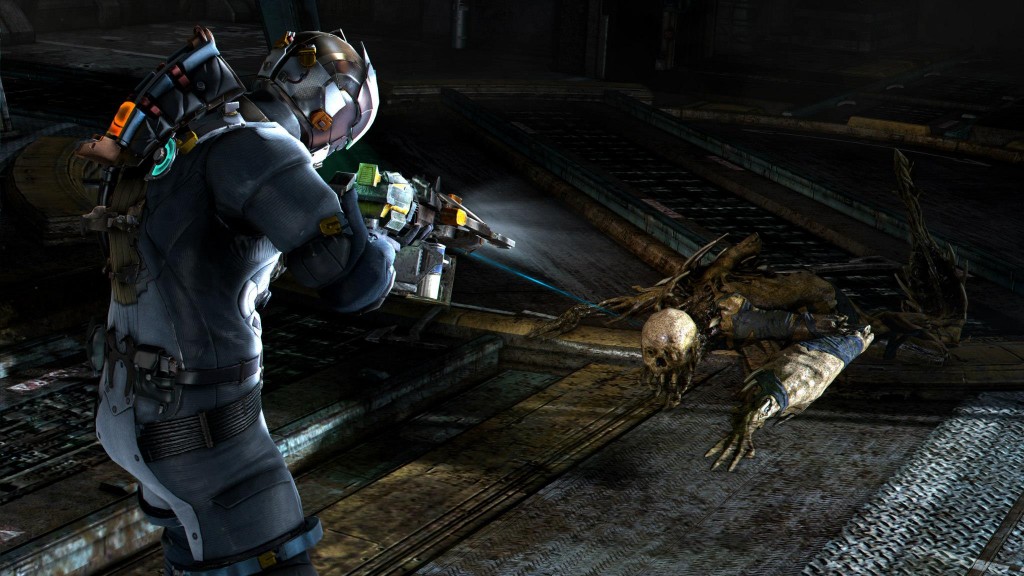 Thankfully, you’ll likely be too busy shooting and stomping everything in sight to notice such things.  Isaac is much less an engineer here and more like a space-Rambo.  Gone are the days of outfitting basic construction tools as weaponry and conserving what little ammunition you could find.  Now, you can construct a veritable arsenal of high-tech weaponry and upgrade them to your hearts content.  Want a flamethrower with an underslung shotgun attachment?  You can construct it given the right resources.  You can even upgrade the things like the reload speed and damage output by installing certain circuits.  Don’t have the resources? You can buy them via in-game microtransactions.  Now, a lot of hate has been thrown at EA over this one, and rightfully so.  Granted, unlocking additional content through small in-game purchases is slowly creeping into all segments of gaming, but it doesn’t make it any less a slap in the face, nor does it tarnish this game any less.  For a game that used to be all about desperately surviving against unimaginable horrors, it’s awful to see implementations that allow players to buy their way out of trouble.  What’s worse, I used it.  I played right into their greedy hands when, after getting stuck in a particularly difficult part of the game, I doubled back to a work bench, purchased a pack of upgraded guns and returned to dish out some serious hurt (Note: “Impossible” difficulty is rather challenging).  While it could still be considered thematically acceptable that there are workstations in the game that could accept “credits” in exchange for raw materials, it really destroys the sense of overwhelming dread that the game used to succeed so thoroughly in creating. 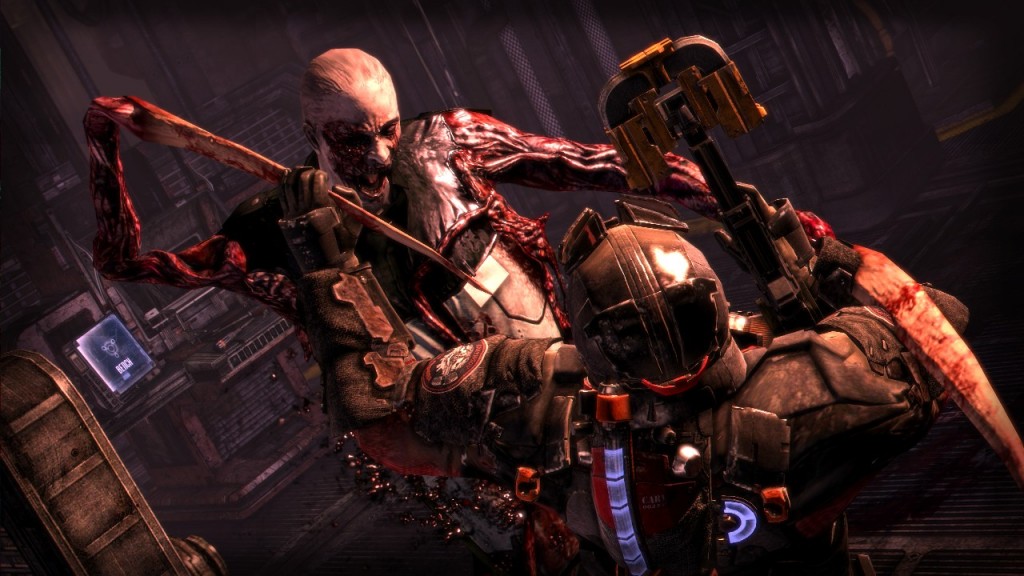 Even the ships that you will spend a good part of the adventure exploring seem lifeless in comparison to the Ishimura and the Sprawl in Dead Space 1 & 2 respectively.  The USS Ishimura was such a well-implemented backdrop for the first game that it really became a character itself.  It’s return in the second game came as a sudden shock to players as, upon stepping foot onto the vessel, you could feel all the horrific memories come back to you.  And just as you think, “I hope I don’t have to go back to the Med-Bay,” you find out that’s exactly where you need to go – almost as if the game reveled in scaring the hell out of you and stressing you out beyond belief.  Dead Space 3 is devoid of these memorable locations. Sure, the tight, clanking corridors of the ships you explore look great and still provide plenty of shocks as creatures tear through ventilation ducts and descend from ceilings, but the environments simply don’t pack the punch they used to.  If anything, the saving grace is the audio, which is absolutely mind-blowing through a good surround setup or decent headphones.  Enemies will shriek and gurgle the most otherworldly noises and will always sound like they’re right on top of you – usually because they are. 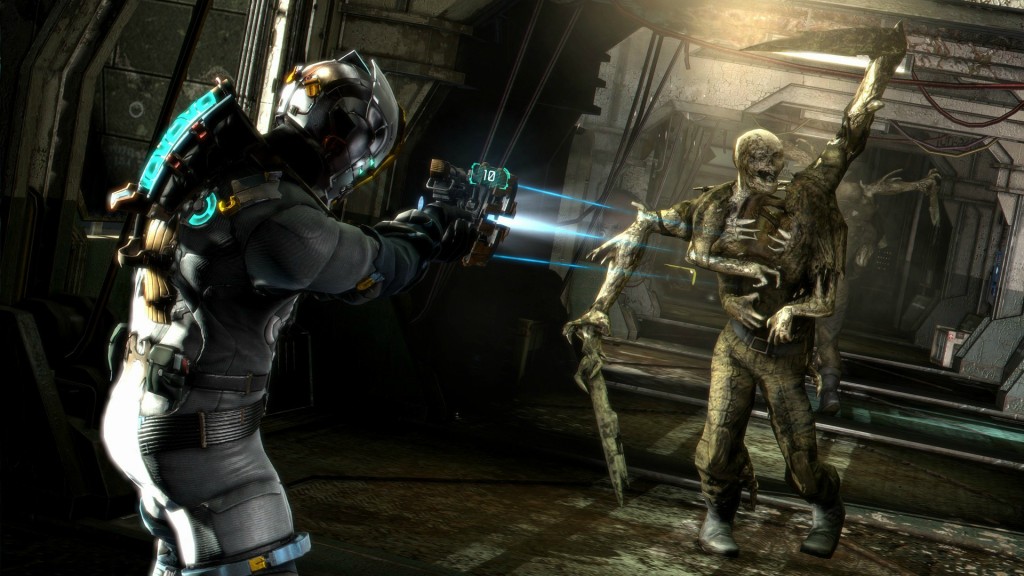 The other thing the game absolutely has going for it is its visuals.  Similar to the previous game, Dead Space 3’s villains are scary mostly because of the way they look and move.  The detail that went into creating these monstrosities is second to none, so much so that you can find yourself believing these things could exist.  Even the way they react to being shot is amazing.  Using a line gun, you can shoot a horizontal beam of energy at one of the “Creeper” enemy types to sever its legs or maybe blow its upper torso off.  This will usually result in the severed portion sprouting huge, spiny tentacles and furiously coming at you with even more tenacity than before.  Try running away and they will literally chase you through the ceilings and air vents to pop back in on you no matter where you go.  There tenacity manages to keep the tension high, even when the atmosphere fails to be as frightening as in previous entries.

As much as I was against the inclusion of a new co-operative mode, Dead Space 3 actually executed that surprisingly well — perhaps too well.  Infuriatingly, there are several exclusive missions, dialogue options, and additional scenes that flesh out the narrative that you will only see while while playing with or as Sergeant John Carver.  Sorry folks with no friends or an online connection, but you’ll never see everything the game has to offer.  Aside from that, it feels like some of the tougher difficulty spikes are almost custom-tailored to be played with a co-op partner watching your back as your are flanked by fast-moving enemies in all directions.  There are even some rig upgrades that let players share their health and stasis packs with one another.  Ammo is less of a concern however, as all weapons, regardless of whether they project grenades, energy beams, saw blades, or bullets, all consume the same ammo packs for some reason.  It’s very interesting to play the game from Carver’s perspective as his mind slowly begins to degenerate from the Marker’s influence, but it does further dilute the experience.  After all, if the game failed to live up to the terrifying standards set by the previous titles before, it is most definitely a tamer experience to play through with a friend. 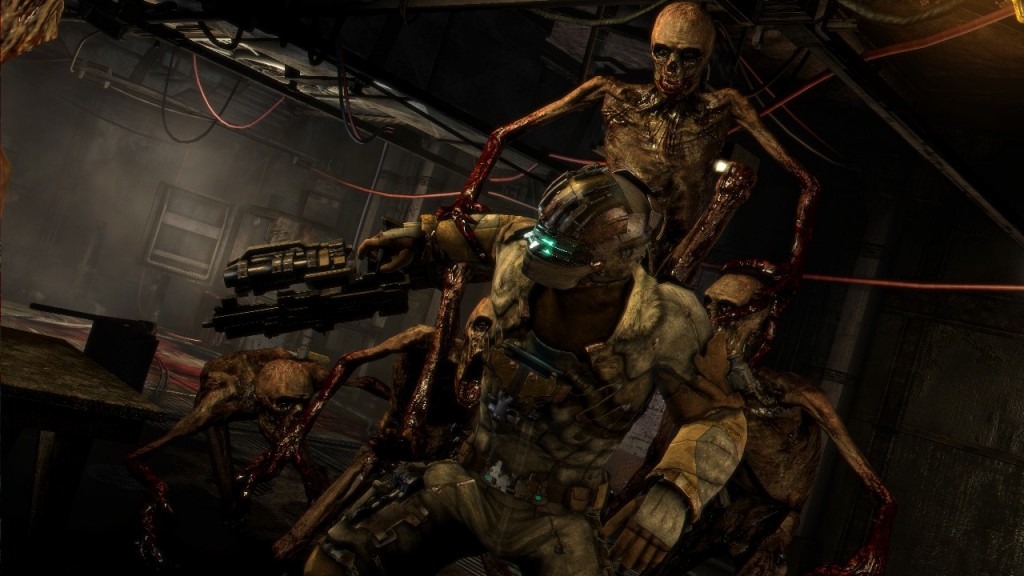 Really, your enjoyment of the game will ultimately lie with how well you can cope with developer Visceral Games’ new vision for the franchise.  If I hadn’t played the first two titles, I may well have enjoyed Dead Space 3 much more.  But as it is, even will all the negativity I’ve been throwing around, the game is incredibly exciting and will take players on one hell of a ride.  Scary or not, the game comparatively barrels forward at a breakneck pace, filled with one frenetic firefight after another.  So while it fails to live up to the gripping horror of the earlier titles that long-time fans love, it succeeds across the board as a well-crafted action shooter.  For what it is, it’s put together extremely well and you can tell that the development team dedicated countless hours to bring out the level of polish present throughout, it’s just disconcerting to see the franchise jettison some of the charm that brought it success in the first place to elevate its sales projections with a broader audience.