DEADPOOL – About The Production – Part 3 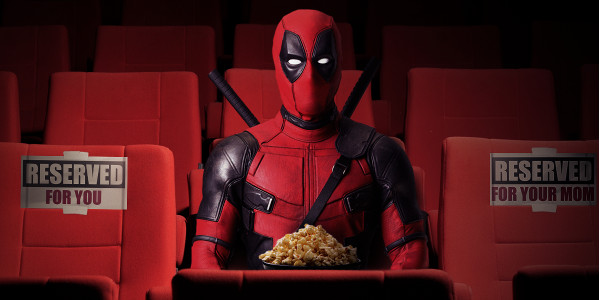 THE FAULT IN OUR SCARS

A famous poet wrote that, “…the most massive characters are seared with scars” – which would certainly apply to Deadpool, whose mutilated visage was the result of the horrific experiments he underwent at The Workshop.   Equally applicable is this comment from his buddy Weasel:  “You look like Freddy Krueger face-f***** a topographical map of Utah.”

On set, Reynolds wore the iconic red suit as a badge of honor, and inhabited Deadpool’s scars with the same sense of kinship and admiration.  When Reynolds as Deadpool removes his mask for the first time to reveal his disfigured face, you can’t help but feel empathy.  It’s a moment that really humanizes the character, because as vile and violent as Deadpool can be sometimes, he presents here an unmasked vulnerability.

“Ryan and I had a lot of fun with the scene when Weasel sees the scarred version of Wade for first time,” T.J. Miller recalls.  “It’s pretty horrifying to look at.  It was difficult for me to talk to Ryan when he was in makeup.  He’d come over and say, like, “T.J., I’m lonely, you know?  I need a friend on set.”  And I would say, “Get away from me.  Your face looks like a roadmap to hell.”

Makeup Department Head Bill Corso worked with the Creative Character Engineering department to create that scarred look.  “We did multiple full-makeup tests and designs, trying to come up with not just a guy who’s disfigured, but a cool, iconic character,” Corso explains.  “I knew that, with Ryan, Deadpool would also possess a certain charm and ruggedness.  We took his features and strengthened and played with them, to slightly skew everything, so it’s still Ryan but an enhanced, mutated version of him.”

In the end, Corso created a series of thin silicone prosthetics with a translucent quality, revealing muscles, blood and tissue beneath the skin.  “Ryan had ten paper-thin silicon appliances on his head,” Corso explains.   “Now multiply that by a whole body for the compelling fight sequence with Ed Skrein as Ajax at the Workshop, when Ryan is basically au naturel.  It’s a raw, brutal fight, and there’s no clothing or padding.  It gets very real!”

Along with Deadpool fighting in the buff, the film’s torrid scenes between Wade and Vanessa, and Deadpool’s non-stop and off-color verbal stylings, all contribute to the film’s R-rating.  “I think the R-rating allows us to have a level of reality that wouldn’t be possible with a PG-13,” says Miller.  “I also think it’s an important step in the expansion of the genre.  There’s a type of film that can only be made with this rating, and that really expands the boundaries of the stories comic book movies can tell.”

As the filmmakers ready DEADPOOL for a February 2016 opening, they remain convinced the time is right for this unique movie event.  “When comic book movies first appeared, they had to be ‘tentpole’ movies, which had to appeal to the broadest possible audience,” Miller says.  “DEADPOOL was always meant to be an edgy film, and the time is right for it.   The genre of superhero and comic book films is wider and it feels like it’s time to do a film like this, that sort of pushes the boundaries a little further.”

The director of photography is Ken Seng (“Project X”), the production designer is Sean Haworth (“Goosebumps”), the editor is Julian Clarke, ACE (“District 9”), and music is by Tom Holkenborg (“Mad Max: Fury Road”).