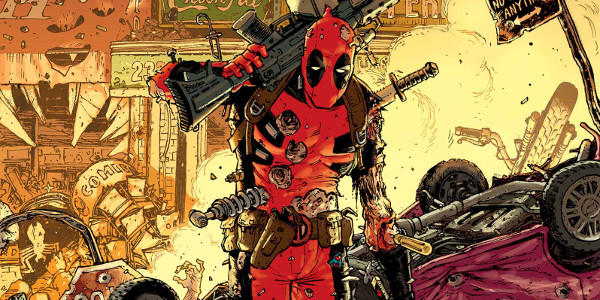 FOX’s “Deadpool” is changing the film advertising campaigns with a series of clever ads that promote their new movie.

A more recent poster released features Deadpool wearing a Ring-Pop playing with the previous role that Reynolds starred in as the Green Lantern. Deadpool has made a habit of spouting off whatever he’s thinking without a care in the world, and that’s what makes him promotional gold for FOX’s upcoming film.

In one video he gets right to the point in a video asking male viewers to “check their smooth criminals” for Testicular Cancer and talk to a doctor about any concerns so they can kick testicular cancer in the balls!

Hey, but Deadpool isn’t just about the guys he’s got something for his lady fans too. In the video he tells women that if they catch their man feeling around their walnuts then its probably his fault, and that women have some fumbling to do themselves to check for breast cancer because one in eight women will be diagnosed with breast cancer at some point in their lives.

Australia Day was just this past week, and Deadpool was excited to share his thoughts on the Holiday. He raves about the Australians giving us Wolverine, refering to Hugh Jackman and Ryan Reynolds previous attempt at Deadpool in X-Men Origins. As ridiculous as the videos are its no joke because Deadpool does hit theater Febuary 11th!!!

And check out our look at the film throughout the week!!