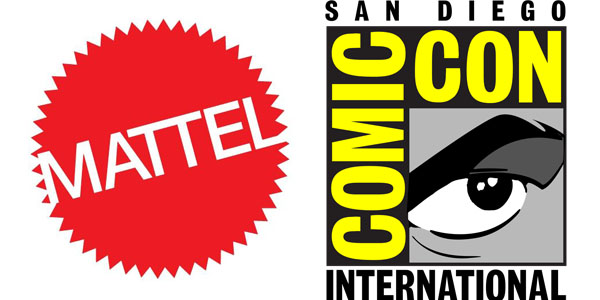 San Diego Comic Con is less than two months away, and many of us are working out our budgets for all the latest and greatest collectibles.

Mattel has previously teased us with Monster High. Joining Ghostbusting Frankie Stein, Robecca Steam and her inventive father is a bevy of all new dolls ready to drain your wallets dry, as well as another Ghostbusters exclusive. Lastly, Thomas & Friends and DC comics will provide a mashup of their own!

Another Barbie doll based on Gal Gadot’s Wonder Woman comes in an all new outfit with extremely feminized costuming, long doll hair, and cloak. $80 will net you this beauty. While the embellishments are overdone for the character, the metallic armor and weaponry is a marvel in execution.

Another female warrior has entered the fray. For the Honor of Grayskull, She-Ra returns in action doll fighting form, but not as you remember her 30 years ago. This time, she is an 11-inch doll complete with three different outfits and double-jointed articulation. You can dress her up as Princess Adora, the all-too-familiar cartoon outfit, and her vintage action figure outfit. She will also include unique plated armor and weaponry for all three looks, as well as a display stand. If this $75 masterpiece does well, can we expect more princesses of power?

Ever After High has always had an impressive release for San Diego Comic Con, and this year is no exception. Cedar Wood will follow in the footsteps of her father Pinocchio, and her attractive packaging accentuates her transition into the marionette, performing against her wishes on the stage. She hits all the visual cues, from donkey ears, to the longer nose and puppet strings. One look and it’s clear why she is a Rebel. For $30, you can take her home and rescue her from her cruel fate.

In addition to the after mentioned dolls there is a Ghostbusters light and sound multi pack for $24.99. More for display rather than opening in playing, buttons on the outside of the box activate lights and sounds including the proton packs and the Ghostbusters theme! Many of the pieces in the set can already be found in retail, but the attractive packaging and light and sound features make for an easy sell.

Lastly of course, where there is Mattel, there are toy cars. Thomas & Friends has a mash-up with Batman vs Superman to create an all new comic style adventure with the trainsets Thomas and Diesel donning the disguises of Superman and Batman in adorable comic book packaging. You could take this set home for $19.99. Speaking of adorable, Mattel will be bringing a Disney Pixar Cars Precision Series Die-Cast Dirt Track Fabulous Hudson Hornet Vehicle for $25. This is Doc Hudson in his prime as the Fabulous Hudson Hornet, a first time release for the veteran roadster.

I guess it’s true what they say that good things come to those who wait. In order to see my amazing action figures coming for Masters of the Universe and Thundercats, it’s only fitting that we weed through all the dolls and cars that Mattel would be presenting us first. That’s hardly a bad thing. While these are expensive, this is one of Mattel’s stronger years. They are only scratching the surface with more debuts throughout the coming days!