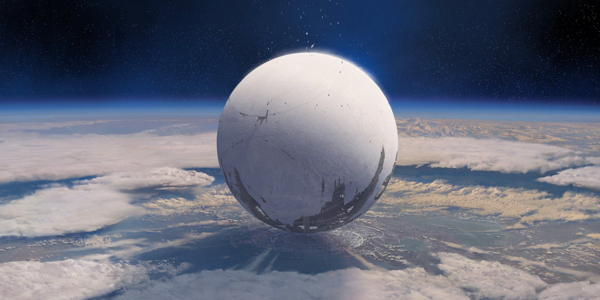 Bungie, the studio most famous for creating the Halo franchise, returns to the spotlight with their latest venture, Destiny, an always-online first-person shooter which is simultaneously uninspired and fascinating — frustratingly lacking in so many key areas yet overwhelmingly enjoyable and addicting.  It is likely to be the best bad game you’ve ever played.

It’s difficult to deliver a definitive review of Destiny due to the constantly evolving nature of the game and the new challenges that players are tasked with on a daily basis.  What I can share are the experiences I’ve had with the title thus far and my impressions of its technical and narrative aspects.  The first time you boot up Destiny, you’re greeted with a surprisingly clean, elegant, minimalist menu system and character customization suite.  Here, players can choose their Guardian’s gender and one of three races.  While these options only offer some aesthetic differences, the character class you choose will alter gameplay significantly as each is tied to their own unique set of skill trees and wields their own powerful abilities. 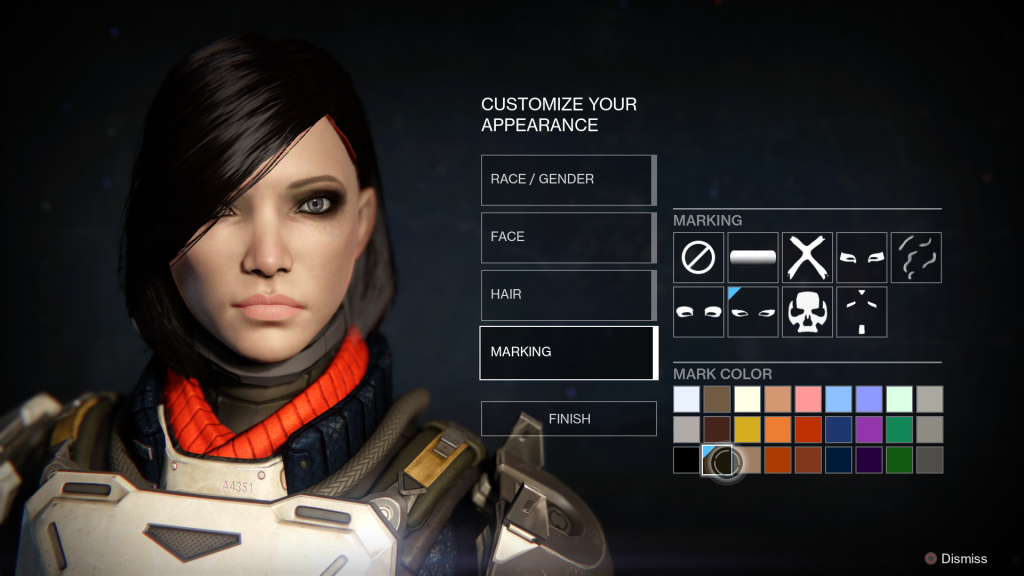 Once your character is designed to your satisfaction (and the creation tools are truly great, with a robust set of features and characteristics to make your character “yours”) you are introduced bit-by-bit to the world Bungie has created for the game.  Set far in the future, humankind has colonized the outer limits of our Solar System with the help of great technological advancements brought by the Traveler, a mysterious orb that appeared on Earth centuries earlier.  When an enigmatic power called the Darkness suddenly descended on our civilizations, however, a galactic war took place and much of humanity fell.  At the onset of the game, a small hovering robotic AI called a Ghost finds you and brings you back from the brink of death in order to join the Guardians, an order of powerful warriors, in exploring the remnants of fallen outposts, repelling the Darkness, and reclaiming what is left of our society.  It’s actually a decent sci-fi setup but the narrative never really pans out or offers any sense of closure or true progression.  Instead, this is used as a backdrop to loosely explain why you and your Ghost companion must travel across the galaxy, scanning items and shooting aliens in a repetitive, trope-laden fashion. 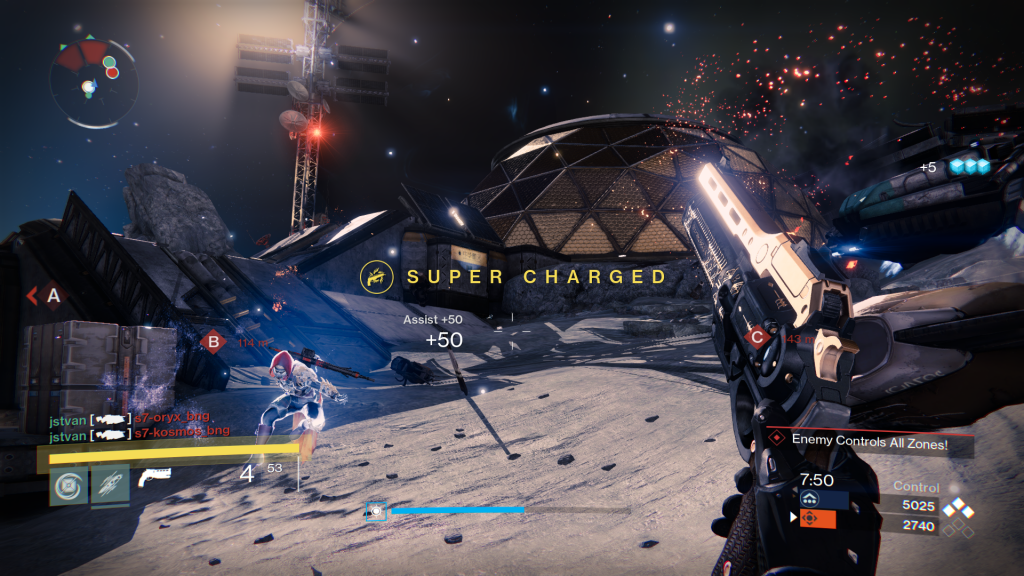 If it weren’t for the gorgeous visuals, incredible score, and top-notch sound design, the first few hours of the game may have proven too dull to soldier through but, to be clear, Destiny looks and sounds amazing.  Even while lacking a traditional storytelling element, the art direction of each location in the game succeeds so well in evoking a real feeling of the despair and emptiness that would accompany a war-torn civilization.  Ambient sound and subtle audio cues are used to great effect as well, transitioning from utter silence to eerie string arrangements to up-tempo electro tunes to booming, raucous orchestrated selections to accompany the on-screen action perfectly.  Even the firearm clicks, distinct melee impacts, and the signature high-frequency hum of your speeder bike sound brilliant.  It’s a shame that the same level of skill and meticulousness wasn’t applied to writing the script or, perhaps more so, to the voice acting.  Peter Dinklage specifically, who was brought on to voice your robotic Ghost companion, delivers a wholly dull and lifeless performance.  As the game is nearly devoid of dialogue aside from your Ghost’s constant instruction on how and where to proceed next, you’d think the developer would have gone to great lengths to ensure a memorable experience.  Unfortunately, the phoned-in delivery and painfully silly script will leave players shaking their heads, especially when you consider that Cortana, a similar AI companion from the Halo series, benefitted from some pretty great writing and solid vocal work in each game. 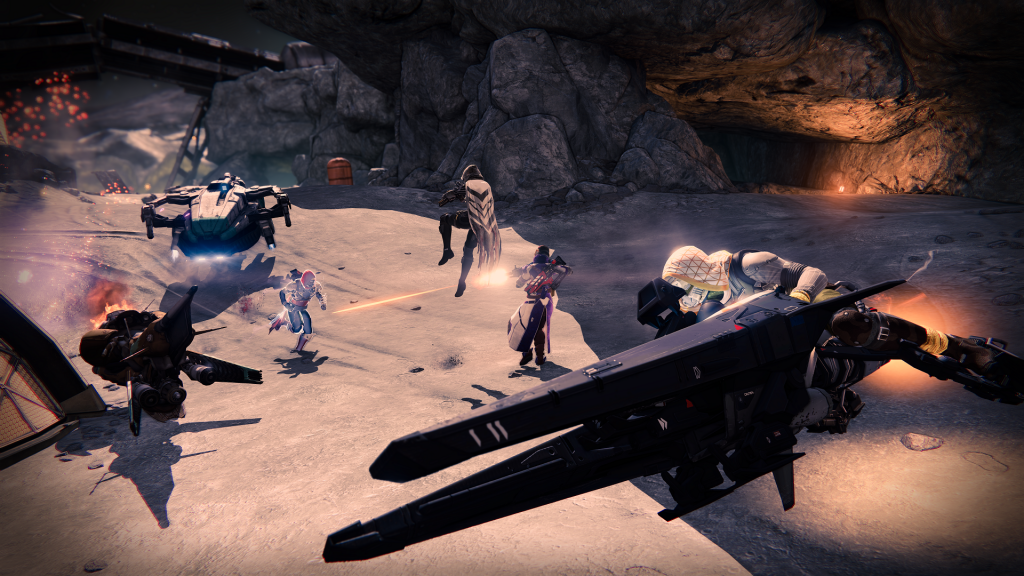 Regardless, the important thing is that you need save the universe from some kind of evil…for some reason…and you apparently do this by accompanying your ghost to the farthest reaches of the galaxy and fighting off hundreds of aggressive aliens while it scans things.  This is largely all that happens in Destiny’s campaign – the locales and enemies change up, but every level boils down to fighting off tons of baddies while your Ghost takes it’s time scanning/decoding/deciphering something of interest.  As mind-numbingly repetitive and mundane as it may seem, it does serve as an excellent setup to face off against arena-style battles of attrition against wave after wave of various enemies.  Of course there are “patrol” missions on each planet that offer some diversity in the form of quick bite-sized missions as well, but the overarching, driving force behind everything remains the same – grind for experience and gear, cope with wasting hours on end to come up mostly empty-handed, and then go back to grinding some more.  Thanks to Destiny’s interesting/frustrating character levelling system, the game frequently becomes a futile exercise to farm for rare loot drops and gather “marks” to spend on better equipment.  Unfortunately, random loot drops are so sporadic and the experience you accrue drips in at such slow increments that players will find themselves coaxed into dedicating crazy amounts of time with little to show for their efforts.  I certainly don’t want that to sound like a completely negative thing – after all, the developers have created an addictive system that encourages people to play their game more and the fact that levelling up can be difficult means that, when you do make progress, you feel a greater sense of celebratory accomplishment.  You’ll just find yourself wishing the campaign portion of the game could have been a bit more diverse in its presentation while you do it. 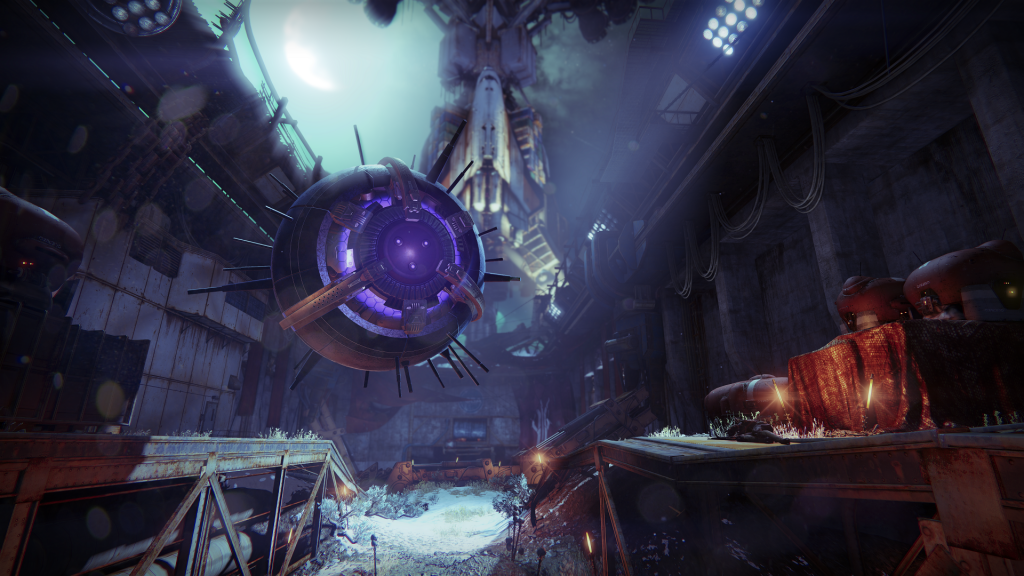 Oddly enough though, the more time you spend with Destiny, the more you begin to appreciate it.  Just as you ready yourself to try the same cooperative Strike mission for the umpteenth time, a public event occurs or a huge war breaks out, flooding the screen with aliens as if they invade your location full-force.  Just as you start to become frustrated that you haven’t seen a useful piece of loot drop in what seems like forever, the game awards you with an amazing piece of gear.  It’s this kind of randomness that makes the game special, keeps you on your toes, and keeps you endlessly coming back for more.  As opposed to a game like Diablo that dispenses lot at an alarming rate, so much so that is can become a chore to keep up with it, Destiny doles out a paltry amount of items, making it pretty exhilarating when you land a good one.

By far though, the greatest aspect of Destiny is the multiplayer experience.  Forming a fireteam with two friends, pumping up the difficulty on a Strike mission, and heading in, guns blazing is a total blast.  Six-player friendly, near-impossible “Raid” missions have also become available for Guardians that have been levelled up adequately and are looking for the ultimate challenge.  Raids actually represent the most incredible aspect of the game, requiring practice, constant communication, and a group that can function like a well-oiled machine — Raids leave no room for error or slopiness.  Even more interesting is that the introductory Raid throws some pretty obscure challenges at players that are completely new, without any warning or hints on how to proceed, requiring a good deal of trial & error gameplay and discussion with your team. 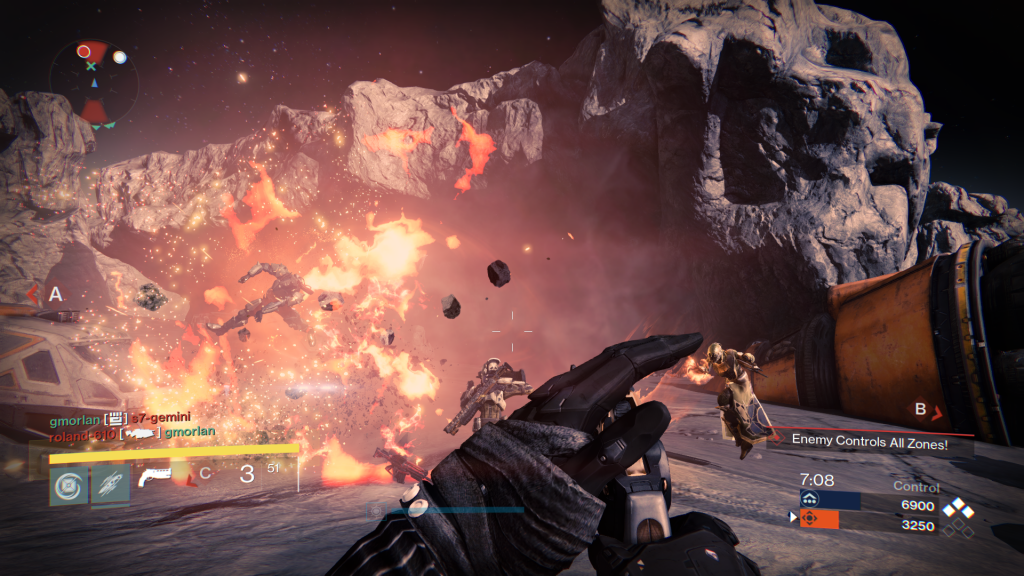 Crucible is name of the competitive multiplayer suite which contains a control/domination style mode, a free-for-all deathmatch, and both large and small team deathmatch modes.  Bungie has a good amount of experience at producing fantastic PvP maps and it shows in Destiny.  Even while lacking the slew of customization options and modifiers present in the Halo series, the bare-bones presentation here is incredibly fun and playable and the streamlined approach ensures a fast-paced play experience.  While players’ level bonuses are somewhat equalized for competitive play, they still benefit from the gear they bring in with them, giving veteran players a distinct advantage while giving newcomers an incentive to put in lots of time to farm great gear for themselves.  Again, it’s a bit of a cruel, unforgiving system but, ultimately, one that gets players hooked.

The arsenal present in Destiny is a bit sparse, offering only a few different options to fill your primary/secondary/heavy slots (although, to be fair, there are many variations of the few gun classes present), along with class-specific grenades but, like every other aspect of the title, it makes up for the lack of diversity with well-tested, near-perfect gameplay.  Each weapon has its own nuances and has a real feeling of weight about them.  They handle like they should and each upgrade they’re levelled with actually has a discernable difference.  Really, Destiny can only get better from here – Bungie is adding new timed challenges and content constantly and there are two expansions already announced for December and March which will, no doubt, add a variety of new modes and locations to explore.  If they can keep up the momentum of maintaining a slow, steady flow of fresh challenges, Destiny could benefit from an extremely long lifespan – even if most of the time devoted to it is a hellish, unrewarding, torturous chore.