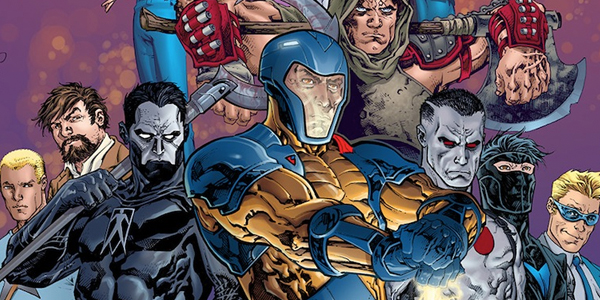 The Valiant Universe RPG, published by Catalyst Game Labs and set for release on July 5th, is a role-playing experience set in the Valiant comic book universe with pre-constructed scenarios based on established story arcs.  Leading up to its launch, Catalyst has announced its Digital Initiative – a digital-first rollout featuring quick-start rules and select characters and settings from the upcoming title.

Currently available for free download are the introductory quick-start rules for the Unity scenarios, allowing prospective players to get their feet wet with the universe and get acquainted with the rule set.  On May 17th, the supplemental Harbinger Wars (Bloodshot) rules will be released for even more action-packed sessions.  A month later on June 21st, which is free RPG Day, when the Harbinger Wars (Renegades)quick-start rules will be available in print for free at participating gaming shops nationwide.  This staggered release allows players to ease in at a steady pace while offering a healthy amount of content.  All three of these scenarios are pulled straight from Valiant’s award-winning books and feature the relevant character to each arc.  In the introductory Unity quick-start rules for example, the super-team of Ninjak, the Eternal Warrior, and Livewire, led by Toyo Harada, infiltrate an alien fortress defended by Aric of Dacia and his X-O class armor.  Fans will now get to insert themselves into the explosive situation and ultimately mold the events into a story all their own.

The system used for The Valiant Universe RPG runs on a fairly simple, straightforward set of rules and keeps each encounter very story-oriented, which makes sense considering the rich source material that make up the scenarios.  The mechanics are fairly unique in that the system does not call for a single GM to run the game (although this is still an optional way to play).  Instead, the role of the GM, or “lead narrator” as it’s referred to here, is assumed in turn by all the players.  This gives each participant a chance to play both the role of the story’s antagonist as well as their chosen hero.  Traditionally, RPGs focus on long-term campaigns in which adventurers encounter hordes of enemies and traps, with each session typically ending with one giant boss battle.  While this formula can be great fun, it rarely fits the superhero theme, which may be why previous attempts at comic book-themed role playing systems have fallen flat.  Thankfully, it seems that the creative team has a handle on how to immerse players into the Valiant Universe and the over-the-top battles present in their pages in a way that’s both fun for newcomers and will please fans of the books.

According to Russell A. Brown, co-writer and President of Consumer Products/Promotions/Ad Sales for Valiant Entertainment, “Already, fans all over the world are clamoring to see what Catalyst has up its sleeve for the Valiant Universe RPG. These Quick Start previews are a perfect introduction to the nuanced and high-stakes world of Valiant’s indomitable heroes. Whether you’re a longtime fan of Valiant’s characters, or meeting them for the very first time, get ready for a new experience in gameplay unlike anything else out there today.”  It’s pretty great to see an honest attempt to make a great licensed tabletop game of this kind, rather than just slapping a theme on an existing system.  The GM-switching sounds like a lot of fun as it always gives a new person the opportunity to drive the story forward and react to the protagonists in their own way.  There are also “luck” mechanics that can grant automatic success on die rolls and earnable “plot points” that can be cashed in for particularly game-changing feats.  The teaser artwork at PAX East piqued my interest and now seeing where the project is headed has me excited to see what they roll out with next.  Look for print pre-orders and PDF copies of the complete Valiant Universe RPG to debut on July 5th, with the book to follow in August.

Full details on the upcoming quick-start rules supplementals as well as downloads of released rule sets can be found at www.catalygamelabs.com/valiant and DriveThruRPG.com. Additionally, check out the Valiant Universe RPG landing page on DriveThruComics.com. 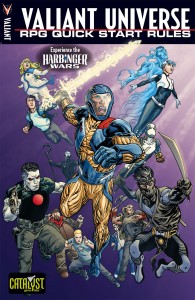 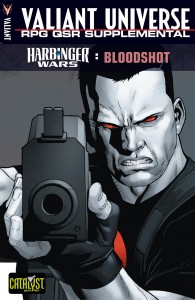 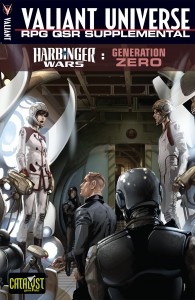 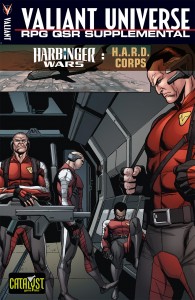 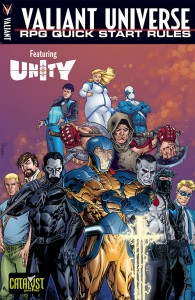 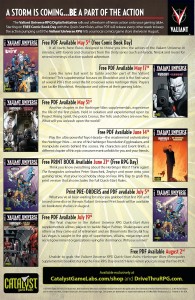