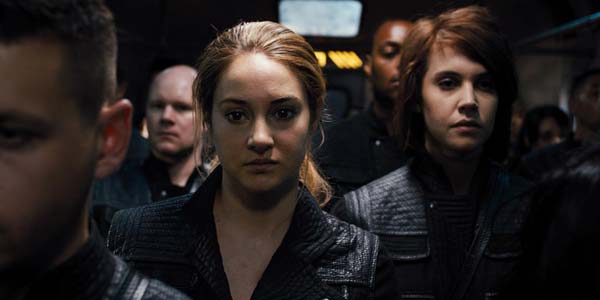 The latest Young Adult fantasy franchise is off to a good start with Divergent.

I don’t know if dystopian Young Adult fiction will ever be a genre in and of itself, or if all stories will live forever under the shadow of giants like the Hunger Games series, but Divergent— the latest film franchise hopeful– is almost strong enough to become its own thing entirely.  Well paced and well acted, this movie is a good start to a new story, and while it shares more than a few similarities with the tale of Katniss Everdeen, it proves there’s room for two at the top of the YA pile.

Like any good YA story, the plot of Divergent sounds fairly roundabout and asinine on paper. Chicago in the semi-near future has been restructured to follow a social model in which people are divided into five factions– Abnegation (the selfless), Amity (the peaceful), Candor (the honest), Dauntless (the brave) and Erudite (the intelligent).  16 year olds are given an aptitude test to determine which faction is the best fit for them, but they can either accept or reject this suggestion, and make their own decision on which faction to join.  But there’s no going back, lest you become factionless, a derelict life on the streets with no family or friends.

Our hero Tris (Shailene Woodley) was born into Abnegation, but wants to be one of the Dauntless, the warrior caste, which comes with the caveat of never seeing her family again.  It is during her screening that Tris discovers she is Divergent– someone with equal abilities in multiple factions– which makes her a perceived threat to the world order, painting a target on her back if her results were discovered.  Keeping the revelation a secret, Tris opts to join Dauntless, quickly establishing both friends and foes within the group as she partakes the initiation tests.

The movie takes its time rolling out the details and rules of this complicated social structure, and we rarely leave Tris’ perspective, adding a human element that prevents the world building from feeling too dry or clinical.  And the hot shot Dauntless crew lend themselves to lots of action as the new recruits train for their place in the sect, adding an energy to the proceedings.

As her training continues– knowing that the lowest ranking recruits will be kicked out and wind up factionless– Tris slowly befriends Four (Theo James), one of her instructors.  This is our requisite love story (because, YA), and while the romance doesn’t always synch up with the rest of the story, I found this relationship much more organic than Katniss’ love triangle in The Hunger Games, thanks in a large part to the chemistry between Woodley and James.

Our leads– especially Woodley– are strong enough to carry the movie, and clearly believe in what they’re doing.  Tris feels like a more proactive character than Katniss in some ways; where Jennifer Lawrence would seethe like a tiger waiting to strike at the injustice around her, Woodley plays Tris as more prone to charge head first, in keeping with her Dauntless ties.  The various levels of the Dauntless training, from physical skills to mental fortitude, keep Tris’ rise among the candidates fresh, while allowing her and Four to get closer to one another.

The rest of the core cast, Tris’ fellow initiates, is filled out with familiar faces like Zoe Kravitz and Miles Teller, each doing a lot with limited screen time, while Ray Stevenson and Mekhi Phifer add a certain gravitas as faction leaders.

But it’s Kate Winslet’s icy Jeanine, who dominates every scene she’s in.  Equal parts condescending and authoritative, Winslet brings with her a clear sense of menace to the Erudite leader, establishing herself early on as a “big bad” worth watching.  Like all great villains, Jeanine truly believes in her ideals, and that the increasingly awful things she does are for a greater good.  She adds a nice shade of grey to the moral workings of this world just when we’re getting settled in to how things work, and her motivation in the third act– which kicks off the bigger story of this trilogy– are understandable, if not entirely sound.

If I had a complaint about Divergent, it’s that a little too much of the movie feels invested in feeding its own future sequels– in some ways, the film feels like a two hour trailer for the next movie, when things really get moving.  But I can appreciate spending the time to wrap our heads around the intricacies of how this world functions, and establishing characters for whom we will remain invested for the rest of the franchise.  In that respect, Divergent certainly wins, as director Neil Burger gets through the mountains of exposition and character establishment without missing a beat or slowing things down.

Burger takes a journeyman approach to the entire movie; while none of the visuals or action beats were instantly burned into my retinas, I appreciate that they were uniformly well managed.  The action is solid and well orchestrated, especially the two battles that make up the third act, and the look of the film is equally sturdy.  While not incredibly unique, the ruins of Chicago serve as a constant visual suggestion as to why this new world order was established in the first place, and we’re given just enough hints of a greater mythology– like what exists beyond the fortified walls of the city– to pique my interest.

I left the theater interested to see where this story goes, either in book or movie form.  Yes, The Hunger Games kept coming up in post-movie discussion by pretty much everyone in the lobby.  But when it comes to big budget, well told stories featuring strong, talented female leads, there is no cap as far as I’m concerned.  We need more Hollywood movies about strong women, and the fact that we’re about to live in a world that has not one, but two successful franchises starring those types of people is as exciting as the movie itself.