On The Django Unchained Toy Controversy 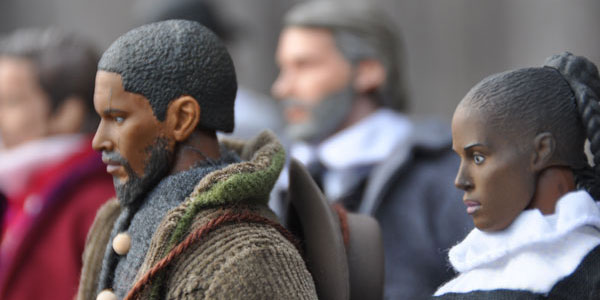 Not unlike the movie itself, NECA’s recent Django Unchained toy line has been met with criticism, with some labeling the toys as offensive, based on the property’s connection to slavery.  I didn’t talk about it in my review, so I’m talking about it now.

When I wrote my review of the Django Unchained retro action figures, I didn’t mention anything about these being controversial.  That wasn’t intentional, or unintentional– the thought that these toys would be considered risque never even crossed my mind.  Over the past few weeks, though, there’s been something of a backlash online against the toys, and while some of the arguments are bordering on fair, most seem to be based on a lack of understanding of the collector’s toy demographic.

Toy collecting for adults is a grey issue, and we’ve always been a small group, overall.  As such, many times the general public equates toys only with children.  This is a fair point– at the end of the day, everything Hasbro and Mattel produce is modeled with kids in mind.  There’s safety standards, media tie-in characters, appealing packaging… even collector-oriented lines like Marvel Legends and DC Universe Classics are established to be as cross-generational as possible, to catch the attention of kids and adult collectors.

That’s not the case with collector-focused companies like NECA or Sideshow or Hot Toys– these are toymakers who specifically create for and target to adult collectors.  Sure, some of their products still bridge the generation gap, with NECA’s video game lines occupying a healthy corner of the game figure aisle at Toys R Us, but the paradigm is switched– kids are the secondary market for these collector-driven companies.  It’s evident in the properties they select, R-rated movies like Predator, Alien and yes, Django Unchained.  And the writing is literally on the wall– the Django packaging clearly states these figures were intended for ages 17 and up.

But kids have been watching R-rated movies for decades, and there’s nothing blocking them from buying a toy intended for an adult collector… except the other aspects of these mature collectibles, like higher prices and specific distribution channels.  You can’t buy the Django figures at Toys R Us or Target, and I doubt they were even solicited that way– like many collector toys, their availability is largely focused on specialty stores, online web shops, and directly through NECA’s online store.  And there’s the price– again, I guess kids CAN technically buy these figures (if they are savvy enough to find an online retailer carrying them)… but of all the parents I know, not a single one would be willing to cough up thirty bucks per doll to buy these figures for their kid.

So the idea that little Timmy is going to be re-enacting America’s great shame with a Calvin Candie doll is pretty much a straw man argument.

What’s a much more interesting debate, however, is whether anyone should own a toy based on a slave owner.  There’s been villains in toy lines, well, as long as there’s been toy lines, and Leonardo DiCaprio’s reprehensible plantation owner was certainly an iconic on-screen villain, that much is clear.  I understand that, in light of real, historical events such as slavery, the assimilation of a character, good or evil, with the pro-slavery mindset of Candie might seem to be too much t some people.  But I view him no differently than the Joker or the Red Skull or the Predator– these characters have been captured in plastic and rank among the best toys of my collection.  Me owning them does not mean I endorse their evil actions, they belong to something bigger and broader than that…

I believe that movies, and pop culture in general, can be an invaluable tool, one that can be used to influence our way of thinking as a society.  Tarantino has a similar mindset– hell, Inglorious Basterds is, more than anything, a film about the power of film.  In that movie, Tarantino showed how film could be used as a weapon, one with just as much lethal force as a gun.  With Django, I saw the director expand on this concept, revealing that film can be a more positive tool than that.  With Django, Tarantino used film as a bridge to social and moral reparation– the film paints a stylized depiction of the evils of slavery and I think it does a fantastic job of tapping into the zeitgeist of historical recovery, celebrating the destruction of this awful institution and urging its characters– and viewers– to move past it, out of the shadows and into a better new world.

Throughout its history, exploitation cinema has been decried as racist, but I don’t think that’s often the case.  Films like Foxy Brown and Shaft are hallmarks of the exploitation genre, and I find them to be among the most empowering movies I’ve ever seen.  I don’t hesitate in the slightest to include Django in that catalog– much like those classic staples it’s a film that shows Tarantino put his own distinct, stylized brand on very important social issues such as race and class.  Just because the film focuses on ugly topics doesn’t mean it shouldn be ignored as part of pop culture.  Quite the opposite– a film like Django should be enjoyed as an entertaining thesis on everything it covers, from love and freedom to cruelty and morality.

What I will not say– regarding the toys OR the movie– is that it’s “just a movie.”  Yes, Django was a supremely entertaining film.  But as I said, pop culture is, or at least can be, something more important than what we consume while shoveling popcorn into our faces.  Django doesn’t trivialize slavery and racism in the slightest, it just takes a more abstract and stylized brush to these concepts and, well, rips them a new one in the most entertaining way possible.   To me, the Django toys are a reminder of this film, and the power it has incited in its legions of fans.  Just like the film they’re based on, these toys are cool and fun and serve as a memento to Tarantino’s bold and unique cinematic vision.  Yes, even the Calvin Candie figure.