Dominic Cooper Will Be Jesse Custer on AMC’s Preacher 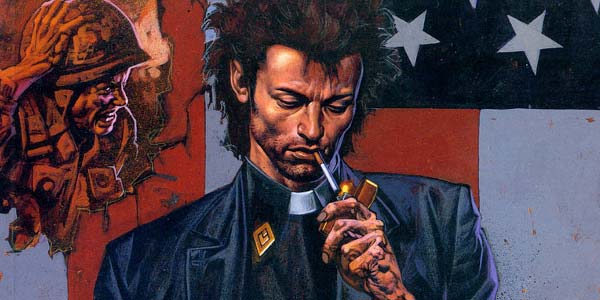 I have a cautiously optimistic outlook on AMC’s impending Preacher TV show, mostly based on how interesting I find the cast and crew.  None of these folks are the ones I would, in a million years, peg as the most obvious choices to bring the classic Garth Ennis/ Steve Dillon Vertigo comic to life… but they are all, if nothing else, very intriguing choices.

Having Seth Rogen and Evan Goldberg develop this show actually feels very exciting.  Yes, their background is in most overtly in comedy, but they’re great with characters, which is also Ennis’ strong suit.  And Preacher was a damn funny story, actually.  If the show is going to lean one way or the other, I’d rather they skew more funny than more dour and self-serious, which would help set them apart from the more serious-minded comic book shows all over the small screen.

Thus far, I’ve been pretty on board with the casting choices– over the past few weeks, we’ve seen Ian Colletti cast as Arseface, Joseph Gilgun as Cassidy, and Ruth Negga coming onboard as Tulip.  Now, Rogen and Goldberg have announced their Jesse Custer, the series’ eponymous Preacher… and it’s none other than Dominic Cooper.

We have Jesse Custer! @dominiccoop is gonna save our souls. #Preacher

This is yet another choice that’s nowhere near my expectations… and I mean that in a good way (I think).  I can totally see Howard Stark as the depressed, boozy, loud-mouthed Jesse Custer at the start of the show… but I am having trouble envisioning him in the role as Jesse continues on his John Wayne-fueled hero’s journey.  Not that I necessarily don’t think he can do it.. I just literally cannot picture it.

I’m taking the general weird feelings this production is instilling in me as a good thing (for now).  Everyone involved has proven their talent in the past, and I have a feeling Rogen and Goldberg could bottle a very specific kind of lightning to make this TV show something truly special, and worthy of the excellent source material.

Or, it could be a total trainwreck.  The one thing I’m not seeing much room for is anything in between with this one.