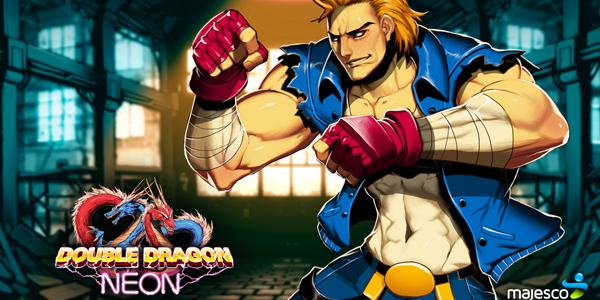 Double Dragon, specifically its beloved console debut back in 1988, still holds a special place in gamers’ hearts.  Unlike many blockbuster titles of that era, however, it lacked the staying power to maintain relevancy.  There were a few fantastic sequels over the years, although most were awful, and recent remakes of the original arcade version on XBLA and iOS fell flat.  Today, WayForward, the developers behind the excellent Bloodrayne: Betrayal, take a shot at returning the franchise to its former glory in Double Dragon: Neon.

Prepare yourself for a trip down memory lane, because Double Dragon: Neon is as much a love letter to old-school brawlers in general as it is to its namesake.  While the title stays firmly rooted in the Double Dragon universe, it introduces the franchise to mechanics have become genre staples — the ability to now find and enter storefronts that are scattered across (and sometimes hidden in) levels felt a lot like River City Ransom.  Other areas, from a fast-scrolling level that sees players sliding into a cavernous abyss at breakneck speeds to booby-trapped environmental items — even the way some enemies with burst onto the playfield from the foreground area — are sure to remind you of the days you spent grinding through Battletoads or TMNT: Turtles in Time. 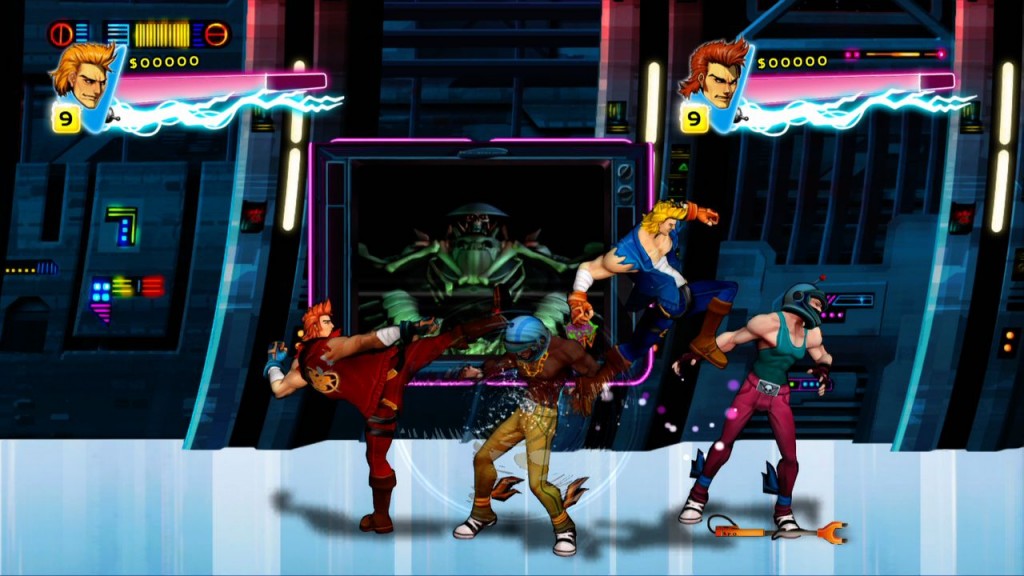 But enough comparisons, because while Double Dragon: Neon is bursting at the seams with nostalgic references and throwbacks, it keeps things remarkably fresh and, more importantly, downright fun.  As soon as you start a new game, you are immediately greeted by Double Dragon’s iconic pre-stage music, lovingly remade for this title, and witness a classic scene play out as a thug wails your girlfriend, Marian, in the stomach and carries her off.  You (and a friend if you are playing cooperatively) give chase in an intro level that plays around with recreating the original’s layout.  Everything is pretty familiar until WayForward pulls a total misdirection and sends you into …space?  That’s right, Neon takes Billy & Jimmy Lee into some decidedly crazy territory and pits them against a colorful cast of baddies.  Sure, the classic “William” models are still present, as are the leather-clad vixens with whips, but you’ll soon enough be pit against zombies, rocket troopers, flying robots, and teleporting geishas to name a few.  New to the series are truly over-the-top bosses — Ever wonder what the plant-creature from Little Shop of Horrors would look like if it were two stories tall and had a dragon and a shark head at the end of its vine-like tentacles?  Well, this title will put your curiosity to rest. 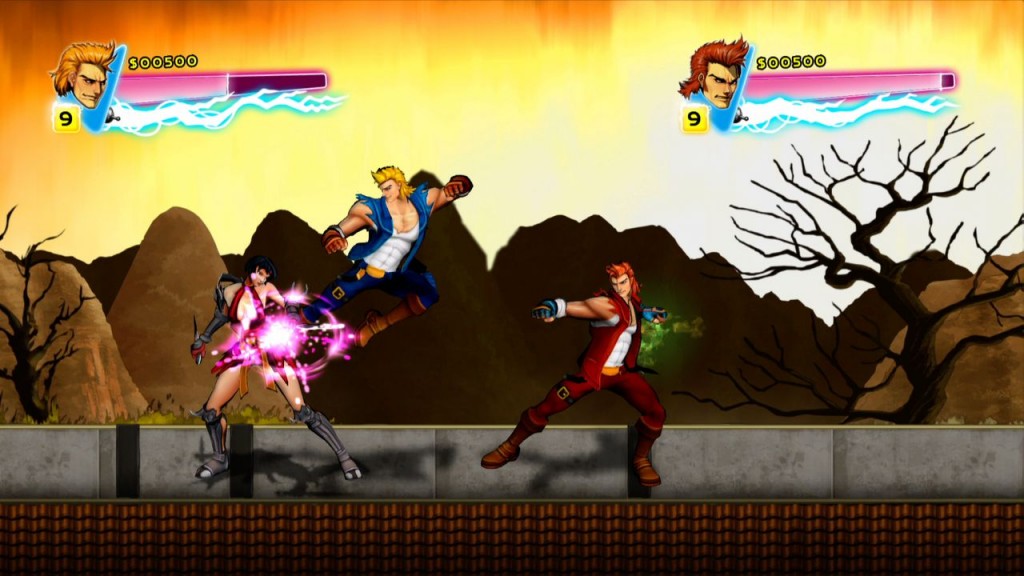 A fun cast of characters means nothing without the gameplay to back it up though, and luckily Double Dragon: Neon’s old-school sensibilites makes beating the snot out of everything in sight a fun, frantic, and challenging experience.  By the time you reach the final battle with the game’s main villain, Skullmageddon (imagine Tekken’s Yoshimitshu crossed with Skeletor), Billy & Jimmy are really put through the wringer, with many areas serving as attrition wars, custom-tailored to wear down your HP.  While it’s certainly easier playing with a buddy than taking it on solo, there are areas that are just punishing, specifically because depleting your stock of lives means it’s back to the beginning of the level for you.  While this is nothing new for the fans of the classics, new players may be put off by the grueling difficulty they’ll face late in the game.  And that’s just the normal difficulty — upon beating the game, higher difficulty options are unlocked, but I wouldn’t suggest tackling them until your powers are nicely leveled up. 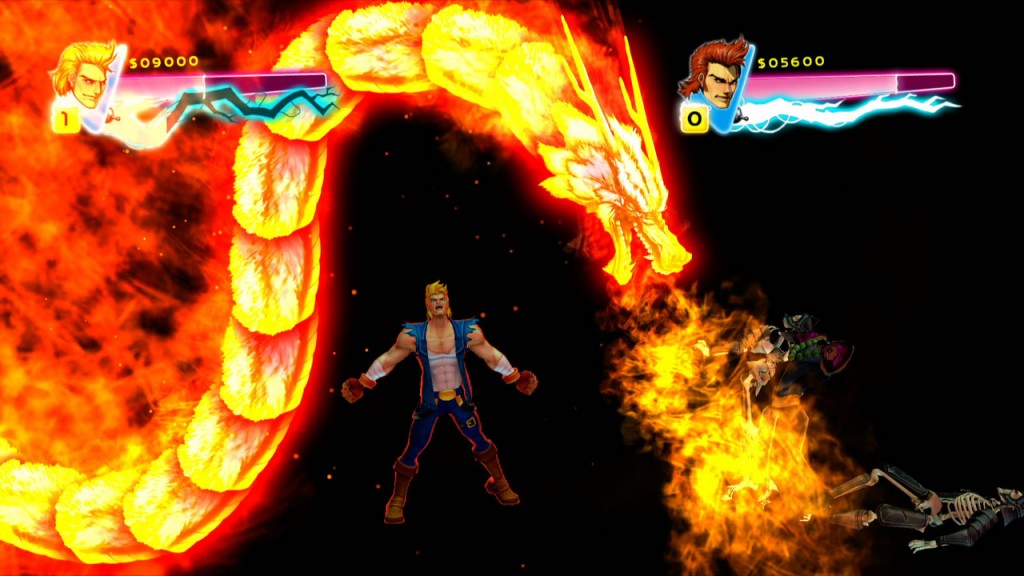 Speaking of powers, Double Dragon: Neon has a robust “Sōsetsuken” system, represented by mixtapes that you can collect throughout your adventure.  These tapes can grant players both passive stat-boosts or special powers ranging from fireballs and lightning storms to spin kicks and ghostly dragon attacks (triggered by pressing the right bumper at the expense of your magic meter).  Each time you collect a randomly dropped mixtape, it levels up that power by one and, while they can be leveled up all the way to 50, you will need a sufficient amount of Mythril shards (obtained by defeating bosses) to purchase the ability to raise the level cap every ten levels.  It’s a mechanic that’s sure to keep completionists playing until they fully upgrade the destructive power of their character.  Better yet, when you hover over each mixtape in the menu section, a delightful ’80’s-inspired synthpop tune plays along with it.  It’s a great touch that expands upon an already killer score. 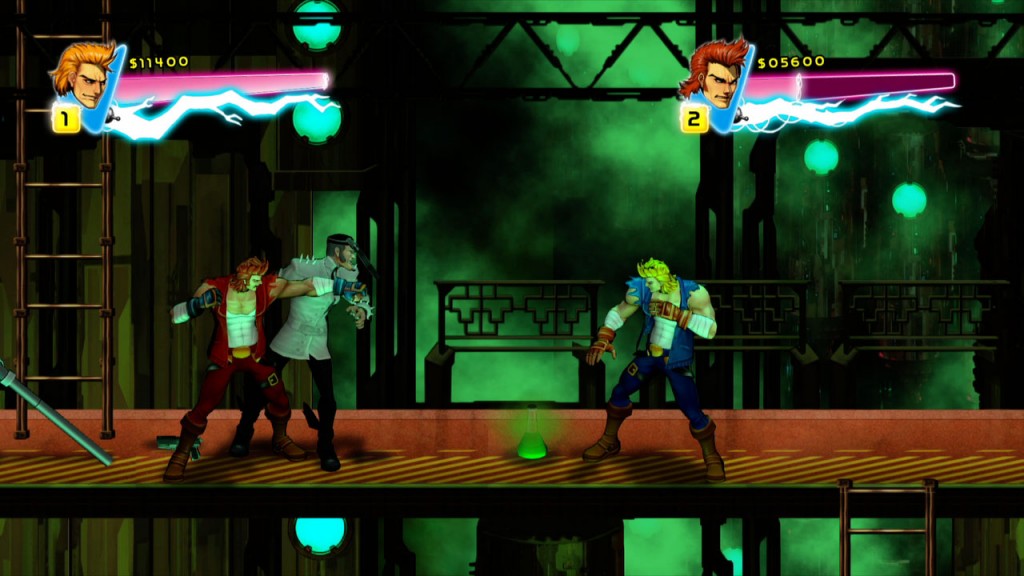 Aside from this interesting addition, the standard battle system fairs as well as one could hope.  Punches and kicks are assigned to their own buttons, as are grapples/throws and, of course, there’s a jump button.  There is also a dedicated button to sprint and this title expands on previous iterations of the game by adding a dodge button as well.  By timing your dodge perfectly, you temporarily glow red and enter a “gleam” mode where your attacks are substantially more powerful.  While playing co-op (or “bro-op” as it were), you can also flick the right analog stick a certain direction to high five the other player and trigger either both brothers to enter gleam mode or share/steal health with each other.  Not only is it a useful concept, but it’s good fun to see in action.  While online co-op had not been patched in yet at the time of this review, couch co-op is a great time and makes the challenging later levels less of a controller-throwing, tantrum-inducing venture. 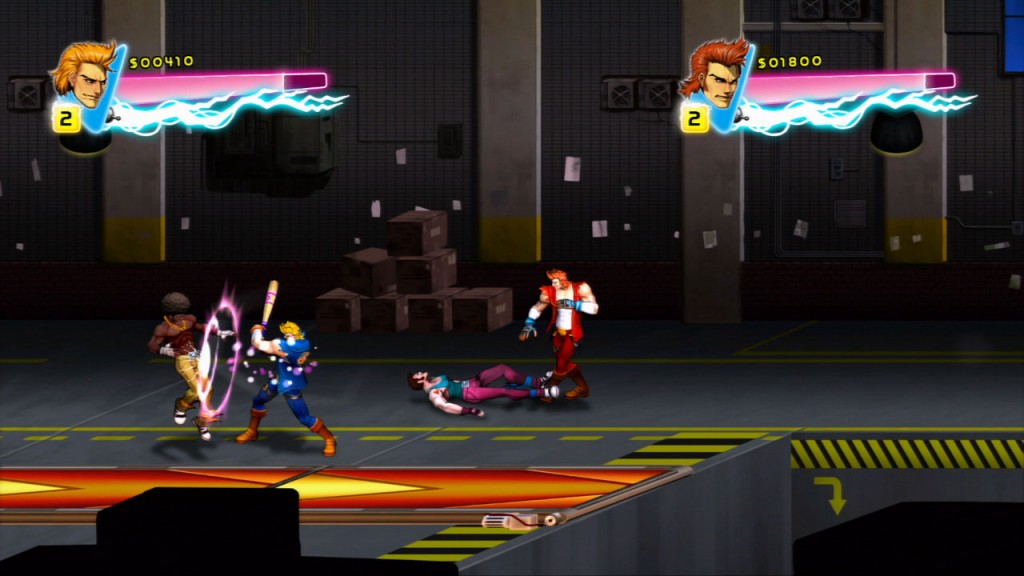 Graphically, the game maintains the classic charm, even with a fresh coat of paint.  There are plenty of slick effects, great use of lighting (love the backlit silhouette areas), and cool animations throughout, but the developers never forget the audience they’re playing to.  Load times are almost non-existent and the framerate keeps up no matter how frantic the action gets.  With it’s old-school leanings, however, you’ll likely experience some of the more frustrating issues inherent in classic brawlers as well.  For example, sometimes characters won’t line up properly on the 2D playfield and attacks won’t connect.  While this can add to the difficulty factor, it doesn’t detract from the fun you’ll be having.  Between the simple tried-and-true combat and lighthearted aesthetics, Double Dragon: Neon’s ten explosive levels (which can be run through in about three hours per playthrough) are sure to appeal to gamers new and old.  It’s available now on PSN and XBLA for $9.99