Downfall of Pomeii Gets a Reprint from Mayfair Games 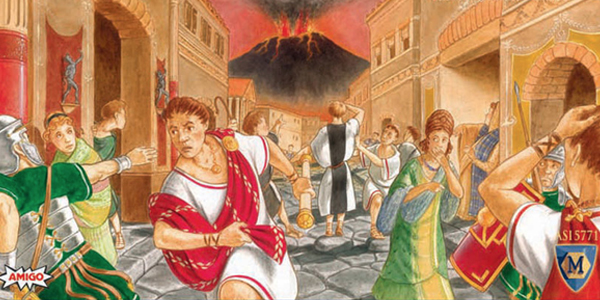 Originally released nearly a decade ago by German publisher Amigo, and seeing an initial domestic release in 2006, The Downfall of Pompeii has become a sought-after gem after having gone out of print some time ago. Now, Mayfair Games has brought this fantastic title back with several tweaks and a cheaper price point. 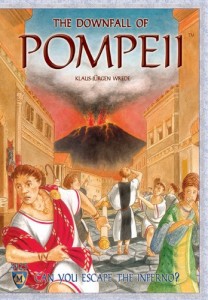 Designed by Klaus-Jürgen Wrede, best known for creating Carcassonne, Pompeii is a lighter game involving hand management and tile placement mechanics with a couple interesting twists.  More importantly, its theme, which centers around a rather grisly and tragic moment in history, is applied brilliantly.  Split between two phases, the game begins as players take turns trying to place a large number of colored octagonal posts within the city of Pompeii, representing the growing population and prosperity of the area following a massive earthquake in 62 AD. The game shifts into its final phase as Mount Vesuvius erupts and begins to cover the city in lava while the players attempt to evacuate as many of their placed population markers as possible.  The winner is the player who manages to escort the most inhabitants to safety outside the city walls.

The set up and components, much like the game’s mechanics, are pretty straightforward and simple.  Each player will first receive the pieces of their chosen color.  Previous editions of the game included a higher number of pieces for two of the colors and less for others as more would be used in a two player game versus one with four players.  This essentially limited the colors that could be used in a two-person game.  Not that it was a huge issue, but the reprint fixes the issue by including 30 pieces for each player, which should be plenty for anyone to use regardless of player count.  A deck of cards is then set up for play.  Most of these cards feature thematic artwork on a colored background with a number printed in the corners.  These correspond to colored and numbered regions of the city on the game board.  This fairly accurate representation of Pompeii’s layout is broken down into dozens of buildings that are capable of holding 2-4 player pieces each.  Then, the entire map is further broken down into a grid of squares, to be used for movement later in the game.

Seven 4-card piles are constructed and the rest are shuffled together with seven “Omen” cards depicting a smoking volcano.  A menacing “79 AD” card is shuffled into the last 10-15 cards in that deck and another is placed on top.  Four of the previously made piles are given to the other players (assuming there are four of them), two are placed on top of the deck and the remaining cards are returned to the box.  This way, each player begins with a hand of four cards, there is one 79 AD card as the ninth card in the deck, followed by the rest of the games cards which include the seven omens and, near the bottom of the deck, the final 79 AD card. 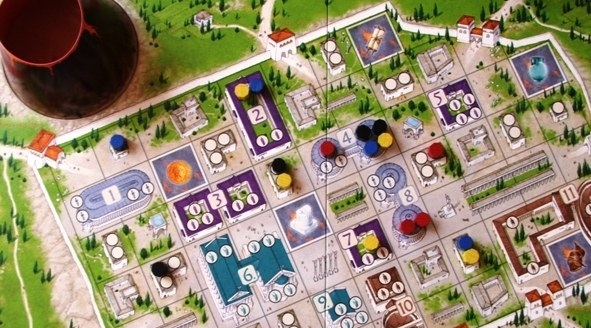 On each player’s turn, they will play a card from their hand and place one of their population pieces on any open space in the corresponding building.  In addition, if placing in a building that already houses one or more pieces, that player may then place an additional piece for every other marker that already existed in that space.  These additional pieces can either be placed in another building of the same color or any neutral (beige-colored) building. Once the pieces are placed, the active player draws another card and play passes clockwise.  The first appearance of the 79 AD card indicates that Vesuvius is seething and that Omens will begin to show up.  If, at the end of a player’s turn, they draw an Omen card, they immediately discard and replace it, then may remove on opponent’s piece from the game board and drop it into the volcano.  I neglected to mention earlier but, while a flat, illustration of a volcano on the board may be what you were expecting; The Downfall of Pompeii comes with a thin, plastic, three-dimensional volcano that you will construct and place in a circular, cut-out area of the board.  It looks great while adding to the fun and immersion.  While it seems strategically sound to place your “people” close to the city gates, these are often the first to get destroyed by others when an Omen is pulled. 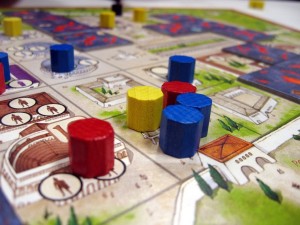 If a card is played for a building which is already full, it acts as a wild card, and can be counted towards any building.  Play continues until the second 79 AD card is revealed, which shifts the focus to fleeing the city as the volcano erupts and the lava begins to flow.  Before anyone is able to move their pieces, six lava tiles are blindly pulled from the supplied bag and placed on the board.  Each lava tile contains a small icon which shows what space on the board the first like tile is placed and others sharing that icon will then branch from.  Each tile drawn will either be placed on the starting space or adjacent to another tile with the same icon.  Interestingly enough, many of the starting spaces are close to city gates, meaning that exits may be blocked off quickly.  Once play resumes, the active player must now draw a new tile from the bag and place it, then move two of his or her pieces towards a city gate to get to safety.  First, when a tile is placed, any pieces that were on that space are tossed into the volcano.  Movement is then dictated by how many total pieces are in the space occupied by the “person” you wish to move.  For example, if the piece you wish to move currently sits in the same square space as three other pieces, you can move it four spaces towards an exit.  A player must move two different pieces up to their maximum range.  A player may instead move one single piece twice, but only if it is their last remaining piece or it started in a square all by itself.

Obviously, as play passes, more and more lava tiles begin to cover the board, burning up the survivors or boxing them in with no hope of escape (these are also ultimately thrown into the volcano).  The winner is the player who managed to get the most pieces out of the city.  In case of a tie, the player with the least amount of pieces in the volcano claims victory.  Strategically, there is more at play than I gave the game credit for initially.  Obviously players will want to get as many of their people out on the board as possible in the early stage of the game. Astute players will likely want to aim to place in buildings that already contain other pieces, thus granting them larger bonuses for additional placement, and then use that bonus to place into buildings with fewer open slots (to block opponents from bonuses) or which have fewer cards in the deck (this info is noted on the bottom of the card) as the odds of drawing it are slimmer. 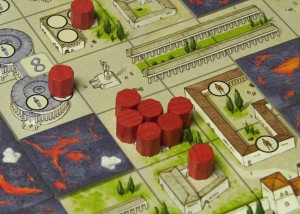 At the same time, players will want to stay spread out instead of clumped together in one area.  This may seem like a good strategy initially, but can lead to a large number of your pieces being boxed in by lava.  Because of the movement potential later on, players will want to keep their pieces well-dispersed nearby their opponents. Chaining movement is incredibly important late in the game, especially since the number of people you’ve saved is out for everyone to see, and everyone else will definitely be gunning for the leader when it comes time to place their lava tiles.  All in all, the Downfall of Pompeii is a great gaming experience and seemingly custom-tailored to get people laughing and having a good time.  Throwing opponents’ pieces into an erupting volcano definitely ranks among the most entertaining perks in any tabletop game I’ve played.  There are some drawbacks to be found in the reprint however – for one thing, the bag that houses the lava tiles could have definitely been larger.  The original printing came with a bigger red bag while this edition is packaged with a thin white bag that, while serviceable, doesn’t offer a lot of room to shuffle the tiles around in.  I ended up swapping it out with a larger cloth bag.  The box itself is also dialed back.  While the first edition came in a larger, Power Grid sized box with compartments and an insert for the different pieces, this is very bare-bones and comes in a small, but slightly thicker, box.  This new print, however, does come with three dual-sided lava tiles which add a little extra flavor to the game which were not included with previous versions and, at an MSRP of $35, you really can’t beat the price for what you get.  Pompeii is definitely worth grabbing before it’s out of print again.