Dr. Who Could Be A Woman 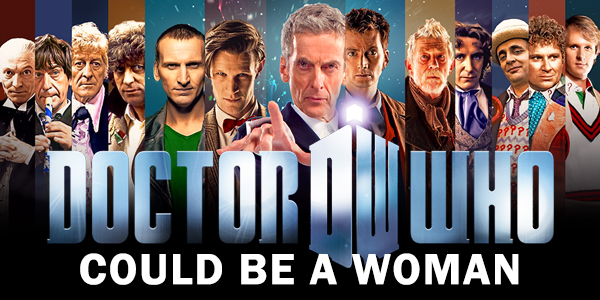 The Seventh Doctor doesn’t think the role could be played by a woman, but I think it would be fantastic.

I am by no means a Whovian. Let’s just put that out there from the get go. My passion for the show starts at the Chris Eccleston reboot and keeps as current as Netflix can add them to their servers. I thoroughly enjoy the show, and love its takes on time, perception, and the unexplored universe. Its characters grow and adapt with their understanding of their surroundings, and never fail to come up with just the right idea in the nick of time.

Most fans of the show know Sylvester McCoy as the 7th actor to don the titular role in the Dr. Who franchise. For the more casual fans, he was the one in the odd sweater and panama hat that carried the Edward E. Nygma umbrella. He also happens to be the actor to last play The Doctor before the original run of the show was cancelled. It’s McCoy’s opinion that The Doctor could only ever be played by a male actor. He said, “Doctor Who is a male character, just like James Bond. If they changed it to be politically correct then it would ruin the dynamics between the doctor and the assistant, which is a popular part of the show.”

As a big fan of the character River Song, I disagree with McCoy’s thoughts on the role, and would encourage Dr. Who to consider following Peter Capaldi with a strong female character. I will admit that I thought River was a future version of The Doctor, and that it was obvious that he loved her, because he really loves himself. Plus, she knew how to fly the TARDIS better. Aside from the simple gimmick of doing what’s never been done before, and opening up new storylines to explore, changing The Doctor’s gender would follow in the show’s tradition of being innovative and compelling while evolving with pop culture.

There are die hards that think the character is and always should be male because of tradition. However, it is not uncommon for the writers to adjust tradition if it helps improve the story. For example, The Doctor was only supposed to be allowed to regenerate twelve times. Thankfully due to some clever writing and the help of the Time Lords, he can now regenerate another twelve times. What’s interesting is that a Time Lord changing genders after regeneration has already happened in the Dr. Who universe. In the episode “The Doctor’s Wife,” the Doctor refers to another Time Lord who had male and female versions. Also, in the episodes of  “Dark Water” and “Death in Heaven” the Master is depicted as a female version in one of his previous regenerations. So it really wouldn’t be much of a stretch if, after some unfortunate run in with a Dalek or Cyberman, the Twelfth Doctor met his demise and made way for a Wonder Woman inspired Doctor to emerge.

This change would affect so much more than just the Dr. Who world. Not only would we see a pause in the “helpless female companion” stories. We could get a strong female role model that bends our understanding of a character like Lucy Liu’s take on Watson, Spider Gwen, or the current version of Thor. The Doctor could embody the struggle of people like Caitlin Jenner, and help those who don’t get it, understand what it feels like. We could get an awkward male companion, who thinks he’s permanently friend-zoned due to his lack of confidence. After some time and adventures with The Doctor, he finally builds up enough courage to kiss the girl (or guy) of his dreams. Basically, what I’m saying, is that making The Doctor a woman would help the show continue to progress with the time, and adapt to its viewership.

Lastly, and most importantly, why not? Any convention goer can attest to the growing armies of loyal female cosplayers who pay tribute to every variation of The Doctor. The fans are also getting younger, with more families watching the show together, allowing younger minds to find their way to the TARDIS. These fans are ravenous for the show and could just as easily latch on, learn, and be entertained by a female Doctor all the same, as long as it’s the right actor. I agree with the show’s writer Steven Moffat that not just any woman could play the Doctor, but I’m sure there’s a English woman out there made for the role. Maybe she’s even Scottish and the Doctor can finally get that red hair she’s wanted. Best part is, if they try it and everyone hates it, The Doctor still has plenty of regenerations left.