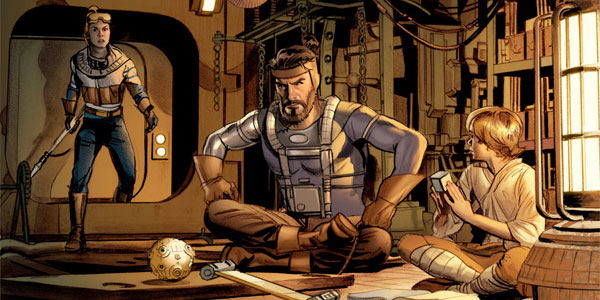 Dark Horse and LucasFilm are going way back for their new Star Wars comic series, and the new comic may be something totally worth reading.

One of the things I always loved most about Star Wars was how every facet of the franchise made my imagination go completely wild. From Obi Wan’s first name drop of The Clone Wars, to the various “making of” specials, magazine features with early concept art… I just couldn’t get enough looks behind the curtain of my favorite movies of childhood.

That’s why I’m amped for the news Dark Horse and LucasFilm broke at Wonder Con– they are launching a new comic series called The Star Wars, which will be a direct adaptation of George Lucas’ first draft script for the movie that would become a classic. The first draft has long been rumored and hinted at, through the gorgeous concept artwork by Ralph McQuarrie, and more than a few concepts allegedly being repurposed elsewhere in the Star Wars universe, but this will be the first time the whole original concept will be released in a public medium.

It will be cool to see the fun hybrid characters any Star Wars fan worth their salt has already seen– the reptilian Han Solo, the older Luke Skywalker… but I’m very intrigued to see how the story will play out compared to the final version that saw release in 1977. Will the story be just as strong? Will the changes made be for the better or for the worse (we’ve seen plenty of both from Lucas in his career since)…

I’ve never been an Expanded Universe kind of guy– I tend to avoid most franchise-based comic books, and Star Wars in particular never really grabbed me in comic form. But this concept feels different, and vastly more interesting than how Boba Fett got out of the Sarlaac Pit… this feels as much like film history as an extension of the series, and I think it has a lot more potential than simple fan service.

LUCASFILM AND DARK HORSE ANNOUNCE THE BIGGEST EVENT IN THE HISTORY OF STAR WARS COMICS!

George Lucas’s original-draft screenplay for The Star Wars to be adapted by J. W. Rinzler and Mike Mayhew!

“I’m not sure where I first read about The Star Wars—it was years and years ago—but the idea of Luke Skywalker being an older Jedi General, and Han Solo being a six-foot-tall lizard, turned my Star Wars fan brain on its side,” said longtime Star Wars editor Randy Stradley. “I always assumed this would be one of those stories that would be ‘lost to history,’ so getting to work on bringing it to life is kinda like a dream come true.”

“While researching in the Lucasfilm Archives I’ve found many treasures—but one which truly astounded me was George’s rough draft for The Star Wars. His first complete imaginings were hallucinating to read—mind blowing,” said writer J.W. Rinzler. “While working with George on another book project, I once asked if we could adapt his rough draft. He was hesitant. Years later, with Dark Horse’s invaluable help, we showed him a few drawn and colored pages of what it might look like. He gave us the okay.”

Originally conceived in 1974, The Star Wars has been the subject of rumor and legend in the fan community throughout the history of the galaxy far, far away. Now, Lucas has seen fit to grant Dark Horse the right to adapt this fabled story into an eight-issue comic series launching in September!

Founded in 1986 by Mike Richardson, Dark Horse Comics has proven to be a solid example of how integrity and innovation can help broaden a unique storytelling medium and establish a small, homegrown company as an industry giant. The company is known for the progressive and creator-friendly atmosphere it provides for writers and artists. In addition to publishing comics from top talent such as Frank Miller, Mike Mignola, Neil Gaiman, Brian Wood, Gerard Way, Felicia Day, and Guillermo del Toro, and comics legends such as Will Eisner, Neal Adams, and Jim Steranko, Dark Horse has developed its own successful properties, including The Mask, Ghost, Timecop, and SpyBoy. Its successful line of comics and products based on popular properties includes Star Wars, Mass Effect, Buffy the Vampire Slayer, Aliens, Conan, Emily the Strange, Tim Burton’s Tragic Toys for Girls and Boys, Serenity, and Domo. Today Dark Horse Comics is the largest independent comic book publisher in the US and is recognized as one of the world’s leading publishers of both creator-owned content and licensed comics material.

Lucasfilm Ltd., a wholly owned subsidiary of The Walt Disney Company, is a global leader in film, television and digital entertainment production. In addition to its motion-picture and television production, the company’s activities include visual effects and audio post-production, cutting-edge digital animation, interactive entertainment software, and the management of the global merchandising activities for its entertainment properties including the legendary STAR WARS and INDIANA JONES franchises. Lucasfilm Ltd. is headquartered in northern California.