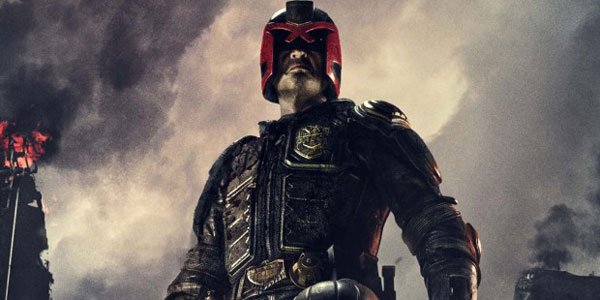 The classic 2000 AD anti-hero gets a new life on the big screen, and the result is a delightfully bloody, gun-toting good time.

Dredd 3D is sure to draw comparisons to the vile cinematic abortion that was Sylvester Stallone’s complete mishandling of the character back in ’95, but any fan of Judge Dredd won’t bother with that– we divorced ourselves entirely from that mess decades ago.  I went in to Dredd, the new cinematic adaptation of the cult favorite instead curious how it would measure up to the subversive 2000 AD comic series, and while it doesn’t measure up to that batty comics universe, it’s still a fantastic, adrenaline-pumping time in the theater.

I’m going to gloss over what didn’t work first, as it’s mostly inconsequential.  Fans of the 2000 AD series should know there’s a few things missing in this movie version, and yes, they are missed– while the dystopian world of Mega City One is illustrated nicely, the weird flair of armless thugs, cybernetic mutants and killer robots have been toned down for this film. The aesthetic choices made by director Pete Travis do a good job of selling this cold, post apocalyptic environment, but it seemed too close to the vest– whether it was a stylistic choice to ape Chris Nolan’s obsessive use of realism in a comic book adaptation, or just a simple budget mandate, I wanted to see how weird and wild the cinematic Dredd universe really was, but aside from a few references to the mutants on the outskirts of society, I was kind of left wanting more… Of course, wanting to see further and experience more of a movie’s world is certainly a soft criticism, at most.

The other element totally extracted from the source material is the satire married to virtually all of Dredd’s actions. The Judge of the comics was, essentially a parody of himself and the rest of his trigger-happy, hyper-violent ilk. That layer of subversive satire isn’t there in Karl Urban’s portrayal, and for the first ten minutes of the film I was afraid Dredd would be toned down and sanitized, so he could be passed off as a “good guy.”

Boy, was I wrong!

What the cinematic Dredd lacks in clever subversion, he makes up for in sheer and utter badass-ery, and he is without a doubt the most entertaining comic book tough guy we’ve seen on the big screen in years.  Urban does a fantastic job with the character, with a voice made out of pure gravel, and a craggy, unshaven jaw protruding from underneath that iconic helmet, molded into a permanent scowl that would make artist Carlos Ezquerra proud.  By the time the action really gets going, Dredd is exactly as he should be– a by the book tough guy who’s as cold and hard as this battered and grimy society.

One of the wisest choices the movie makes is containing the story.  Instead of a sprawling epic (or, I shudder to even mention, an origin story), the movie essentially follows Dredd and Anderson, the mutant rookie he’s been charged to train, on a single assignment. This particular mission starts as a low-level drug bust in a dilapidated mega-slum called Peach Trees, but when the Judges capture a perp for interrogation instead of killing him, the drug kingpin/ warlord who runs this turf, Ma Ma puts Peach Trees on lockdown, demanding the residents bring her the judges’ heads on a platter.

What plays out from here is an ongoing free-for-all, as Dredd and Anderson, with their perp in tow, fight their way through the criminals trying to kill them, as they uncover more details of Ma Ma’s empire and the new designer drug she’s controlling, called Slo-Mo.  As the action progresses, Dredd opts to take the fight to Ma Ma, to shut down this entire empire.  If it sounds familiar, the plot to Dredd is really similar to Gareth Evans’ The Raid, sharing that amazing movie’s structure of ascending the building from the inside, not unlike a video game. While Dredd lacks the incredible style of the action on display in The Raid, the shared format works well, and gives Dredd plenty of chances to do what he does, obliterating perps with reckless abandon in baths of blood and bullets of varying levels of destruction.

The action in Dredd is capable, if never particularly Earth-shattering, and Urban plays Dredd as the perpetual straight-man– he’s never flashy or silly with his ample distribution of carnage, instead opting for practicality.  His interaction with Anderson (played by the lovely Olivia Thirlby) is fun, as his growing admiration of her skills is shown in only the most subtle ways, through his still-clenched teeth. Thirlby sells the rookie Judge, fixated both on impressing her mentor, following the rules and trying desperately to mask the fear of death facing her head on.  Anderson is a psychic, and her mental abilities prove to be a great asset as the Judges take the fight to their captors, and she gets some badass moments of her own before the movie ends.

I almost wish Dredd had aped The Raid a little bit more, because the one thing I feel didn’t come together were the use of video game-like “bosses” to punctuate the action. There’s not much of that in Dredd, with only a handful of non-generic villains, many of whom are taken out without any special spotlight on the combat. It leads the action to drag at times, when it starts to feel too same-y, but I found myself getting pulled back in as quickly as I faded out as the tight pacing keeps the plot– and Dredd’s tactics– moving forward constantly.

I brought up The Raid in this review due to the similar structure, but really Dredd is the cinematic soulmate of Lexi Alexander’s incredible and underrated Punisher: War Zone.  Both movies are filled with a complete abandon for the dull tropes of comic book movies, ignoring anything related to origins, and clearly uninterested in softening our heroes to make them more easily palatable for the mainstream. Instead, Urban’s Dredd, much like Ray Stevenson’s Punisher features a trigger-happy performance with a true knack for violence and carnage.  There’s a gleeful quality to the gore and guns and insanity on display in both movies, and it works perfectly for an anti-hero like Dredd.

Punisher: War Zone never found an audience that appreciated what it was trying to do.  Like that overlooked classic, Dredd holds no punches and proudly sticks a middle finger at the way comic book movies “should be.” I sincerely hope Dredd finds the audience War Zone never did, because it’s a bloody good time, and I want more.