Another issue of Previews is out, and it’s full of new items coming your way from Diamond Select Toys!

Characters from iZombie, The Muppets, X-Files, Marvel, My Little Pony, Batman, Back to the Future and more are now up for pre-order, in the form of action figures, Minimates, banks, busts and even cookie jars! Read on for more info, and pre-order at your local comic shop, or at diamondselecttoys.com! 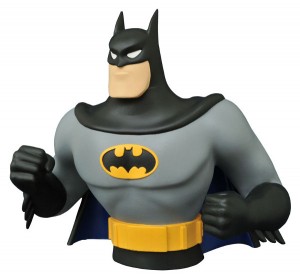 A Diamond Select Toys release! The battle for the loose change of Gotham City has begun! This approximately 8” vinyl bust of Batman, as he appears in Batman: The Animated Series, is actually a bank, with a coin slot in the back and an access door in the base. But it features detailed sculpting and exacting paint details that make it look like a high-end collectible! With Batman, Robin, The Joker, Harley Quinn and the Batmobile now available as vinyl banks, there’s never been a safer place in Gotham City to keep your money! Packaged in a clear polybag. (Item #DEC152118, SRP: $22.99) 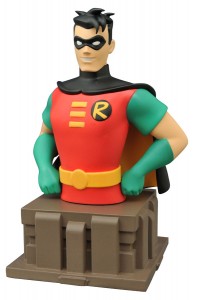 A Diamond Select Toys release! Batman needs his Robin, and so does your bust collection! Dick Grayson, the original Robin, is the latest addition to DST’s line of busts based on Batman: The Animated Series. Posed triumphantly atop a pedestal base, he’ll fit right in on your shelf, next to Batman and his rogues! Measuring approximately 5.5” tall, Robin comes packaged with a certificate of authenticity, and is limited to 3,000 pieces. (Item #DEC152119, SRP: $59.99)

Back to the Future BTTF 30th Anniversary Minimates 1885 Box Set 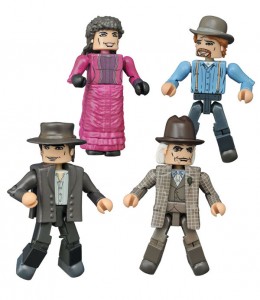 A Diamond Select Toys release! It’s time to go back in time… again! The newest 30th Anniversary Minimates box set based on the Back to the Future trilogy takes you all the way back to 1885! Four new Minimates, including Celebration Marty with his pistol and pie plate, Festival Doc Brown with the framed photo, and two never-before made characters – Clara with her telescope and Seamus McFly with Marty’s gun and belt! Each 2-inch Minimates mini-figure features 14 points of articulation and fully interchangeable parts. Set comes packaged on a full-color blister card. (Item #DEC152115, SRP: $24.99) 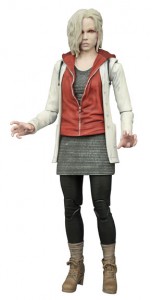 A Diamond Select Toys release! The iZombie action figure just got a power-up! This Previews-exclusive variant on DST’s action figure of Liv Moore from iZombie features Liv in full-on zombie mode, with red eyes, veiny skin and a mad-on for some brains. Based on the hit CW TV show, this 7-inch scale figure includes interchangeable hands and accessories, and comes packaged on a full-color blister card. Only available at comic shops and specialty stores! (Item #DEC152114, SRP: $19.99) 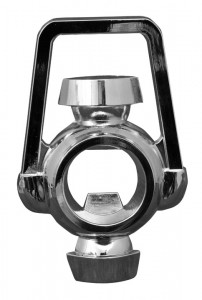 A Diamond Select Toys release! Let those who need a drink tonight, call on the power of Green Lantern’s light! This 4” sculpted metal bottle opener is in the shape of Green Lantern’s power battery from the Justice League Animated Series, and will remove a bottle cap almost as fast as you can think about it. Plus, magnets on the back keep it locked to your refrigerator so you don’t have to wait to recharge! Packaged in a full-color slipcase. (Item #DEC152120, SRP: $18.00) 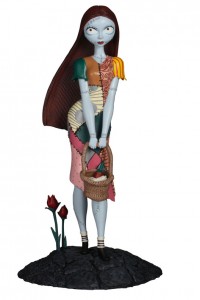 A Diamond Select Toys release! She’s no nightmare! This static vinyl figure of Sally from Tim Burton’s The Nightmare Before Christmas depicts the shy, stitched-together girl holding her basket of food on a stony path in Halloween Town. With a detailed sculpt and exacting paint applications, this approximately 9” scale figure is in scale with other Femme Fatales statues. Packaged in a full-color window box. Sculpted by David Cortes! (Item #DEC152124, SRP: $45.00) 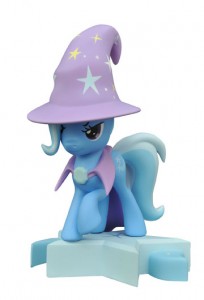 A Diamond Select Toys release! Behold the great and powerful Trixie! Famous magician Trixie Lulamoon is the next vinyl bank in the My Little Pony series. With a detailed sculpt and paint, this cartoon-accurate rendering of Trixie is not only a beautiful collectible, it’s also a bank –your loose change will magically disappear into the coin slot in her base, and a hidden access door makes it re-appear when you need it! Now that’s magic! Packaged in a clear polybag. (Item #DEC152125, SRP: $22.99) 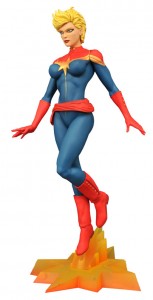 A Diamond Select Toys release! Prepare to marvel at the new series of Femme Fatales PVC figures based on the heroines of the Marvel Universe! DST’s Marvel Femme Fatales line kicks off with none other than Captain Marvel herself, the heroine who lives up to her name alongside the Avengers, as well as on her own, thanks to her alien-derived super-powers. This static plastic figure of Carol Danvers is in 9” scale, and features a detailed sculpt and an exacting paint process. She comes packaged in a full-color window box, and will soon be joined by more of the women – and men – of the Marvel Universe! Sculpted by Alejandro Pereira! (Item #DEC152122, SRP: $45.00) 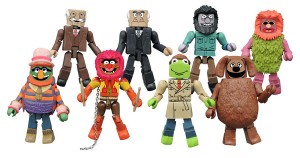 A Diamond Select Toys release! The show must go on! The most sensational, inspirational, Muppet-tational Minimates line ever is back, with another assortment of Muppet characters! Series 2 includes four new two-packs – Reporter Kermit with Rowlf, Dr. Teeth with Animal, Statler with Waldorf and Crazy Harry with Mahna Mahna! Each 2-inch Minimates-mini-figure is fully poseable and fully interchangeable with other Minimates! A must-have for fans of the new TV hit or the old TV classic! Each two-pack is packaged on a full-color blister card. (Item #DEC152116, SRP: $9.99/two-pack) 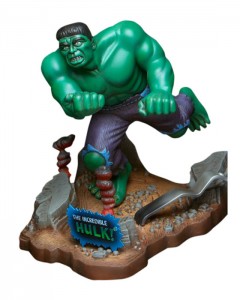 A Diamond Select Toys release! It’s a smash from the past! This model kit of the Hulk depicts the occasional Avenger in a full charge, racing across a rubble-strewn landscape. A reproduction of the original 1960s Hulk model kit by Aurora, this re-creation scales it up from 1/12 scale to 1/8 scale, making it nearly 11 inches tall! Assembly is required – simply glue the pieces and paint the figure, and this retro-style Hulk will be smashing his way across your desk in no time! Packaged in a full-color box with retro artwork. (Item #DEC152123, SRP: $34.99) 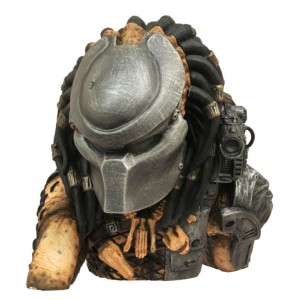 A Diamond Select Toys release! No more hunting for loose change! Simply keep this detailed bust of a masked Predator from the classic film in a convenient location, and the coin slot on his back will provide a handy place to leave your pennies and nickels, while the access door lets them out again. The detailed sculpt and exacting paint applications make this a high-quality collectible, as well as a fully functional bank! Approximately 8” tall. Packaged in a clear polybag. Sculpted by Eli Livingston! (Item #JUL148445, SRP: $22.99) 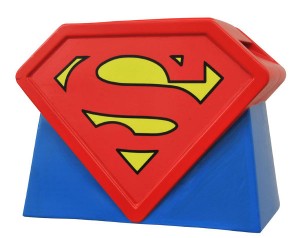 A Diamond Select Toys release! You’ll feel more powerful than a locomotive every time you grab a cookie out of this cookie jar in the shape of Superman’s shield logo from Superman: The Animated Series! Measuring approximately 12” long, this ceramic cookie jar has a removable lid and holds plenty of your favorite Kryptonian treat. Packaged in a full-color box. (Item #DEC152121, SRP: $39.99)

A Diamond Select Toys release! It’s been almost 23 years since Agents Mulder and Scully began investigating strange phenomena, and now they’re one of the strangest phenomena of all! This Minimates box set includes 2-inch mini-figures of Mulder, Scully, Flukeman, and the Cigarette-Smoking Man with removable trenchcoat, all based on the original episodes, and each with 14 points of articulation. Packaged on a full-color blister card. (Item #DEC152117, SRP: $24.99) 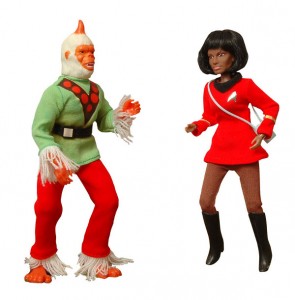 A Diamond Select Toys release! The 50th anniversary of Star Trek continues with our re-releases of two more classic 1970s Star trek figures! Uhura and the Mugato are exact reproductions of the original Mego figures, complete with Uhura’s tights, and the Mugato’s stylin’ outfit! Each 8” figure has a real cloth costume, and comes packaged in a re-closeable clamshell, so you can play with them and still keep them on the card! Accurately re-created by EMCE Toys! (Item #MAR084551, SRP: $19.99/ea.)