Hot on the heels of a wildly successful Kickstarter campaign, Tasty Minstrel Games’ Dungeon Roll is now shipping to backers and will be available next week at GenCon prior to its official release.  The promise of a light, thematic dungeon romp topped off with high quality components garnered much hype but, now that it’s here, is it as fun as we were hoping?

Designed by Chris Darden, Dungeon Roll is essentially a push-your-luck, dice-rolling game where players take on the role of adventurers who ally with a party of companions as they delve deeper into a dungeon in search of treasure and glory.  The components packaged in each retail copy of the game include a ten-sided die (for tracking the dungeon level you are currently exploring), seven party dice representing your companions, seven dungeon dice representing the encounters that await them, thirty treasure tokens, and hero cards, as well as XP tokens and rules/game aids.  During each player’s turn, they are able to roll all their party dice once to form their group of adventurers.  The six faces on each die contain a different, color-coded emblem representing either a fighter, cleric, mage, thief, champion, or a scroll. 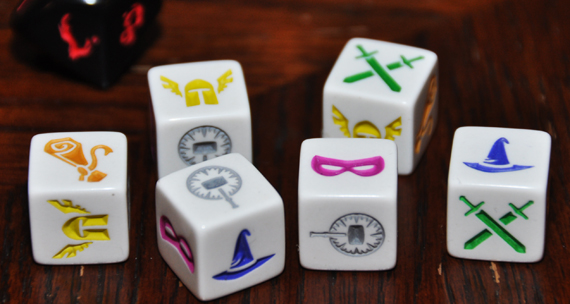 Once a player’s party is formed, they can venture into the first level of the dungeon, prompting the player to their left to roll one dungeon die.  The results these dice can yield are goblins, oozes, skeletons, dragons, potions, and treasure chests.  If a dragon was rolled, it would be placed off to the side in the “Dragon’s Lair” but all other monsters must be dealt with.  Any one party member and always kill any one monster.  This is represented by removing this party die from play (placing it off to the side in the “graveyard”) and then removing the offending monster, placing the die back in the dungeon supply.  Once the dungeon level is clear, you may choose to continue to the second level, now rolling two dungeon dice (the number of dice rolled always corresponds to the level number) or retreat to the tavern, collecting experience points equal to the dungeon level you cleared prior to leaving.

This means that players will need to weigh the odds of how many monsters they may roll versus how many adventurers they still have at their disposal – because if you’re unable to defeat the monsters in any dungeon level, you’re forced to retreat without any XP reward.  Where it gets interesting is that certain companions are more adept at defeating certain kinds of monsters.  For example, clerics can kill any number of skeletons in one dungeon level and, similarly, a fighter are able kill all goblins at once. This is extremely easy to keep track of, however, due to the aforementioned color-coding of the dice.  Both the mages and oozes share the same color, showing that, even though any one mage can still defeat any one monster of a different color, the mage can be exhausted to kill every ooze that was rolled.

Champions can defeat all instances of any one type of monster, making them one of the most coveted die results while scrolls may be used to re-roll as many party and dungeon dice as you choose.  Potions may be found when the dungeon dice are rolled and may optionally be consumed by a party die (thus using that die and moving it to the graveyard) to retrieve spent dice from the graveyard (one for each potion used) turning them to any face of your choice.  Lastly, there are thieves and treasure chests, which both share a pink color.  Thieves may always only kill one monster but may open any number of chests in the dungeon. For each chest opened, the active player may blindly draw one treasure token from the game box, which may grant one of several helpful effects.  Fighters, Clerics, Champions, and Mages may also be exhausted to open one chest each. 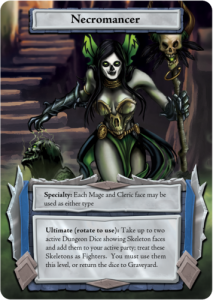 At the beginning of the game, each player would have randomly received (or purposely chosen) a hero card outlining an ongoing and special ability exclusive to that character.  While some may seem more or less powerful than others, the asymmetry makes the game more interesting overall and choosing the right time to cast your hero’s power could make all the difference.  Adding even more flavor to the affair, these heroes can be leveled up once after the prerequisite five experience points are collected. The only other item to note is the appearance of a dragon.  Remember how any dragon die that is rolled is put aside?  Well, if three of them accumulate in the Dragon Lair, you must fight the dragon before you are able to proceed further into the dungeon or retire to the tavern.  The dragon may only be defeated by moving three different adventurer dice from your party to the graveyard. Otherwise, that’s the bulk of Dungeon Roll.  As with any dice-based game, there is a pretty fair amount of luck involved, but clearly that’s what the “push-your-luck” mechanic is all about.

If everyone plays cautiously, the scores can often be rather close – it tends to be around the fifth dungeon level in each delve that things start getting pretty hairy and you really need to weigh your options.  Do you run and take your 5XP, or do you brave another level trying to one-up your opponents?  Seeing as each player only gets three delves to gather as much XP as they can, you need to make each one count.  Getting too overzealous, however, can result in a hasty retreat with nothing to show for it. After all, the only way to get your companions back is by getting lucky enough to roll several potions – otherwise, dice that were used to fight for you in previous levels of the delve can’t be re-acquired or rerolled.

As a light game of chance, Dungeon Roll works exceptionally well.  People may get different mileage out of the theme but it’s more fun if you invest yourself in the idea of dungeon crawling rather than just rolling for dice symbols.  Either way, the rules can be taught in a couple minutes and it’s extremely accessible – especially to the causal crowd.  It’s often a challenge to get my wife to play any tabletop game simply because she’s not the type to want to invest hours into the thinky Euro-titles that I typically gravitate towards.  But even she couldn’t deny the appeal of that adorable little treasure chest sitting on the shelf filled with awesome-looking dice.  Luckily, once she tried the game out, she ended up having a great time with it. The components definitely do have that “cool” factor that draws you in though – the mini treasure chest box was a fantastic idea right off the bat.  The artwork on the hero cards suits the atmosphere of the game perfectly and all the cardboard tokens pop with color (and are thick enough that you token have to struggle to pick them up from a flat surface).  Most importantly though, the dice are top notch.  I feel like, in many instances where you have a game relying on lots of custom molded dice, Quarriors for example, the quality can be all over the place, especially when it comes to paint application.  I’m happy to say that the dice in my set of Dungeon Roll look amazing. From the color palette to the eye-catching design work to the feel of the dice themselves, they definitely exceeded my expectations.

Keep in mind though that you can’t really interact with other players during their turns (aside from possibly rolling the dungeon dice if you are left of the active player).  For this reason, a four player game with only one set of Dungeon Roll will result in a bit of downtime between turns.  This can be a complete non-issue depending who you play with, but there’s always that one person in any gaming group who takes an eternity to wrap up their turn.  The issue is easily circumvented when in a group of 4-6 by playing with two sets of the game, allowing a couple people to take their delve simultaneously, but with one set I prefer a two or three player game.  Surprisingly, this title plays wonderfully as a solo game, which is usually something I avoid entirely, but Dungeon Roll comes with some nifty instructions regarding one-player scoring and even achievements to shoot for.

Bottom line is, Tasty Minstrel Games delivers a hell of a lot of fun in a tiny box with Dungeon Roll.  For its meager price point, it’s almost a no-brainer for any gamer to grab a copy for his or her collection — either for a quick gaming fix or a bit of filler between heavier titles.  Its portability and non-existent setup time make it a perfect candidate for playing while waiting in lines at all the upcoming conventions as well.  I can see this one flying out the door when it officially debuts at GenCon on August 15th.