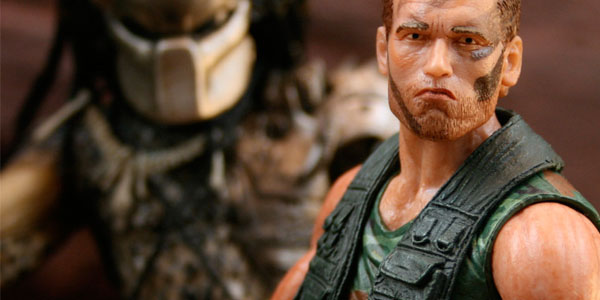 NECA’s fantastic Predator series continues with an upgrade of the Hunter who started it all, and the toy debut of his on-screen prey, Dutch Schaefer.

I’ve been impressed with the Predators series since it launched years ago, but it was the increased articulation and overall quality of the last few waves that motivated me to jump in on this collection.  And my timing couldn’t be better, and Series 8, the first to celebrate the 25th Anniversary of the franchise, delivers an upgraded new version of the Jungle Hunter from the first movie… as well as two versions of Dutch Schaefer, the special forces operative caught deep in the jungle, in a deadly game of cat and house with the creature. 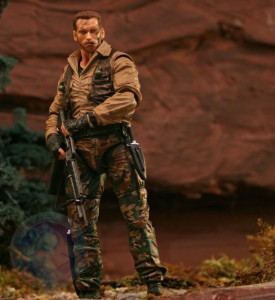 I’m not quite sure why I was so amped for the Dutch figure.  NECA has done Arnold Schwarzenegger before, in their Conan and Terminator lines, but this is the first time they, or anyone in this scale, tackled the Predator hero.  Dutch also has a ton of articulation and probably the best Schwarzenegger portraits yet going for him, making these two my personal favorite Arnold figures yet.

Dutch is available in two versions, both of which are excellent, and whose shared parts are cleverly masked, making each one feel unique.  Jungle Extraction Dutch features the soldier in his tan field jacket and gloves, chomping on that iconic stogie.  The figure features an expectedly effective ball joint neck, a great ball ab joint, shoulders, elbows and wrists, ball joint hips, half-ball knees and rocker ankles, offering many posing options.  Dutch is also armed to the gills, with a pistol, knife and machete (all with holsters) as well as a rifle which he holds perfectly. 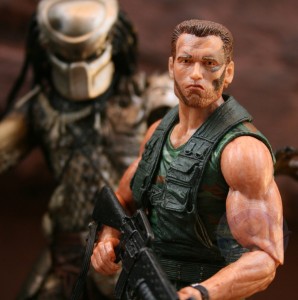 The other take on Dutch, Jungle Patrol, sees Schwarzenegger in probably his most iconic look, with a camo tank top and flak vest.  This figure matches the other’s articulation point for point, includes the same rifle, pistol and knife with holsters, and another impressive, all-new portrait.   The bare arms on this Dutch are perfectly sculpted, showing off the action hero’s iconic muscles, and the whole figure is enhanced by a great paint job that adds depth and a range of textures to the final figure– much like the clever material use on NECA’s Rocky figures, Dutch’s arms are cast in a glossier plastic, giving a sweat-glistened appearance, while his clothing is much more flat. 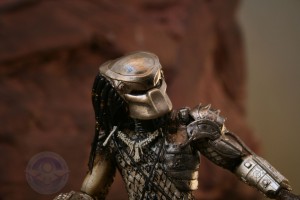 Not to be outdone, Dutch’s alien hunter foe gets an update, making the new Jungle Hunter a worthy enemy.  Jungle Hunter uses the enhanced new Predator body, which adds double knees and ball joint hips to the already-impressive base sculpt.  This Predator is masked, with a very realistic, pewter-ish shine to his faceplate and armor.  This is coupled with a subtle, grimy black wash, and the end result makes his gear appear as realistic as possible.  The shoulder-mounted plasma caster is an all-new piece, with a flip up gun, and the entire pack can be removed.  The hunter also sports three bone necklaces and his wrist blades,  which as with all the Predators, can extend from his gauntlet.

There’s a great sense of scale between these figures.  Dutch was no shrimp, but the Jungle Hunter still towers over the soldier, which is as it should be.  All three of these figures looks as if they just stepped off the big screen into real life, and their accessories and generous articulation make them incredibly fun to pose and play with.  NECA has said they don’t plan to add more platoon members/ victims to the line other than Dutch, but after seeing how perfectly realized this new Schwarzenegger was, I hope they reconsider.  To see Billy, Blain, Ponch and Dillon added to the ranks would be incredible, especially if they were all as perfectly realized as Dutch. 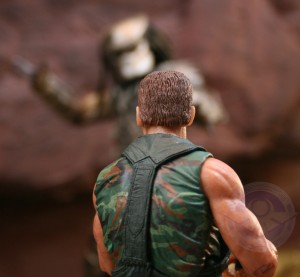 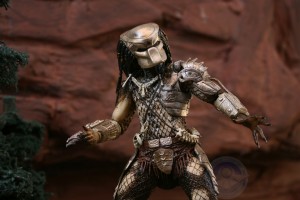 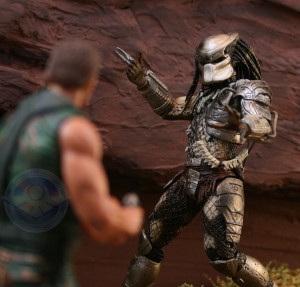 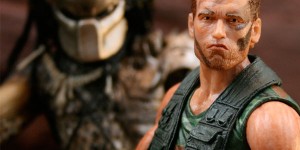 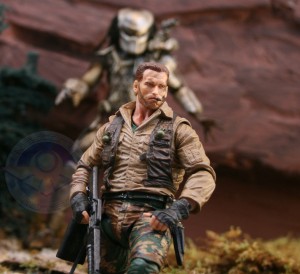 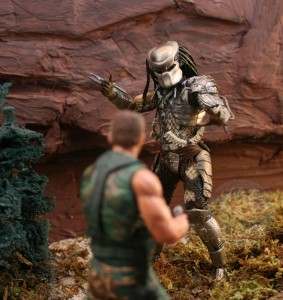 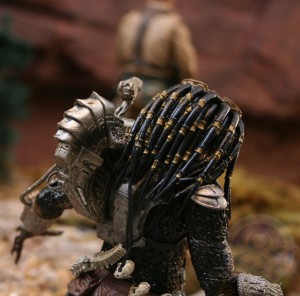