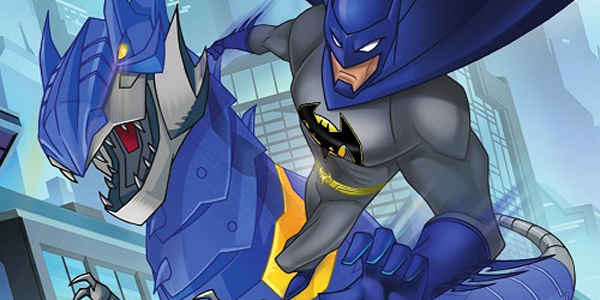 Second outing of new kid-friendly Batman animated film franchise is better than its predecessor but still has a lot of room for growth.

Earlier this year Warner Bros. Animation and DC Comics decided to take Mattel’s new kid-friendly Batman-centric action figure line Batman Unlimited and rip a page from the 1980’s with an animated home video series directly connected to the look, style, and concepts established by said action figure line. The result has been two animated films stuffed to the gills with heroes and villains yet still searching for its identity and overall appeal. While Animal Instincts, the first film in the new franchise, suffered from never really filling either of the aforementioned voids the latest Batman Unlimited full-length feature, Monster Mayhem, is at least a baby step in the right direction.

The premise of Batman Unlimited: Monster Mayhem is fairly straightforward. The Joker-led team of Scarecrow, Clayface, Silver Banshee, and Solomon Grundy get their hands on a computer virus that has the ability to systematically shut down the very technologically-advanced Gotham City and place its citizens at the whim of the Clown Prince of Crime. When I say “technologically-advanced” I’m not talking about a Tandy computer and a See & Say. You see, the world of Batman Unlimited is so tech-driven that it’s almost ridiculous. Gotham City is supremely futuristic in this series, with flying cars, shared social network servers, and a slew of other advances we have yet to see take place in our own time and place. The landscape itself is slick and stylized with sharp lines and defined edges riddled with neon lights and quirky window designs. It reminded me a great deal of Batman Beyond in this respect, although it is nowhere near as dark as the world of Terry McGinnis. While Animal Instincts was the first film in the film series I do feel that this film gives us more of a feel for the technological marvel and how its inhabitants deal with their day-to-day existence. And how do they deal?

By being WAY too connected to technology.

The Joker’s plan of unleashing his computer virus is a threat because said virus would practically destroy Gotham City and make it much harder for Batman and his crew (Red Robin, Nightwing, Green Arrow, Cyborg) to thwart the supervillain’s plot. Most of Batman’s actions in this film consists of him using some kind of weapon, accessory, or accompaniment that relies heavil on technology. Ollie, Dick, and Tim have gear and weaponry equally littered with technological over-reliance. Cyborg is all tech – – wow.

And that’s about where the genius ends for Monster Mayhem.

Monster Mayhem is really imperfect. First glaring imperfection is the name of the film.There is nothing monster-related in this film. I guess the creators of the film went this route due to all of the enemies being creepy in nature and having Grundy and Banshee break out of Arkham in the opening scene of the film but as far as I’m concerned that is grasping for straws. I’m also left to wonder why anyone on The Joker’s team would want to work with The Joker. Literally every member of the evil quintet in Monster Mayhem is a loner yet, somehow, they are all doing just fine following Joker’s direction and doing things the Joker way. If cartoons and comic books have taught me anything this is a recipe for mutiny! On top of all that the animation has moments where it looks like Warner Bros. Animation is phoning it in, with weird posture and motion sequences peppered throughout the film that look like an animator decided to take shortcut hoping no one would noticed.I noticed damn you! I noticed!

All issues I have with the film aside it really isn’t a bad way to spend ninety minutes. Monster Mayhem is pretty fun, has a decent overall sense of humor, and fairly decent pacing that keeps the action coming. The voice talent consists of voice actors who have played their roles before in other DC animated features, Lego and otherwise, and it shows. This film improves on the shortcomings of its predecessor in many ways, making it that much more watchable and immersive overall experience. For a cartoon based on kids toys what more can one ask for?

In the end Batman Unlimited: Monster Mayhem is fun but flawed. Those flaws, however, don’t heavily diminish the enjoy-ability of the film like they did with for me with Animal Instincts. While I enjoyed it for what it was I do have to add that I am not the audience for this film. This film is aimed at the same audience that buys the figures from the toy line. With that in mind this movie, this series as a whole, is a modern throwback to an age where every cartoon was tied to a toy line and carries many of the pros and cons those cartoons and toy lines usually deal with. I do believe that Warner Bros. Animation could do a little better overall with the Batman Unlimited film series than they have and really make it a worthwhile and solid cartoon companion to the toy line but I’m not going to hold my breath. Why?

They are toy commercials in the truest sense of the words. And when you look at them that way? Monster Mayhem ain’t half bad.

Thanks to WB Animation for this copy to review