DVD Korner: Fighting Crime in a Future Time with Best of COPS Volume 2 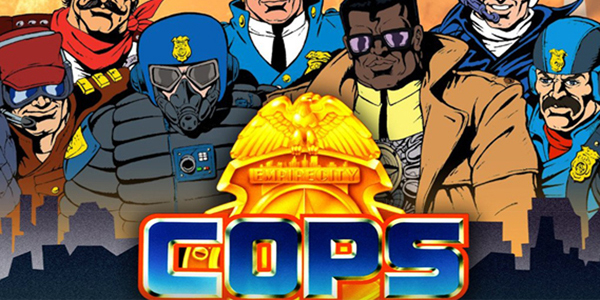 COPS is one of those forgotten franchises of the 80’s. Intended to jump on the Robocop craze (and capture their previous success with GI Joe and Transformers), Hasbro’s futuristic police force featured one of the best toy lines of the late 80’s, as well as a cartoon to support it. I had fond memories of the COPS series as a kid, but not all of the 80’s toons hold up over the years… so how did COPS fare? Read on to find out…

Cookie Jar has been releasing several less-know 80’s cartoons on DVD, and one of those is COPS. Set in the near future in the fictional Empire City, COPS tells the story of cyberCOP B.P. Vess and his team of specialized super COPS as they attempt to take down crime boss Brandon “Big Boss” Babel and his gang of crooks. COPS was always one of the weirder and darker Hasbro properties when it first aired– the commonplace integration of cybernetic parts in both the heroes and villains, some disturbing sequences like the hail of gunfire which mortally wounds Vess before his cybernetic resurrection, and the slightly dystopian future of Empire City are things that always stuck with me as a kid, and re-watching the show now the broader concepts at play are just as strange as ever. I actually think this bizarre, dark world in a kids show was ahead of its time– there’s a lot more dark edges to today’s cartoons and COPS was one of the precursors to this in the 80’s (along with other classics like Inhumanoids). If Hasbro was so inclined, I think a modern reboot of the COPS universe could be a pretty big hit, and the overall concept wouldn’t need much tweaking at all to feel modern and edgy.

The show itself, however, doesn’t quite measure up to the wild and weird larger concepts. It was enjoyable to catch up on the show again after all this time– I still love the structure of the episodes, as each one is presented as a COPS case file, narrated by BP Vess at the beginning and end of each show. As is common with most 80’s cartoons, each 22-minute episode is a self-contained “case,” usually involving the COPS attempting to thwart whatever crime is being orchestrated by Big Boss and his various underlings in the Gang. The stories are simple, and the character voices are pretty all over the place (Vess in particular is so wooden in his delivery I can’t help but wonder if this was intended as a dig at the stereotypical awkward social behavior of some police officers). The designs are cool, and as I said the overall weirdness of the characters and their tech– especially the casual inclusion of cybernetic parts in so many villains and heroes– makes them a visually interesting bunch. It is odd that all of the COPS are portrayed with superhero-level bodies, all barrel chests and bulging biceps, since Hasbro’s other properties like Joe and the humans on Transformers were much more normal in their builds.

Best of COPS volume 2 gives us eleven episodes of the series, although it only advertises ten and calls the final one a bonus feature. Aside from this extra episode, the DVD features a small gallery of key art from the show, and a trailer for Jaycve and the Wheeled Warriors, another less-remebered 80’s cartoon also being released. It’s a little disappointing to see so little supplemental material here, but the life of COPS was over well before the DVD age, and while it holds up fairly well it never found that pop culture niche that helped keep shows like MASK right on the edge of nostalgic love of the 80’s in the bigger pop culture spectrum.

This DVD really left me with two impressions overall… the first is that COPS held up fairly well compared to other 80’s shows. While the plots and acting are kind of weak, it’s a nice throwback to something I loved as a kid, and while simple the writing never got eye-rollingly bad in this collection. But what struck me even more was how well I think this franchise could do if Hasbro decided to reimagine it for a modern audience. If handled correctly, the dark, weird world of COPS could strike a chord with not only today’s kids, but fans of dystopian future sci-fi in the vein of Phillip K. Dick and even Suzanne Collins.