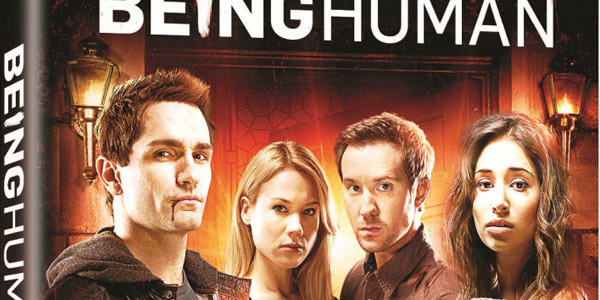 The monster house is full of danger and bad luck, so when everyone gets what they want in season 3 is that really a good thing for our favorite monsters? Check out all the season has to offer and the extras on the Being Human Season 3 Blu-ray set.

For the last 2 years Aidan has wanted a world without vampires, Josh wanted to be rid of the wolf, and Sally wanted to be alive again. In season three the writers gave each what they wanted, but as with all things be careful what you wish for. Everything goes wrong for our monsters, and Boston gets turned into a battle zone for their personal demons. The season is full of new vampires, a vengeful father wolf and a friendly wolf, and a witch who likes to eat zombie ghosts. Although the front end of the season is full of the monsters dealing with their lives alone, it is when the season comes to a close and they all work together that the series really shines. The core of the roommates is the heart of the show, and it comes trough in the final scenes of the season. I won’t spoil it for those of you watching for the first time, but there might be a tear or two shed as they wrap up the season. The show ends as always with big cliffhangers, and some possible game changers for the forth season.

This 48 minute featurette goes through every aspect of the third season. If you have not watched the season yet, save this featurette for last, because it is full of spoilers. The featurette goes through each of the characters explaining their journeys through this new season. It also goes into detail for all the villains of the season the relationships. It is a mix of planned interviews, on the set goofing, and a look behind the camera going fans of the show a look at what goes into making the show. There is also a rather comical look at the stunts, showing off how much Aidan is beaten up in the third season. They also go in-depth on how the werewolves are created. It is an interesting look at how much work is put into the lighting and movement of the environment around the CGI wolves. They wrap up the featurette talking about going back to the heart of the show, the relationship between the roommates. The writers make sure that all the characters have their own arcs, but it always comes back to dealing with issues together.

One great additions for fans of the show is the SDCC 2013 Being Human Panel. Going to SDCC is expensive and getting into the panels can be rather difficult, so this allows fans of the show to watch the panel from the comfort of their own homes. The sound a video quality is not the best, and some of the crowd questions are difficult to hear, but it replicates the panel experience without having to fight the crowds. One of the interesting parts of the panel is creator Anna Fricke talking about how they handle adding an antagonist in season 4. Hopefully more show will add these to their bonus features in the future.

There are also bloopers which instead of a steady stream jumping all around the season, are presented episode by episode. The cast show how much fun the set can be as they break down during some of the most serious scenes of the season. And from these scenes there appears to be a lot of dancing and singing

The cast also talks about she show ending on cliffhangers. They give fans all the cliffhangers each charter is facing when the show comes back in mid January. It is short but offer up some insight into where season four may take our monsters.

This set is great for both new and old fans of the show, so catch up before the monster house returns next week. And remember to check out our Season 3 episode recaps for all the little tidbits from the show.