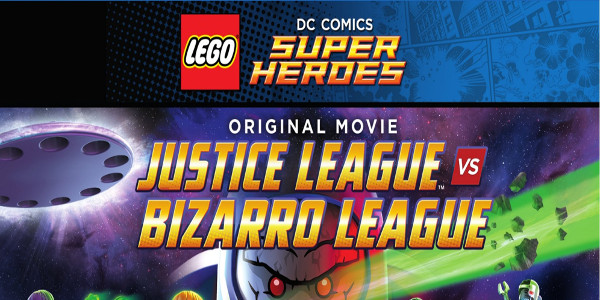 LEGO DC Comics Super Heroes: Justice League vs. Bizarro League marks the latest mash-up between LEGO and Warner Brothers Animation.  This time around we are not just focusing on Batman, but the Justice League.

In the film, Superman helps Bizarro find his own world to live on. When Bizarro’s world is threatened by Darkseid, Bizarro uses the duplicating ray that created him on the Justice League. This creates Bizarro versions of the Justice League, to defend help defend Bizarro World. This leads to a team up between the Justice League and the Bizarro League against the forces of Darkseid.

Let me say, I love this film. It is a nice, humorous and family friendly feature. It’s packed with both action and humor that’s appropriate for any age. It’s quite the departure from the rest of the DC animated features that are definitely more adult oriented. I have a 3 yr old son and thanks to him, I’ve now watched Justice League vs. Bizarro League more times than I can count. Surprised I haven’t burnt out my Blu-Ray player from the amount of times I’ve watched it.

Here the characters that are focused on are Superman, Batman, Wonder Woman, Cyborg, and Green Lantern. Hawkman, Green Arrow, the Flash, and Plastic Man show up in the opening battle as well. The Bizarro League ends up be versions of the League. In this case it’s Bizarro, Batzarro, Bizarra (Wonder Woman), Cyzorra, and Greenzarro.

The only issue I really have with it is the 44 minute run time. I understand that the target audience, children, have short attention spans, but it does make it seem tailor made to fit commercials in. But that’s minor as the story is still able to be told in the time allowed.

While I highly recommend checking this movie out, I’m afraid at the $24.98 MRP, I’m not sure if it’s entirely worth the cost.

LEGO DC Comics Super Heroes: Justice League vs. Bizarro League is now available on DVD, Blu-Ray, and Combo pack, as well as available to download at home on your favorite device.