Dynamite Entertainment and digital comics studio Visionborne have partnered to produce a special edition release of Vampirella: Feary Tales. The series is featured on the Visionbooks platform in a new format that showcases movement and visual effects in every panel of the comic book. 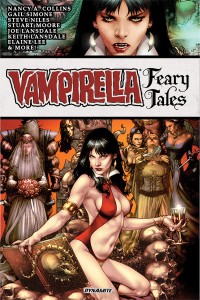 “It’s been really cool to see Vampirella come to life with Visionbooks’ technology,” says Dynamite Director of Business Development Rich Young.  “We are excited to be working with them and think fans of the character will enjoy these comics.”

“With our technology, we wanted to bring something new, engaging and dynamic to the world of comics.  Thanks to our collaboration with Dynamite, we can push the envelope even further in bringing to life one of the most iconic characters in the comic universe: Vampirella,” remarks Visionbooks co-founder, Simone Offredo.