Earth To Echo Is More Than Nostalgia 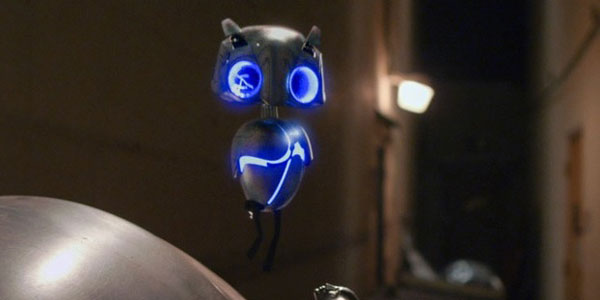 The Amblin-inspired found footage film wears its influences on its sleeve, but it goes beyond nostalgia to deliver a truly satisfying story.

If you’re even marginally into the geek pop culture landscape, you know nostalgia is all the rage.  And it can be great– if done right, nostalgia can deliver us back to a different time, resurface old feelings and connect our modern selves to who we used to be.  But nostalgia can also become a commodity, strong-arming us into a false sense of fidelity to the stuff from when we were kids, even if the modern version isn’t very good.

Earth To Echo, the new family sci-fi adventure that grew squarely out of classics like E.T. and The Goonies, understands how to make nostalgia work.  It taps into the same “best friends coming of age on an incredible journey” theme that made those sorts of films classics to begin with, and while it doesn’t LOOK like those movies, it manages to still FEEL like one.  Aping Amblin has been done before (see JJ Abrams’ Super 8), but what sets Earth To Echo apart is the keen way in which it modernizes this wonderfully old school trope.  This is the kind of movie they just don’t make anymore… but it’s made in a current style, largely thanks to its the found footage format.  Rather than feel like a gimmick, the hand held, shaky cam design of the movie feels indicative of today’s mobile-ready, selfie-driven kids, in an identifiable yet never condescending way.

This simple stylistic decision helps to modernize the classic-skewing story, which revolves around three young friends whose families are forced to move away, who discover an adorable alien creature during their big last hurrah before saying goodbye.  There is no judgement as our heroes document everything and glue eyes on their cell phones (worked into the plot as the device through which Echo the alien first communicates with them), and Tuck, Alex and Munch are all great, fully realized characters, cut from the cloth of Amblin’s best kid heroes.

Each character gets an arc as they race across suburban Nevada helping to assemble Echo’s fragmented ship and avoid shadowy agents looking to capture the alien.  I was very impressed by all three leads, although Brian ‘Astro’ Bradley’s Tuck was particularly strong.  He’s the filmmaker character, intent on capturing everything on film, and his arc– which sees him become as confident and brave without his camera as he is with it– was my favorite on-screen evolution.

Ella Wahlestedt is also great as Emma, the slightly older girl who becomes embroiled in the quest to save Echo.  I wish she had a little more to do, but she won me over in her second scene, where she rejects the fancy dress her parents try to force on her then instantly inserts herself into the kids’ mission as soon as she discovers what’s going on.

Like the movies that inspired Echo, the adults don’t typically matter much.  The kids’ mission only runs the span of a single night, and their parents don’t really interfere thanks to the old round robin sleepover trick.  We do get some quasi government agents searching for the alien, lead by Jason Gray-Stanford‘s Dr. Madsen, to serve as the villains of the story.  While these guys lack the sinister nature of the faceless agents in E.T. or the Fratelli clan, I found their bureaucratic practices and institutionalized paranoia to be a refreshing and more realistic motivation than many of the classic 80s bad guys.

As for Echo himself, the alien is delightful and charming.  With his beep-boop language, his owl-like body and glowing blue eyes, Echo features a great design, and he conveys a lot of personality despite his robotic appearance and lack of speech.  He is definitely more of a throwback than his modern human co-stars, but I was fine with this, as the little guy could very easily have been plucked directly out of any of the films that inspired him.

In a story that tries to integrate the modern technologically savvy young people into a more traditional adventure, having the focus of that adventure seem a bit retro works fine.  And Echo’s technological nature gets to play into how easily the kids come to accept and embrace him, while further distancing them from the likely differing views of their less-connected parents.

Earth to Echo is the first major motion picture for director Dave Green and writer Henry Gayden, and it certainly makes for a solid debut.  I’m typically not a fan of the found footage genre, but the script establishes some rules early on (accounting for the presence of three cameras, instead of just one) and Green sticks to those rules all the way through.  The director wisely doesn’t try too hard to replicate any of the magical Spielbergian shots etched into our brains, leaving what we see on the screen to be more straightforward.  I’d hate to use the term “amateur” about the look of the film, because it’s not– the grounded camera angles and interesting use of edits and technical malfunctions to move the story along or lessen our reliance on the narrator are very thoughtful– but the final look of the footage does seem like what a 14-ish year old boy would shoot.

Were it just a throwback to the kids’ movies many of us grew up with, Earth To Echo would be a fine, if minor entry.  It has all the makings of those classic Amblin films, from a charming creature, to a strong group of well-rounded young characters, to some bigger issues and higher stakes underlying the coming of age aspect of the story… but no real “hook” in comparison.

But that hook is actually what sets this movie apart– the keen way in which it modernizes the story through its framework, as well as the kids themselves, who come across as believable, rounded and thoroughly modern.  This movie doesn’t pander to adults OR kids, and I was delighted to hear that every young person I saw this film with was raving afterwards about how much they identified with our heroes.  Maybe it’s just because I’m getting older, but it seems that more often than not, we’re given this impression that there’s no hope for the next generation, with their faces glued to a phone screen as their interpersonal skills erode.  Earth To Echo shows kids that can cope, and even excel in this virtually connected environment, while still being kids.  It’s in everything Tuck, Alex, Munch and Emma do, and even informs their early adoption of Echo.  That a room full of kids accepted and identified with this depiction of themselves on the big screen made me feel great.  And that, for me. is the true magic of this movie.