After Earth Is A Perfectly Average Sci Fi Epic 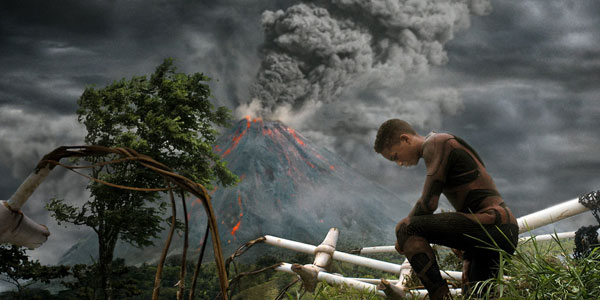 Will Smith’s sci-fi father/ son opus is high on production value and crowd pleasing melodrama, but offers little to take away after the credits roll.

I’ll be honest– I walked in to After Earth expecting a disaster of a film.  Based on an original story by star and producer Will Smith, this smelled like a vanity project through and through… an especially dangerous thing when dealing with an actor with an ego of Smith’s magnitude.  Coupled with perpetually down on his luck director M. Night Shyamalan, it seemed like After Earth could have been a near-unbearable movie going experience.  In that respect, the fact that the final movie is pretty much okay make it seem like a major victory.  Instead of a trainwreck, what After Earth offers is a pretty-looking sci-fi story that entertains, but which holds little weight.

After Earth tells the story of the unfortunately-named Cypher Raige (Will Smith), who’s basically the most awesome warrior in the history of the world (a world that takes place 1,000 years after humanity had to abandon Earth for a new home), and his young son Kitai (Smith’s real-life son, Jaden).  Standing in the impossible shadow of his Dad, Kitai is haunted by his own fear, which paralyzed him from helping his teenage sister years earlier when she was killed by one of the monstrous native inhabitants of the humans’ new home, Nova Prime.  To help the father and son bond, Cypher takes Kitai along on his latest space Ranger mission, which quickly falls off course and leaves the pair the only survivors on an inhospitable planet Earth.

Cypher is badly hurt and immobilized in the crash, and must rely on his young son to traverse the hostile environment to reach a homing beacon that will signal for their rescue.  This serves as the groundwork for the story, which can’t quite figure out if it wants to focus on getting the distant father and son to see eye to eye, or serve as a coming of age tale for Kitai, as he learns to control his fear using the film’s admittedly absurd concept that fear is an imaginary condition.  We end up getting a little of column A, and a little of column B, and a surprising lack of Will Smith in the lead role.  Yes, Cypher’s presence is often felt, but it’s very much Kitai who we follow for the duration of the film, and Jaden Smith earns the spotlight well.  I feel like this plays to the movie’s benefit, as his brash and believable teenager is much more identifiable than Cypher, who’s stoic nature and briefly sketched greatness make him more a superhero than anything.

Knowing his involvement with the story itself, this feels like a very personal and refreshingly mature tale for Will Smith to tell.  While the idea that the father and son could really only begin to understand each other when they stop communicating seems strange from the outside, from Smith’s perspective this is probably revolutionary. After Earth seems to suggest that the best thing the world’s most highly paid actor (nee, most highly skilled soldier) can do to help his son succeed is to let him go.

This concept is probably giving the film way too much credit, as After Earth really feels anything but deep.  That doesn’t mean there’s nothing to engage with, though.  Visually, the movie is strong, a vast improvement over Shyamalan’s past few duds.  The director controls his budget with far greater confidence here than in The Last Airbender, and the whole story– from Cypher’s Ranger Corps to the space suit that changes color to match Kitai’s state of mind, to the alien creature that stalks the boy on his journey– has a definite classic, pulp fiction vibe.  While the film certainly doesn’t approach the depth of any Alfred Bester novels, it seems like at least someone involved thought The Stars My Destination was really cool.

There’s a lot of this type of (putting it nicely) borrowing going on here.  While the old school approach to the sci-fi trappings are refreshing, nothing in After Earth feels very original, and references and cribbed pieces from other movies pulled me out of the narrative.  The creature, whose very presence is only perfunctorily grazed over to explain the plot device, looks like the Cloverfield monster– a mess of illogical anatomy and sinewy limbs and fangs.  It’s ability to turn invisible, and penchant for displaying its victims in the jungle are blatant lifts from Predator, and the movie is filled with similar designs and character moments that feel more like cribbed content than homages.  I’m all for re-purposed and referential storytelling– it’s great for movies to show their love for their roots– but After Earth feels like it takes things too far.  As the film borrows heavily from movies from Tron to Finding Nemo, and even Scientology (thankfully, not as much as originally rumored)… it doesn’t leave much space for anything we haven’t seen before.