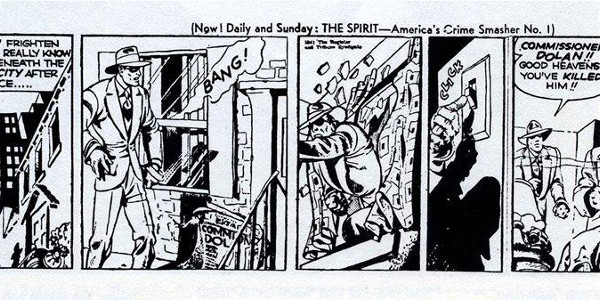 75 years ago, in 1941, although busy with the Sunday supplement Spirit section (launched the year before) and other work, Will Eisner was offered the holy grail for cartoonists of his generation: the opportunity to do The Spirit as a daily strip. Eisner leapt at the offer, and The Spirit syndicated comic strip launched on October 13, 1941.

Syndicated cartoonists were the rock stars of that era, and Eisner was eager to become one, and not just for the financial prospects it offered. Ashe said that year in a famous Philadelphia Record interview about the project, “The comic strip…is no longer a comic strip but, in reality, an illustrated novel. It is new and raw in form just now, but material for limitless intelligent development.” Perhaps the only comics artist of his generation to speak in such terms, Eisner was eager to explore what could be done with the venerable comic strip medium.

The Spirit daily strip lasted more than three years, and Eisner found it to be a very different type of sequential art challenge than the comic book story that, even at age 24, he was already a master of. Tonight, a panel of Eisner experts, including AL JAFFEE (Mad magazine legend and Eisner studio veteran), DENNIS O’NEIL (longtime editor and writer of Batman), BRENDAN BURFORD (Comics Editor at King Features Syndicate) and moderator DANNY FINGEROTH (author of Disguised as Clark Kent: Jews, Comics and the Creation of the Superhero and Chair of Will Eisner Week), will show samples of—and will discuss the historic significance of—The Spirit syndicated strip, as well as it’s place in Eisner’s artistic development.