Will Eisner Week 2016 Is Coming 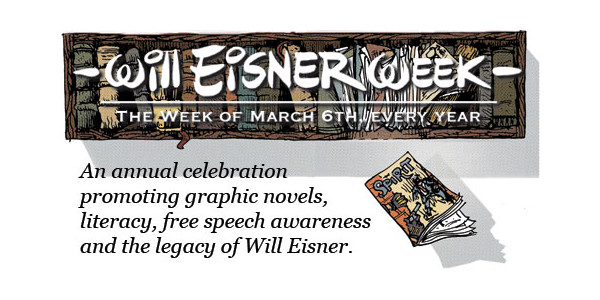 WILL EISNER WEEK 2016 CELEBRATES GRAPHIC NOVELS, FREE SPEECH, AND THE LEGACY OF COMICS VISIONARY WILL EISNER

The Will & Ann Eisner Family Foundation is pleased to announce Will Eisner Week 2016. This series of events—held annually in March—is now celebrated worldwide, with events focusing on graphic novels, sequential art, free speech, and the incredible legacy of Will Eisner, one of the most innovative and influential figures in the history of comics and graphic novels. Will Eisner Week’s central theme, “Read a Graphic Novel!” continues to be the underlying message for all the events. Will Eisner Week events are presented in universities, art schools, libraries, museums, bookstores, and comic book shops in the weeks around Will Eisner’s March 6 birthday.

“Last year, Will Eisner Week, was truly a global event,” says Will Eisner Week Chair Danny Fingeroth. “Programs were hosted across the globe in cities such as Angouleme, France; London, England; Glasgow, Scotland; and Rio de Janeiro, Brazil. Here in the U.S., events were held in cities including New York, Cambridge, Austin, Baltimore, Gainesville, Los Angeles, San Diego, and Portland, Oregon. The growth in programming and ideas has been phenomenal!”

Will Eisner Week 2016 promises to be even more exciting and event-filled. Dozens of inspiring and engrossing events in celebration of the week and of Will Eisner are being planned once again across the nation—from Cambridge to New York, San Francisco, Portland, and Anchorage, Alaska—by returning and new organizers, in a wide variety of venues. They will be joined internationally by organizations in the United Kingdom, Brazil, Italy, and other countries.

About WILL EISNER:
Will Eisner (1917-2005) grew up during the Great Depression in the tenements of the Bronx. He was a pioneer in the creation of comics during the “Golden Age” of the 1930s and ’40s, achieving fame with his noir crime-fighting hero, The Spirit. Many comics greats worked with Eisner including Jules Feiffer, Wally Wood, Jack Kirby, Al Jaffee, and Mike Ploog. 2015 marked the 75th anniversary of The Spirit. After The Spirit ceased publication, Eisner, with his strong business acumen, turned to creating educational and instructional “sequential art” (a term he coined), for business, educational and industrial use. In 1978, Eisner once again reinvented himself—and the medium—with his seminal graphic novel, “A Contract with God.” Will Eisner’s more than 20 graphic novels and three textbooks are still in print, in 15 languages, all over the world. The prestigious Will Eisner Comic Industry Awards, the “Oscars of the Comics Industry,” are presented annually at San Diego Comic-Con. 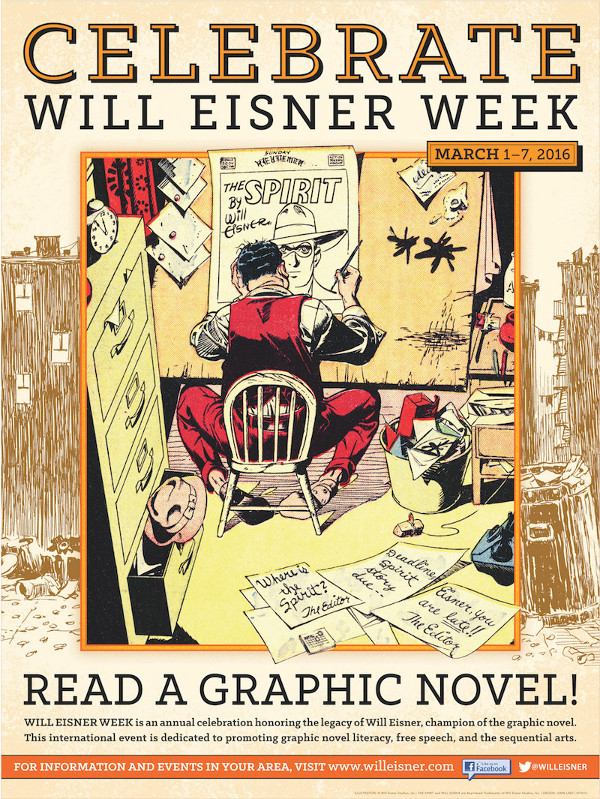