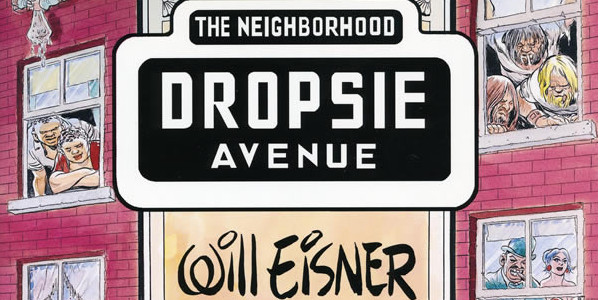 Witness the birth, death, and rebirth of a neighborhood.

In our last entry for Will Eisner Week 2016, we take a look at Dropsie Avenue. Dropsie Avenue tells the story of a neighborhood in the South Bronx and all the changes it went through the year. It’s fictional but yet it’s similar to the one writer/artist, Will Eisner, grew up himself.

The story starts around the year 1870 with the Dutch settlers.The Dutch do not like the fact that the English have moved into their neighborhood. Pretty soon, the neighborhood is predominantly English. Then tensions rise again when the Irish start to move in. The Irish then have an issue with the Germans moving in. And so on and so on. With each new ethnic group moving in, there’s tension for those who are currently living there. We see this over a span of 120 years.

Within the story, so characters are spotlighted for a while, but in the end, the main character is the street itself. Who just adapts as things change around him.

Eisner really did his research on this one. I really find it interesting the “changing of the guard” of the neighborhood as new people come in.

Dropsie Avenue really gives the reader an idea of what urban life was like. It doesn’t matter what ethnic group you are, there are parts in Dropsie Avenue that everyone can relate to.

Dropsie Avenue is either available as a solo book or as part of The Contract with God Trilogy: Life on Dropsie Avenue collection.