Elasti-Girl Brings Us Closer To A Complete Doom Patrol 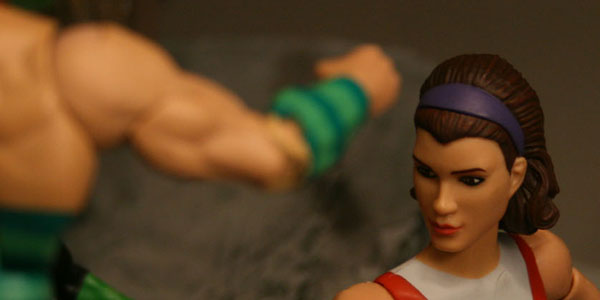 Mattel’s Infinite Earths subscription delivers another long-awaited figure to the DC Universe, and Elasti-Girl starts to round out the Doom Patrol.

One of the promises Mattel made when they first introduced the Club Infinite Earths subscription was the ability to complete teams they had started in their long-running retail line. It came as no surprise, then, that they announced Doom Patrol’s Elasti-Girl as one of the sub’s deluxe figures. The size-altering heroine was allegedly planned as a Collect-N-Connect candidate for DC Universe Classics, but when that never came to be adding her to the subscription seemed like a sure thing.

I have been waiting for Rita Farr’s figure since I first heard buzz of the C-N-C, because A) Doom Patrol rules, and B) she’s one of the last core members of the team Mattel has yet to do.  With Rita at last added to the collection, there’s really only two or three more potential members of the team to capture in plastic, but truth be told I think they’ll feel 100% as soon as we get Mento. 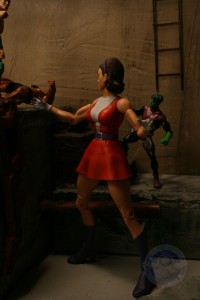 That’s talk for another day, though– let’s talk Elasti-Girl.  The size-shifting hero’s powers are depicted not unlike the JLU Giganta, with this figure actually including two versions of Rita– one giant-sized version clocking in at about 11″ tall, and a tiny solid plastic version, giving two distinct options for the Doom Patrol display.

Elasti-Girl sports a nice, all-new portrait with her signature hairband and a short, 60’s style haircut which suits her retro feel perfectly. While the Four Horsemen have struggled with female faces in this series over the years, I find it interesting that we get two of their better-executed ladies in a mere one month of the Matty Collector sub, between Rita and Poison Ivy.

The actress-turned-hero is depicted in her classic Doom Patrol costume, with a red shirt and skirt with purple highlights and the white V-shape shared by her teammates.  The shade of red and the grey-tinted white of her outfit blend in very well with Negative Man, the other team member wearing the same colors, which makes for a great sense of uniformity amongst the teammates.

Rita shares a similar articulation pattern with Giganta, with ball hips that offer an outstanding range of motion, even with her soft rubber skirt in place, and a new-style half-ball ab crunch that keeps her sculpt very intact.  For many collectors, I’m sure Elasti-Girl would simply be considered a cool looking, well done figure, whose large (or small) scale makes her stand out amongst the collection.  For a diehard Doom Patrol fan like me, she’s the latest excellent translation of the classic character into toy form, every bit as good as the outstanding Robot Man and Negative Man, highlights of the overall DC Universe series.  Elasti-Girl is fantastic, and she’s making me more anxious than ever to see Mattel release a Mento (and maybe Niles Caulder?) and round out the core cast of one of DC’s best–and weirdest– superhero teams.

Check back tomorrow for a look at Poison Ivy, the second lady in this month’s Club Infinite Earths series! 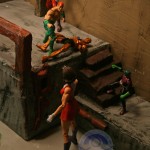 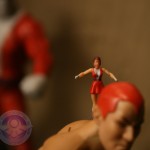 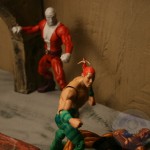 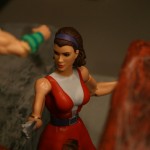