Elysium Exists High Above The Rest 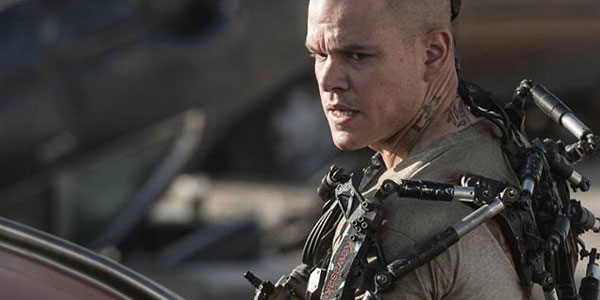 Neill Blomkamp returns with another socially minded sci-fi film that hovers high above most summer blockbusters.

When Neill Blomkamp released District 9 in 2009, it took most film goers by surprise, with equally strong story, visuals and a sense of style that made it something special.  While not as mind-blowing as that debut, Blomkamp’s Elysium remains a strong, incredibly well-made film, with the same sense of real-world urgency that made District 9 one for the ages.

Elysium tells the story of a split society in the not very distant future, in which the rich and powerful have left Earth for an Eden-like space station called Elysium.  But just because they left doesn’t mean this “one percent” has divorced themselves from Earth– while the rest of humanity has been left behind on a polluted, over populated dystopian Earth, the powers that be on Elysium are still very much in control of them, watching the lives of the less fortunate on their satellite security cameras and relying on them to staff the slave labor factories that manufacture the robots and technological spoils that the residents of the space station enjoy.

It’s against that backdrop that we meet Max, Matt Damon’s former criminal who’s trying to live as honest a life as he can in this world gone wrong.  Since he was young, Max dreamed of being one of the fortunate few who can become a citizen of Elysium, but he had long since given up on that goal… until an accident at the factory he works for leaves him dosed with a fatal amount of radiation poisoning, with no alternative for survival except to find his way into Elysium, where his terminal condition can be cured with the simple push of a button.

After the heavy social commentary woven into District 9, it should come as no surprise that much of the world built in Elysium is a rather extreme echo of our modern society– this feels very much like an Occupy movement movie, one that clearly and plainly establishes the dramatic differences between the flawless, serene Elysium and the dirty, ramshackle planet its inhabitants left behind.  The movie also makes little attempt to paint the residents of Elysium in anything but a negative light, resting on the casual cruelty on which this two-class way of life is founded.

The social commentary could easily become ham fisted and overbearing in the hands of a lesser director, but Blomkamp once again manages to present his dystopia as efficiently as possible, then delve right into Max’s story, before opening up to much broader concepts in the movie’s final act.  And like District 9, this is a film that wears many hats through its run time– Elysium transforms from a heist story, to a man on the run tale, before finally fully embracing it’s sci fi action movie roots for an explosive, expansive finale set on Elysium itself.  Juggling this many tropes and merging them into one linear narrative can be a challenge, but it’s one the director is clearly capable of, as the pacing of the film makes you forget how much is really going on, both in terms of the plot and thematically.

The biggest strength of Elysium is its acting, which is across the board stellar.  Damon infuses a charm and humanity to Max that makes him both compelling and totally relatable.  Like D-9‘s Wikus before him, Max is very much an imperfect protagonist– not a bad guy, but prone to selfishness.  While his motivations change as the film progresses, it’s clear the only reason Max volunteers for the suicide mission which will get him to Elysium is pure self-preservation, with no real sense of greater social justice.  It’s believable, and helps ground him as a real human being, even when he dons the robotic exo-skeleton that keeps him together while offering him enhanced abilities.

Jodie Foster is equally great as Delacourt, a commander of the security force that protects Elysium from threats, including immigrants trying to come aboard from Earth (who are met with lethal force).  Delacourt is painted as a villain through and through, as she plots a coup of the space station to purge the “weakness” she sees in the more politically correct administration… but in truth she’s actually just more honest and overt in her cruelty than the rest of them.  One of the tools she is unafraid to use is an agent on Earth named Kruger, played by an impossibly great and completely terrifying Sharlto Copley.  Kruger steals every scene he gets here– he’s beyond a loose cannon… a dangerous, vicious and remorseless beast of a man, whose ferocity is far too extreme for him to be employed by Delacourt, even as her go-to “means to an end” on the ground.

I don’t want to go into too much more of the plot of the film, as it plays out so well that to spoil it would take the fun away, but Kruger is the force that drives the plot as it effortlessly morphs from a crime caper, to a cat and mouse chase, to the final mission on Elysium, and he dominates every step of the way.  While I expected the allegory of the classes in this film, Kruger serves also as another bit of pointed commentary, reminding us of homemade terrorists who break away from government backers– who only believes they have them in check– creating a threat far more extreme than the one they were intended to defend against.

Elysium moves forward until we get to the space station itself, for a final act that unfolds into much broader concepts.  I found the story’s conclusion satisfying, although very, very similar to the beats in District 9.  In fact, while everything in Elysium worked– and worked very WELL– it felt a little too close to Blomkamp’s debut… the stunning effects work, the grungy, lived-in sci fi design, the narcisstic hero understanding greater social concepts, the utterly despicable powers that be in control of the society, and even the sense of sacrifice that closes both stories made this movie feel more like a straight rehash than a cinematic soulmate to District 9.

Despite its repetitive style and themes, Elysium is given the benefit of a much wider release, and (hopefully) a much bigger audience, so I’m willing to accept Blomkamp dwelling on these same ideas, especially when they are as intriguing, as well crafted, and as topical as these.  Elysium is another compelling story, told well… one that’s visually arresting enough to make sure you can get past its shortcomings, and well made enough to ensure you walk away understanding what it has to say.