Entertainment Earth has a full lineup of Comic Con exclusive items, but that’s not all– the pop culture kings will also be hosting exclusive meet and greets and signings at their booth, including creators of the Venture Bros, Adventure Time, filmmaker Morgan Spurlock, Richard Kiel (“Jaws” from the James Bond series!), and Dirk Benedict and Richard Hatch of Battlestar Galactica fame. Read on for all the details on EE’s exclsuives and their celebrity signing schedule.

Catch the excitement and join in the fun at San Diego Comic-Con International (SDCC) as Entertainment Earth® (entertainmentearth.com), booth #2343, teams up with Toys”R”Us®, Showtime Networks, Cartoon Network, CBS Consumer Products, NBC Universal, and BBC America to bring you celebrity appearances and an amazing array of 35 Exclusives.

Meet celebrities from some of the world’s most popular movies and TV series, and buy exclusive and all-new merchandise from the Entertainment Earth booth #2343.  No purchase is necessary to meet the celebrities and all signings are FREE.  Plus, anyone who purchases an item at our booth will receive a complimentary limited edition Monsuno™ Lock and Core from Toys”R”Us®, while supplies last.  Show attendees will definitely want to visit the Entertainment Earth booth #2343 in San Diego, July 12-15! 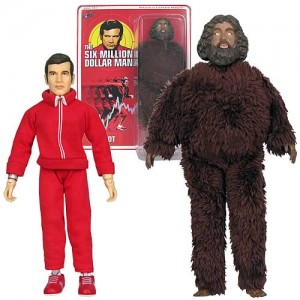 It’s been many years since a new line of The Six Million Dollar Man™ merchandise has been released, and Bif Bang Pow! is excited to bring attendees the very first items from its line when Richard Anderson, who played Oscar Goldman, kicks off Comic-Con at our booth as he signs a fantastic new gift item – a lunchbox replica of Oscar Goldman’s briefcase that includes the all-new Dr. Rudy Wells 8-inch EMCE action figure.  The Dr. Rudy Wells figure comes with three heads representing the three actors who portrayed him (Martin Balsam, Martin Brooks, and Alan Oppenheimer).  This Three Faces of Dr. Rudy Wells with Tin Tote Gift Set – SDCC Exclusive is a limited edition of 1,500 pieces ($30).  Also available will be the huge new Bigfoot 9 5/8-Inch EMCE 8-Inch Scale Action Figure that includes a limited edition keychain featuring character-specific bionic sounds ($20).  Signing time: Thursday 10:30 am to 2:30 pm. 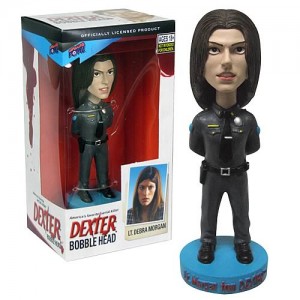 The last time we saw Dexter Morgan’s sister, she was catching him “at a bad moment.”  Now she can catch you too in the form of her all-new Lt. Debra Morgan Bobble Head ($15) as Bif Bang Pow! and Showtime Networks introduce her along with two additional 7-inch Dexter® bobble heads (Dexter Dark Passenger and Detective Joey Quinn – $15 each, sold separately), plus the brand-new Dexter Dark Passenger 3 3/4-Inch Action Figure ($10).

Witness the World Premier of Morgan Spurlock’s Comic-Con Episode IV: A Fan’s Hope™, available on DVD for the first time, with exclusive Morgan Spurlock and Joss Whedon Mini-Figures ($30), a Toys”R”Us Exclusive.  Meet award-winning writer, director, and producer Morgan Spurlock in person on Friday between 11:00 am and 12:30 pm at the Entertainment Earth booth #2343, courtesy of Toys”R”Us. 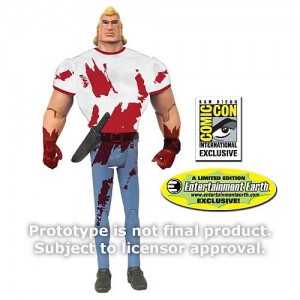 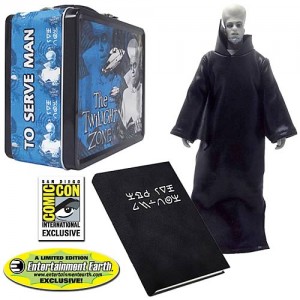 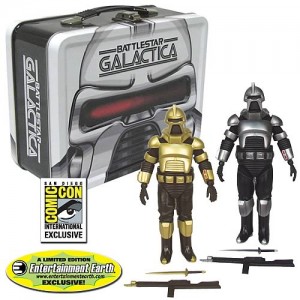 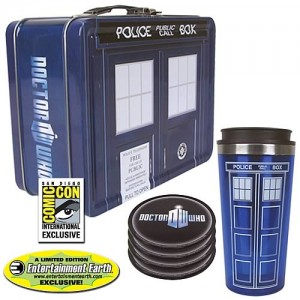 Doctor Who™ fans are in for a real treat as Bif Bang Pow! presents 7 totally new products based on the perennially popular sci-fi TV series:

(Click on any thumbnail to see full size image) 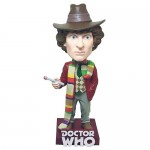 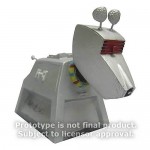 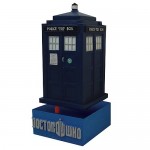 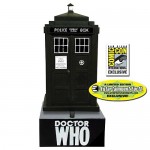 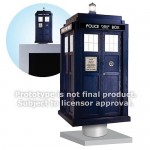 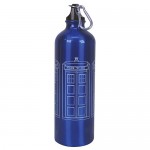 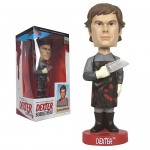 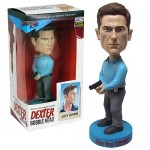 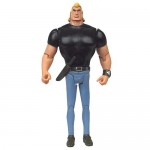 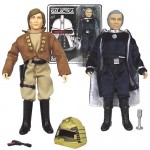 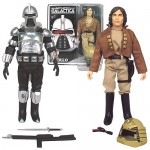 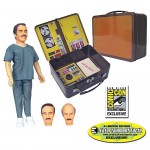 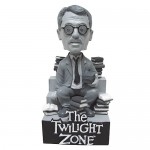 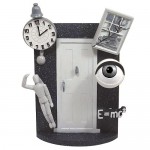 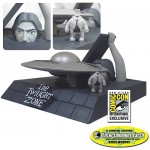 Entertainment Earth® – entertainmentearth.com – is a worldwide multi-channel retailer and wholesaler of action figures, toys, bobble heads, and collectibles with a state-of-the-art website and popular print catalog.  Founded online in 1996 and based in Simi Valley, California, Entertainment Earth offers an ever-expanding selection of over 15,000 licensed products and has pioneered best practices in the industry with innovations such as a Mint Condition Guarantee™, Risk Free Shopping, and Hassle Free 90-Day Returns.

BBC Worldwide is the main commercial arm and a wholly-owned subsidiary of the British Broadcasting Corporation (BBC).  BBC Worldwide Americas brings together all of BBC Worldwide’s businesses across North and South America.  The company exists to maximize the value of the BBC’s assets for the benefit of the UK license payer, and invests in public service programming in return for rights.  The company has seven core businesses: Channels, Sales and Distribution, Content and Production, Consumer Products, Digital Media, Magazines, and recently formed Brands, Consumers & New Ventures.  Under these businesses fall two key brands in the US – digital cable channel BBC America and a bi-coastal production arm responsible for the smash hit Dancing with the Stars for ABC.

Cartoon Network Enterprises (CNE) is responsible for building consumer products and merchandising programs for a wide range of brands by securing and supporting long-term licensing partnerships across all categories.  As the global branding and merchandising arm of Cartoon Network and Adult Swim, the division manages the consumer product programs for the networks’ award-winning original programming, brands and characters including Ben 10, Adventure Time, Regular Show, The Powerpuff Girls, Chowder, Adult Swim and more.   CNE also serves as the exclusive global licensing agent for the full portfolio of brands from Spin Master Ltd., as well as Nelvana Enterprises and Spin Master for the award-winning Bakugan brand and the PGA of America for the youth marketplace.  Cartoon Network (CartoonNetwork.com), currently seen in more than 99 million U.S. homes and 166 countries around the world, is Turner Broadcasting System, Inc.’s ad-supported cable service now available in HD offering the best in original, acquired and classic entertainment for youth and families.  Nightly from 9 p.m. to 6 a.m. (ET, PT), Cartoon Network shares its channel space with Adult Swim, a late-night destination showcasing original and acquired animated and live-action series for young adults 18-34.  Turner Broadcasting System, Inc., a Time Warner company, creates and programs branded news; entertainment; animation and young adult; and sports media environments on television and other platforms for consumers around the world.  Turner brands and businesses include CNN/U.S., CNN International, CNN.com and HLN; TBS, TNT, truTV and Turner Classic Movies; Cartoon Network, Boomerang and Adult Swim; and Turner Sports.

About Bif Bang Pow!
Bif Bang Pow!™ (bifbangpow.com) produces first-rate collectibles for such popular properties as Doctor Who™, Dexter®, The Six Million Dollar Man™, Battlestar Galactica™, Californication™, The Venture Bros.™, NCIS™, Eastbound & Down®, and The Twilight Zone™.  Founder Jason Lenzi is a seasoned television producer and the ultimate fan of cultish pop culture.  So when he created his company in 2005, he took the fan’s perspective.  His idea was to bring items to the marketplace that he himself would want to own.  Cultivated from TV, movies, books, comics, music, and more, Bif Bang Pow!’s mission is to provide high-quality action figures, toys, and collectibles to the massive cult audience (and kids of all ages) that wishes these toys were already in their collection.

About EMCE Toys  The EMCE Toys brand (pronounced “em-see”) was founded to bring playability back to toys.  Inspired by the original action figure company, Mego Corp., we strive to craft quality, durable action figures, playsets, and collectibles that recreate the sense of fun that toys were originally made for.  Our launch lines are either licensed reproductions of original Mego toys and packaging, or original creations modeled after the classic lines of the 1970s and early 1980s.  EMCE is proud to have the active input and cooperation of Marty Abrams, founder of Mego and father of the modern action figure.  We hope to continue to honor his legacy with our work.  We have also been honored to incorporate the talents of veteran artist Harold Shull, original illustrator of Mego’s classic and distinctive packaging from the 1970s.  As we continue to extend this kind of inclusion of the original Mego teams, we get closer to our goal of bringing Mego back as a viable toy company in all but name.  EMCE was created by veteran pop culture entrepreneur Joe Sena, President of SphereWerx, LLC, and craftsman Paul “Dr. Mego” Clarke.