A black and orange X-Wing in the new Star Wars movie is the latest in a line of great designs from the increasingly exciting movie.

I have no idea if Star Wars Episode VII will be good, or even watchable, but I will give them one thing– they’ve absolutely zeroed in on that sweet spot right between nostalgia, mystery and a stark yet strong sense of design.  Take the black, orange and chrome X-Wing, revealed late last week by Latino Review.  We all know this vehicle, we all love this vehicle… but seeing it in such a different color pattern– specifically one often reserved for the bad guys in the Star Wars universe– that feels genuinely intriguing to me, while also remaining firmly planted in the styleof the OT movies.

And yea, it’s toyetic as hell. 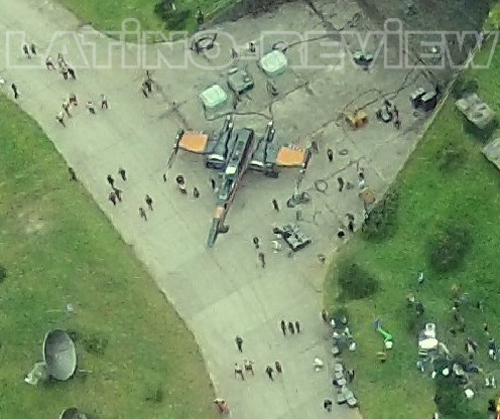 When we were getting our first glimpses at Episode I, that same sense of intrinsically connected merchandising was front and center.  I remember seeing Darth Maul for the first time and immediately saying to myself “Dude, I am SO buying his action figure!”  It sounds totally corporate and consumerist to say (because it is) but I always liked that feeling, especially in regards to Star Wars.  It was a franchise I loved, and even at the impressionable age of 18 back in 1998, I was already fully aware it was playing me… but I was more than happy to let it do so.

And yes, I’m older now, maybe a little wiser (at least less dumb?), but the leaks we have seen from Episode VII not only re-kindled by long-inert interest in Star Wars as a property, but also got me stoked for Star Wars toys again.  Hasbro already started me down that path with the wonderful Black Series 6″ line, sure, but I had planned on bowing out while they switched gears to their Ep VII stuff…

Then I saw the awesome Stormtrooper updates.  And now this cool black and orange X-Wing.  And I’m all of a sudden eagerly anticipating what other cool stuff we’ll see in Episode VII, and what we’ll see from Hasbro’s toy line ahead of time.  My fondest memory of Phantom Menace was the day the toys were released.  The whole, expansive toy line occupied half an aisle at Toys R us, and while some of the figures were familiar (or at least previously seen) characters– your Obi Wan’s and Darth Maul’s and Liam Neeson’s– there were a bunch of others who we knew nothing at all about.  “Who are the pod racers?  What’s the deal with this Boss Nass guy?” I thought.  The payoff in that particular case didn’t match the intrigue, but it still triggered that same sense of imagination in me, in my outsider attempts to put the puzzle pieces together.  It was super fun, and it kept that magical x-factor of Star Wars alive, in advance of the prequel trilogy’s release.

Now once more with this new starfighter I find myself letting Star Wars sink its hooks back into me a little deeper.  I remain cautiously optimistic, but I’d be lying if the “cautious” part wasn’t starting to erode.  By the time Toy Fair rolls around next February and Hasbro reveals their toy lineup, I might be all the way back on the Star Wars bus, sipping the Star Wars Kool Aid.*

And even if I’m not, the quality of the film does not have to impact on the fact that a black and orange X-Wing looks freaking cool.  So no matter how things shake out in a galaxy far, far away, I don’t think I’d regret picking this sucker up in toy form.