The Eternos Palace Is Complete With Filmation King Randor

Masters of the Universe Classics are winding down for 2012, and they backloaded the year with quite a motley crew. November’s entries are King Randor in his Filmation Monarch robes, Man-At-Arms’ 200X trainer Dekker, and the final entry in the 30th Anniversary, Castle Grayskullman! None of the entries are necessarily warranted releases– each come with their unique brand of fan polarity. All that said, the figures have their pros and cons, but nothing that hampers the awesome renditions of these important periphery characters. 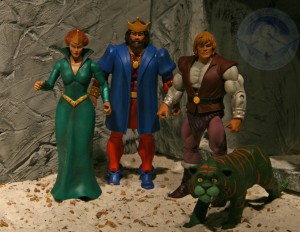 First up is King Randor. This is the final quarterly variant for the year, and what a variant to use! Interestingly enough, lots of fans were actually happy with their battle-ready monarch that already saw release. As far as I am concerned I have the Queen’s husband finally at her side in his very familiar robes. The re-used legs, lower arms, upper torso and head are perfectly married with all new shoes, upper arms, and his royal vestments. His accessories include his spear in a pearlescent yellow color, vac-metallized gold goblet with “drink,” and his medallion. He looks fantastic, but they stuck to the Filmation colors way too closely. His blues, reds, and oranges are correctly bold, but while the yellows matched nicely, it should have been gold to match his queen. 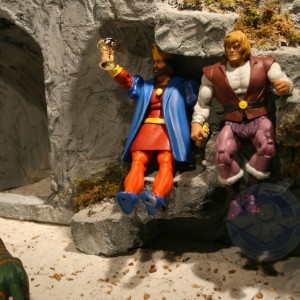 Another surprising thing not executed is the cut joint on the biceps. He easily could have had an articulation at the end of the puffy sleeves, but he is missing them. It is amazing how essential it is for posing until you don’t have it. Those small issues hardly take away from how fantastic he looks. A word of advice shared by several collectors. The medallion stays pinned to his chest with an elastic. Folks who cut it free have stated that the medallion cord make the bauble jut out. Keep the elastic in place if you don’t mind it there. It doesn’t detract from the look of the toy when displayed.

After endless loincloths, fuzzy boots, and robot arms, it’s nice to see a change up with Randor’s puffy sleeves, elf boots, and robes to visually change things up. While this Randor may not be the most relevant figure to every Masters collector, he certainly has a place with the rest of the Eternos Palace.

We go from Filmation to 200X this month, with first-time figure Dekker– Check back tomorrow for our look at Man At Arms’ mentor. 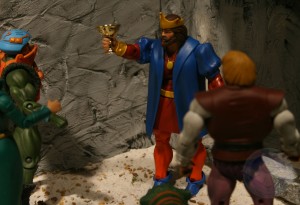 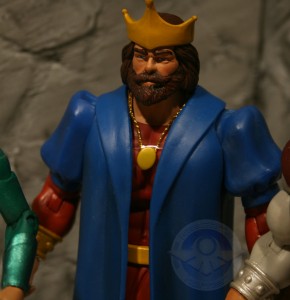