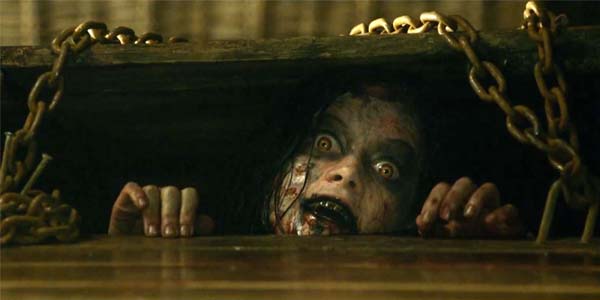 The sequel to the remake looks like it faced its last chainsaw.

The Evil Dead remake was a very divisive movie at best.  I wasn’t the biggest fan of it, despite respecting the practical effects and hardcore visuals director Fede Alvarez brought to the production.  But even as a lukewarm fan, I wasn’t really clamoring for more from this reboot of the franchise… even with the promise of Ash’s return based on the post-credits tag.

Truthfully, I’m much more keen on the TV show being developed by Sam Raimi and starring Bruce Campbell, and it looks like I’m not alone– an interview with remake star Jane Levy with Arrow in the Head makes it seem that Evil Dead 2 is going nowhere fast:

I don’t think they’re gonna make it. I mean, they’re always coming up with a new thing- now I hear they’re making a TV show. I was like, what? [Laughs] I think they just like exciting their fans and confusing them. I honestly don’t know, but it doesn’t seem like there’s going to be an EVIL DEAD 2 anytime soon. At least, not with me in it.

I guess this means they could be going forward with a movie without Levy, but since she is basically our new survivor/ hero (and with Ash dedicated to the TV show instead of a big screen appearance), that seems unlikely.  This isn’t the first setback with the new sequel– director Alvarez already left the production a while back– so maybe the upcoming TV show idea put the final nail in the coffin of this movie?

If that does turn out to be the case, I could certainly live with it.  Levy did an admirable job, but Mia certainly didn’t come close to filling Ash’s clunky shoes as a protagonist… and while the gore was cool, I missed the slapstick aesthetic Raimi added to his later Evil Dead movies.  A TV show seems like the perfect venue to reintroduce that silly angle to the story, as a clever way to soften the impact of the (hopefully) copious amounts of blood and guts we will be treated to on the small screen.

What’s your opinion? Would you prefer to see another Evil Dead movie, or does a TV show being developed by the original creative team seem more likely to help you get your Deadite fix?

Source: Arrow in the Head